'If you're coming to buy, you have two hours to do it': what it's like at London's real-life 1-54 Contemporary African Art Fair

In the absence of the major fairs and auctions, Modern and contemporary African art is in the spotlight in London this week 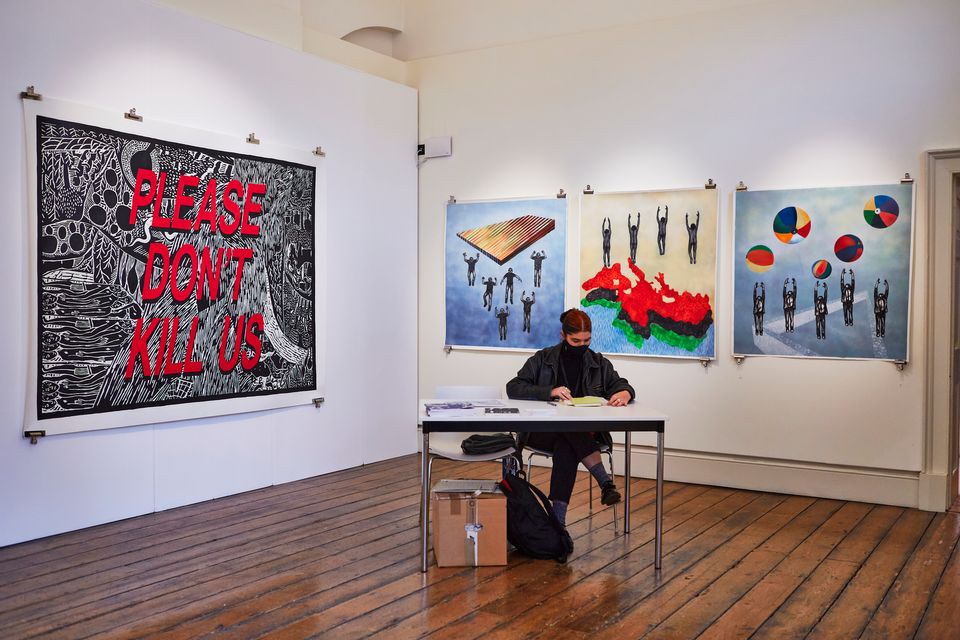 Frieze Week is normally abuzz with a cavalry of collectors, curators, dealers and art advisers who descend on London and its melee of art fairs, auctions and parties. Not quite so this year. But, in the absence of the biggest hitting events, contemporary African art is taking centre stage—some of it in real life.

The 1-54 Contemporary African Art Fair opened its doors at Somerset House early yesterday morning to a limited group of mask-wearing collectors and journalists, who were given two-hour time slots and asked to observe social distancing.

Touria El Glaoui, the founder of 1-54, concedes it has been “the most challenging edition” to organise after her first fair in 2013, but notes that “everyone has tried to find solutions to be here”. There are around a third fewer galleries than usual: 29 are exhibiting physically and a further eight are presenting works in the online version of the fair, which is being hosted by Christie’s.

Dealers, particularly those from the US and parts of Africa, have found creative workarounds to the issue of travel restrictions, even if they still have to contend with inflated shipping costs. New York-based David De Buck shipped his solo booth of paintings by the Baltimore-based artist Stephen Towns, including a new series on black coal miners in Virginia (priced around £20,000 each), and employed the UK-based artist Haffendi Anuar to man his booth. “Renting a gallery manager could become a thing,” Anuar says. “For someone like me—an artist with a history of working in galleries—it’s a neat fit.”

For dawdlers, timed entry with two-hours slots could prove a problem, but El Glaoui thinks this will focus collectors’ minds and could encourage deals. “People know that if they are coming to the fair to buy, they have two hours to do it, they can’t play around,” she says. Ekene Emeka Maduka's paintings on show with Polartics gallery at 1:54 almost sold out on the first day Photo: Anny Shaw

Collectors were indeed quick off the mark at Polartics gallery, which operates out of pop-up spaces in Lagos and London. Its solo show of paintings of life at the Catholic boarding school St Agnes by the Canadian-Nigerian artist Ekene Emeka Maduka almost sold out within the first two hours (prices range from £3,000 to £10,000).

Although collectors tend to plump for more tried and tested names during tough economic times, the demand for contemporary African art remains high, according to Polartics gallery’s director Oyinkansola Dada. As she points out: “Black figurative painters, especially women, are building a head of steam right now.” With a considerable collector base in London, Dada says Polartics is now looking for a permanent space in the UK capital.

El Glaoui thinks accessible prices are a further incentive for collectors. “There is a feeling in the US that the prices for African American artists have risen so fast, which is not the case for African artists. We always wanted steady growth and I think, with African art, we aren’t experiencing a bubble,” she says.

With question marks over whether 1-54 will go ahead in Marrakech in February and New York in May, El Glaoui says the partnership with Christie’s is ever more vital. The auction house has built an online platform for the fair and is hosting it on Christie’s website, allowing 1-54 access to its 300,000 subscribers. The auction house’s King Street gallery is also exhibiting one work from each dealer at the fair; Christie’s is taking a cut on sales until 12 October.

Dirk Boll, the president of Christie’s in Europe, Middle East, Russia and India, says the firm established the partnership “as a means of supporting the broader art market”. He adds: “We were keen to support the fair by powering the digital platform to provide greater accessibility for those unable to travel to London, and also to provide an additional exhibition space for the participating galleries.”

It is not the first time Christie’s has collaborated with a fair. Last month, the auction house partnered with the secondary market event, La Biennale Paris, with dealers consigning works to an online auction at Christie’s. Going forward, Boll does not rule out hosting auctions with 1-54. He says: “This is a collaborative partnership, and we look forward to it evolving in future years, as appropriate.”

There are no plans, however, for Christie’s to launch standalone Modern and contemporary African art sales. As Boll says: “We present artists from Africa and the diaspora in an international context throughout our sales programme. We tailor our auctions for the global collecting community, which is no longer focused on a regional perspective.” Ayo Adeyinka, who launched Tafeta gallery in London in 2013 and is exhibiting at 1-54, acknowledges the argument for bringing contemporary art from Africa into the “mainstream”, but points out there are disadvantages too. “Compare [Nigerian Modernist] Ben Enwonwu’s auction record of £1.2m with Jeff Koons, or even Peter Doig,” Adeyinka says. “At least contemporary African art sales gives you that cocoon of comparing like for like—we can be excited about £1.2m. But if you take that straight to a contemporary day or evening sale, then we are everybody’s poor cousin. There’s no other way to spin it.”

Sotheby’s has held standalone sales of Modern and contemporary African art since 2017 and this week’s online auction (bidding closes today) is expected to make £3.6m to £5.3m—the highest ever estimate for a sale in this category.

Consigning works has presented a considerable challenge for auction houses in recent months, but Hannah O’Leary, Sotheby’s head of Modern and contemporary African art, says her sale is the result of years of work. Valuation trips carried out at the start of the year before lockdown have proved fruitful and “more and more consignments are coming in through our online valuations platform, which saw a hike in activity during lockdown”, she says.

There has also been a jump in bidding online. “Our last auction at the end of March saw a 46% increase in the number of bidders in comparison to the equivalent sale last year,” O’Leary says. “Even in that moment of global crisis we still broke five world records, proving that there is strength in this market.” Among the highlights of this week’s sale is a group of 11 works by Enwonwu, who is also the subject of a presentation by Kó gallery in Frieze Masters’ online viewing room.

Kavita Chellaram, the founder of Kó, says Nigeria’s rich history of art has been “sidelined” in the past and “needs to be rectified”. She adds: “Ben Enwonwu was working at the same time as European and US contemporaries such as Henry Moore, Alberto Giacometti and Aaron Douglas—and even shown alongside Picasso. Yet, since his death, he has not maintained the same level of international recognition. Showing his work in the context of Frieze Masters illuminates the relationship between Enwonwu’s work and the international development of Modern and contemporary art.”