Art's Most Popular: here are 2018's most visited shows and museums

Fashion continues upward trend in the US, shooting to the top of The Art Newspaper's chart, while the British Museum slips from the top spot in the UK 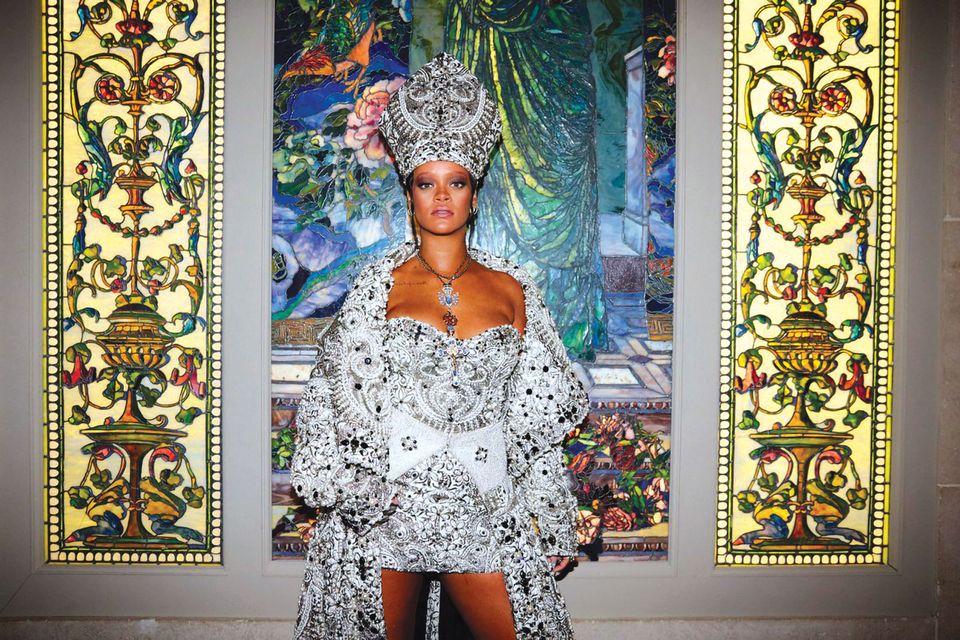 Rihanna attends the Heavenly Bodies: Fashion and the Catholic Imagination Costume Institute Gala at The Metropolitan Museum of Art © Photo by Taylor Jewell/Getty Images for Vogue

Nearly two decades have passed since the Metropolitan Museum of Art in New York last topped The Art Newspaper’s annual museum exhibition attendance survey with its 2001 show on Vermeer and the Delft School. The US institution made a spectacular re-entry into our leaderboard this year with not just the one, but the two most popular exhibitions of 2018. Heavenly Bodies: Fashion and the Catholic Imagination, a Costume Institute show that boldly mixed religious works of art—including 42 ecclesiastical pieces from the Sistine Chapel sacristy—with haute couture, was seen by nearly 1.7 million people (10,919 visitors a day), breaking the Met’s previous record set in 1978 with Treasures of King Tutankhamun (nearly 1.4 million).

The largest exhibition ever mounted by the museum, Heavenly Bodies was seen by around 1.43 million people at the Met’s main Fifth Avenue location and a further 230,000 trekked uptown to Washington Heights to see its continuation at the comparatively sleepy Met Cloisters. According to the museum, the show helped set a new attendance record for the Cloisters (349,513 in total). (The Met has not previously provided us with separate figures for the Cloisters and its Fifth Avenue locations.) The Met’s other major blockbuster of 2018 was Michelangelo: Divine Draftsman and Designer (7,893 visitors a day), which presented sculpture, a painting and more than 100 drawings by the Renaissance master as well as an Instagram-friendly digital replica of the Sistine Chapel ceiling, and which ranked second in our survey.

The Smithsonian American Art Museum in Washington, DC, helped the US secure a hat-trick with its free presentation of colourful installations by the Korean artist Do Ho Suh. A favourite with Instagrammers, 7,853 visitors a day immersed themselves in his large-scale fabric sculptures. 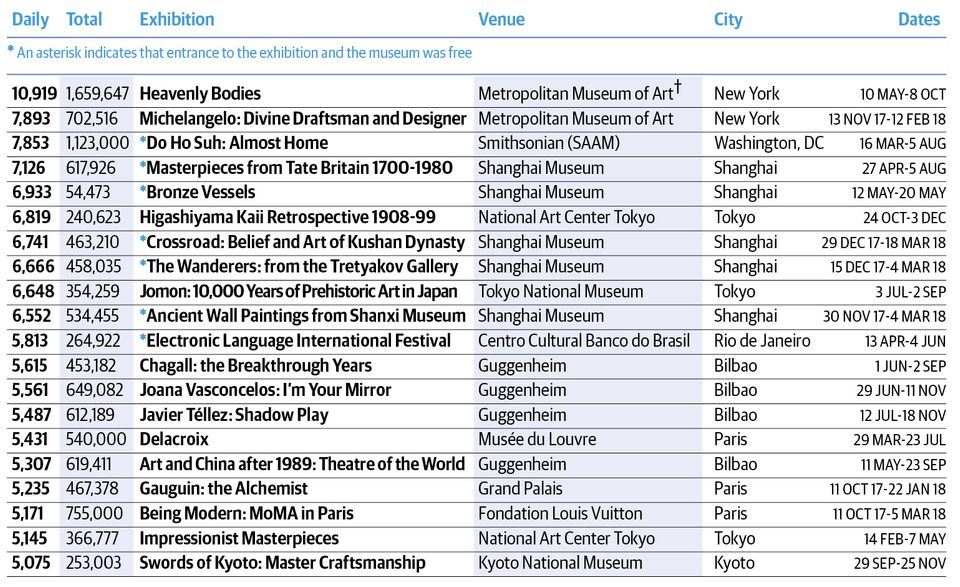 The Shanghai Museum, which boasts vast exhibition halls, hosted five of the ten most popular exhibitions in 2018, including presentations comprised solely of collections from foreign museums. Its show of masterpieces from London’s Tate Britain attracted 7,126 visitors a day (around 618,000 in total), which not only makes it the fourth most popular exhibition in our survey but has the added cachet of being the UK institution’s most visited show to date (though you had to travel 9,000km from London to see it). The Chinese museum also collaborated with the State Tretyakov Gallery in Moscow to bring paintings by a group of 19th-century Russian realists to Shanghai for a special exhibit. The Wanderers show drew 6,666 visitors a day to the Chinese museum. None of the exhibitions mounted by UK museums featured in our top 20.

The Fondation Louis Vuitton in Paris and the Melbourne’s NGV International both benefited from the Museum of Modern Art (MoMA) in New York’s decision to send works from its collection abroad during its building works. Their MoMA shows drew 5,171 and 3,312 daily visitors to the French and Australian museums respectively. Meanwhile, MoMA’s desire to give over its entire sixth floor exhibition space to Adrian Piper proved popular as the US artist’s work, which addresses issues such as racism and sexism, was a surprise hit (3,993 visitors a day). 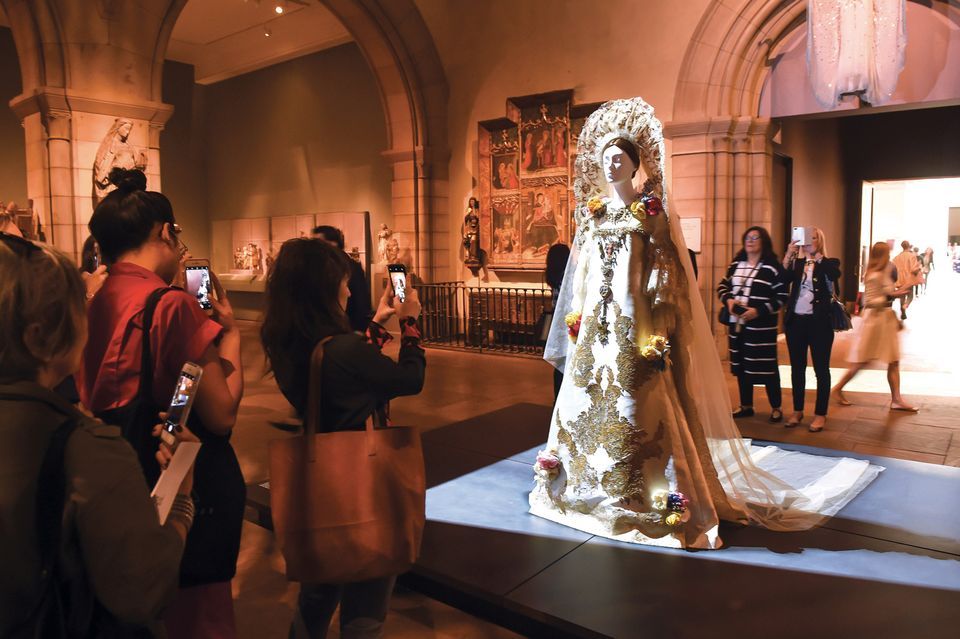 The overwhelming success of the Met’s Heavenly Bodies exhibition shows how the public’s appetite for exhibitions devoted to fashion is on the rise. The Met’s Costume Institute shows have traditionally ranked high in our survey, notably its 2011 presentation of cutting-edge couture by Alexander McQueen (8,025 daily), and institutions such as the Musée des Décoratifs in Paris and London’s Victoria and Albert Museum (V&A) have staged fashion-focused shows for years. In fact, the latter’s most popular show of 2018 let the public peruse the wardrobe of Frida Kahlo and engage with the Mexican artist on a more personal level, with displays of intimate photographs and possessions (1,823). And the V&A had to extend the run of its current Dior exhibition by seven weeks after tickets sold out within three weeks of its opening. (It will feature in our 2019 survey).

As further evidence of the fixation with fashion, MoMA’s Items: Is Fashion Modern?, an exhibition that explored the impact of fashion staples such as Levi’s jeans and the Little Black Dress was the New York institution’s first fashion show since 1944 and its most popular exhibition of 2018 (4,987). The Sorolla and Fashion show (1,418) at the Museo Nacional Thyssen-Bornemisza in Madrid, which paired portraits by the Spanish artist with period-appropriate clothing, was the institution’s third most popular exhibition. The Spanish museum is putting this winning formula to the test again with its forthcoming exhibition Balenciaga and Spanish Painting, which is due to open in June. The Wallace Collection in London is also preparing to capitalise on the public’s interest in fashion with an exhibition, due to open in June, on the shoe designer Manolo Blahnik. 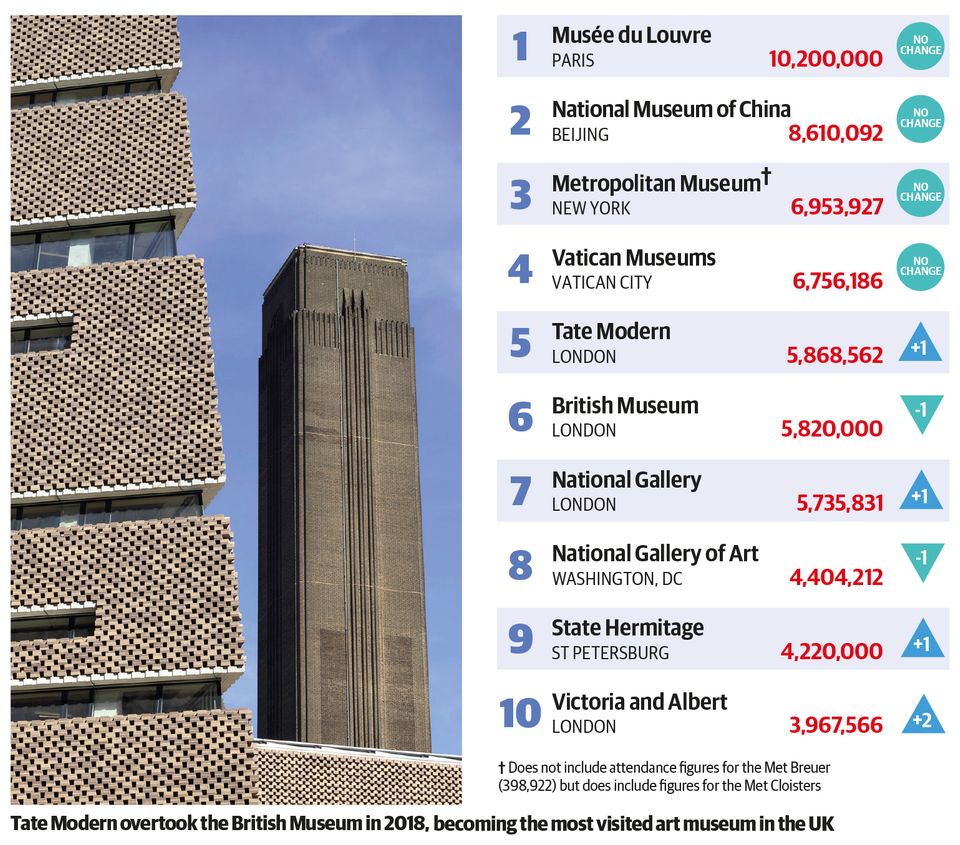 Apeshit at the Louvre

It was a record year for the Musée du Louvre in Paris, both in terms of its overall attendance and its staging of the most popular exhibition in its history. With a whopping 10.2 million visitors in 2018, the 226-year-old French institution comfortably retains its title as the most popular art museum in our survey. Its major show on the quintessential 19th-century French Romantic Eugène Delacroix was seen by record 540,000 people (5,431 a day) during its four-month run. The Louvre credits the 26% increase in total attendance on the previous year to three factors: the allure of Delacroix; the popularity of Beyoncé and Jay-Z’s music video “Apeshit”, which was shot in the former palace and shows the hip-hop power couple lounging in front of star attractions, including the Mona Lisa; and an upswing in foreign visitors to the city after a substantial dip in the wake of the deadly terrorist attacks in 2015. Paris’s Centre Pompidou and the Musée d’Orsay had an uptick in visitors, by around 180,000 and 108,000 respectively.

The Louvre’s previous record of 9.7 million visitors was set back in 2012, when it staged Leonardo and Raphael blockbusters. Its forthcoming show on Leonardo, which is due to open this October to mark the quincentenary of the Italian master’s death, is bound to give Delacroix a run for his money. Meanwhile, officials at the Louvre’s outpost in Abu Dhabi, which opened in November 2017, report that one million people visited the museum in 2018.

The National Museum of China in Beijing, which made its first appearance in our 2017 survey, retains second position in overall attendance with 8.6 million annual visitors—an increase of 550,000 on the previous year—and the Met once again takes third with nearly seven million visitors to its Fifth Avenue and Cloisters premises (7.4 million if you include the Met Breuer). The Vatican Museums holds on to the fourth slot, with an increase in attendance of around 330,000 on 2017. 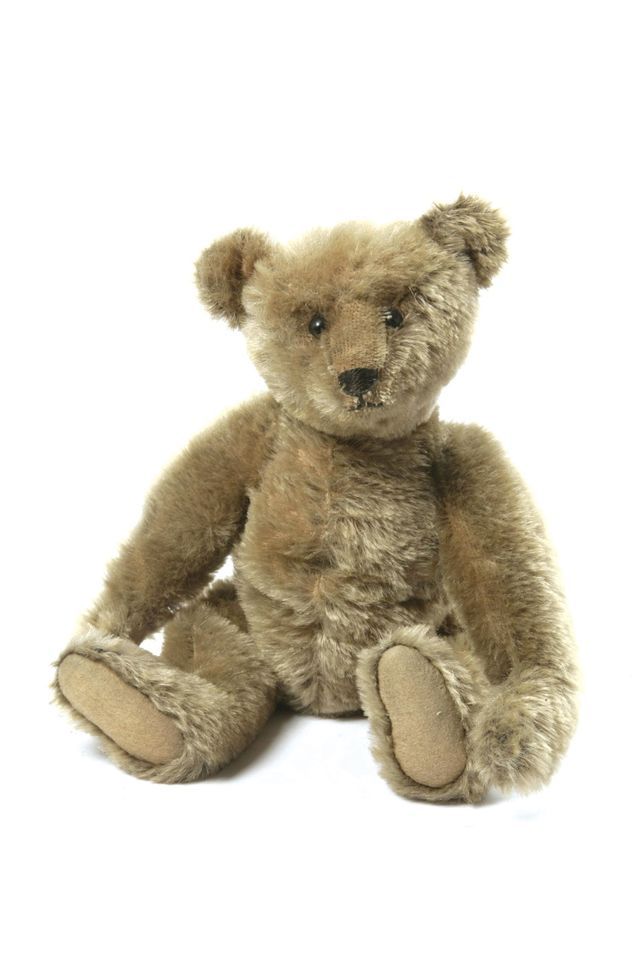 The friendly rivalry between the UK’s three most visited museums—the British Museum (BM), Tate Modern and the National Gallery—continues. Our survey has shown the BM to be the most visited museum in the UK nine times over the past decade, but in 2018 it was nudged out of the top spot by Tate Modern, which drew around 49,000 more visitors (nearly 5.9 million). The BM drops to sixth in overall worldwide museum attendance while Tate Modern occupies its former fifth position, boosted no doubt by its critically acclaimed exhibition Picasso 1932: Love, Fame, Tragedy, which focused on a single, prolific year in the artist’s life. However, having reported a worrying downward trend in visitors to UK’s main national museums last year, the overall figures stabilised in 2018 but were still 5% down from their highpoint in 2014.

Notwithstanding, the V&A smashed the record it set in 2017 for overall attendance by around 178,000 people, bringing its new record to nearly four million. After Frida Kahlo, the V&A’s second most popular exhibition in terms of daily figures may come as a surprise considering that it also had a show devoted to the Spanish fashion house Balenciaga. Around 160 more people flocked each day to see what the V&A billed as a “multi-sensory and playful” exhibition on the children’s book character Winnie the Pooh (1,181 a day) than creations by the late designer (1,021). 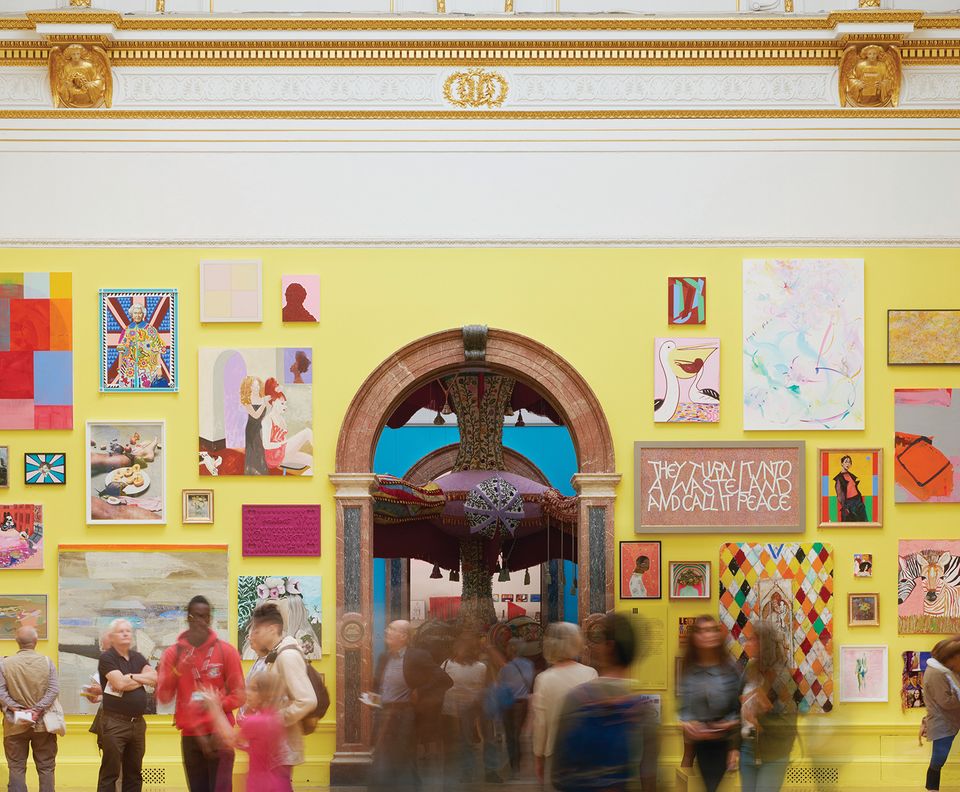 But the award for the breakout UK museum of 2018 has to go to the Royal Academy of Arts (RA), which made a splash of its 250th anniversary with the opening of a David Chipperfield-designed expansion that significantly increased the institution’s footprint—and also provided permanent free collection spaces for the first time. The inauguration coincided with the RA’s popular annual Summer Exhibition, guest curated by the artist Grayson Perry, which was seen by a record 4,296 daily visitors (296,442). Other RA shows of note were a presentation that reunited art-loving Charles I’s Old Master collection (3,250) and one that celebrated 500 years of Oceanic art (1,857). A record 1.6 million people visited the RA in 2018 compared with just over a million in 2017.

In the US, the unveiling of portraits of the former president Barack Obama and his wife Michelle, by Kehinde Wiley and Amy Sherald respectively, at Smithsonian’s National Portrait Gallery (NPG) in Washington, DC helped boost the museum’s attendance by more than one million, to 2.3 million. Locals and tourists alike turned out to marvel at, take selfies with, and even genuflect in front of the thoroughly modern portraits of the former First Couple. It remains to be seen if the NPG can repeat last year’s success this year in the wake of the 35-day US government shutdown, which forced government-funded museums to close. The Cleveland Museum of Art also topped its personal best of 719,620 annual visitors (set in 1987) by attracting 769,435 people—a 31% increase on 2017. The jump can partly be attributed to its showing of the travelling exhibition Yayoi Kusama: Infinity Mirrors (1,653). 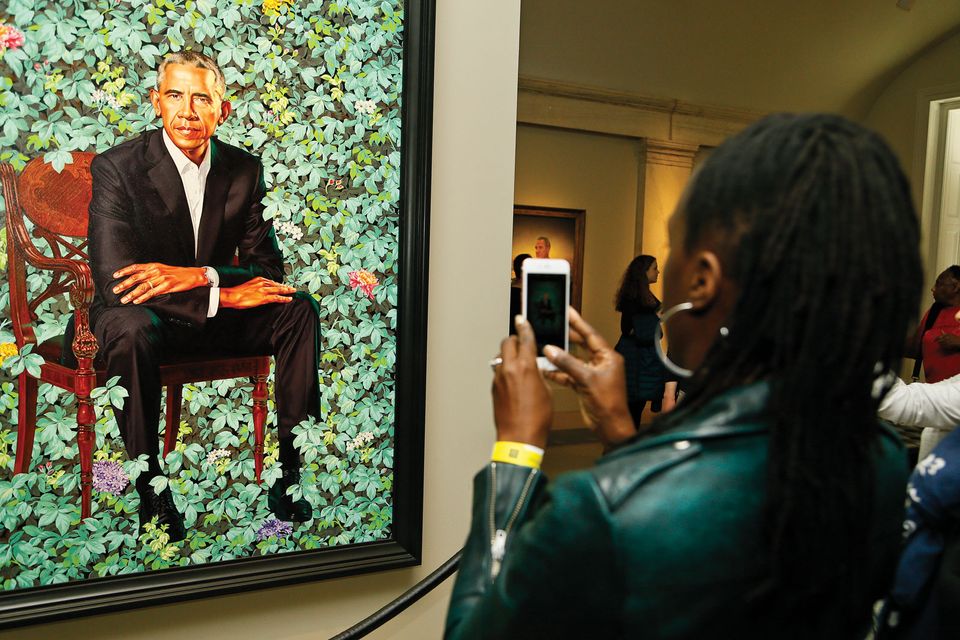 Meanwhile, in Japan, Van Gogh (4,793), the Bauhaus (2,803) and single-artist shows on 20th-century Japanese painters Higashiyama Kaii (4,311), Yokoyama Taikan (3,228) and Foujita Tsuguharu (2,530) meant that attendance at the National Museum of Modern Art in Kyoto more than trebled, from around 300,000 in 2017 to more than 1.1 million last year. But the most popular exhibition in Japan continues to be the Nara National Museum’s yearly display of objects from the Shoso-in treasury. The 70th annual presentation drew 16,707 visitors/pilgrims a day during its two-week run, but the religious nature of the artefacts puts the show in a category of its own, so it is not included in our rankings.

• The daily figures are calculated automatically by our database, which computes the number of days for which an exhibition was open using the following formula: total number of days between start date and end date, divided by seven, multiplied by the number of days a week the institution is open, minus exceptional closures.

• All of the data used were supplied by the institutions concerned.

• Some institutions offer a number of exhibitions for a single ticket: these are shown as one entry.

• Exhibitions that were free to visit—ie, neither the museum nor the show had an entry fee— are indicated with an asterisk (*).