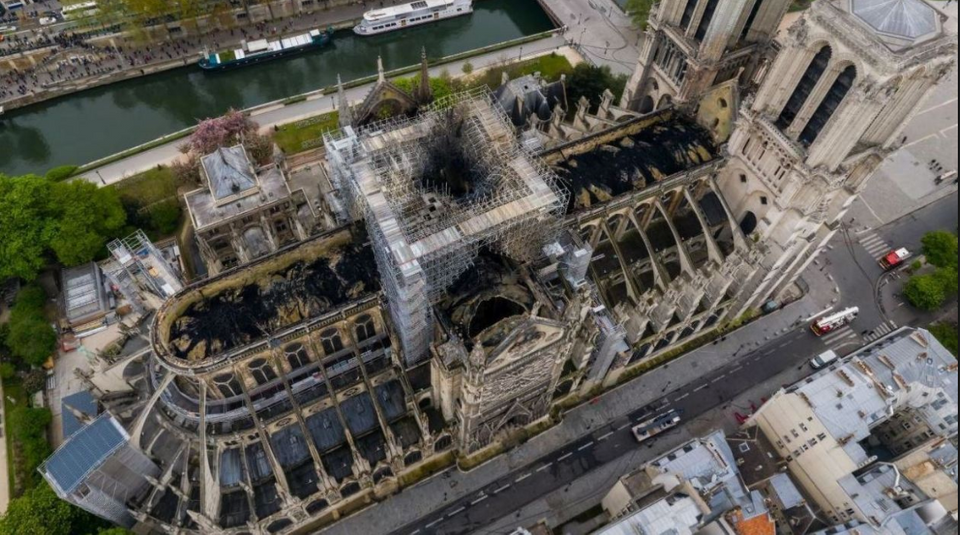 An aerial photo of the damaged vaults of Notre Dame Cathedral

Notre Dame is not stable and urgently needs reinforcing. That is the conclusion of an initial assessment of damage caused by the fire which destroyed its roof and spire on the night of 15 April.

The collapse of a part of the vaults has severely reduced the safety of its structural system, which, in the case of a Gothic cathedral, does not rely on the heavy mass of the walls, as in classical architecture, but on discharging weight through clustered columns, external flying buttresses and counter-supports—a structural “exoskeleton” that until now has been extremely effective and resilient.

Paolo Vannucci, a mechanical engineer at the University of Versailles, has modelled the engineering of the structure and shown that the walls of Notre Dame could collapse under the pressure of wind speeds higher than 90km per hour, while before the fire they could withstand winds of up to 220km per hour, so they urgently need temporary supports. The stability of the vaults is also causing concern because the stone has been weakened by the fire and the weight of tons of water and the molten lead of the roof covering.

Strengthening and restoring the structural system of Notre Dame must, therefore, be the primary goal in the rebuilding process, and it will certainly require more time than initially thought (President Macron announced the cathedral would be restored within five years).

The walls need to be reinforced, and the rib vaults rebuilt and consolidated in order to allow the replacement of the roof, which itself plays an important structural role in the overall frame of the monument.

The flèche (spire) erected by Eugène Viollet-le-Duc in 1860, which collapsed in the fire, was structurally independent of the roof and walls, resting on the pillars of the crossing of nave and transept, but its weight also contributed to the stability of the building. 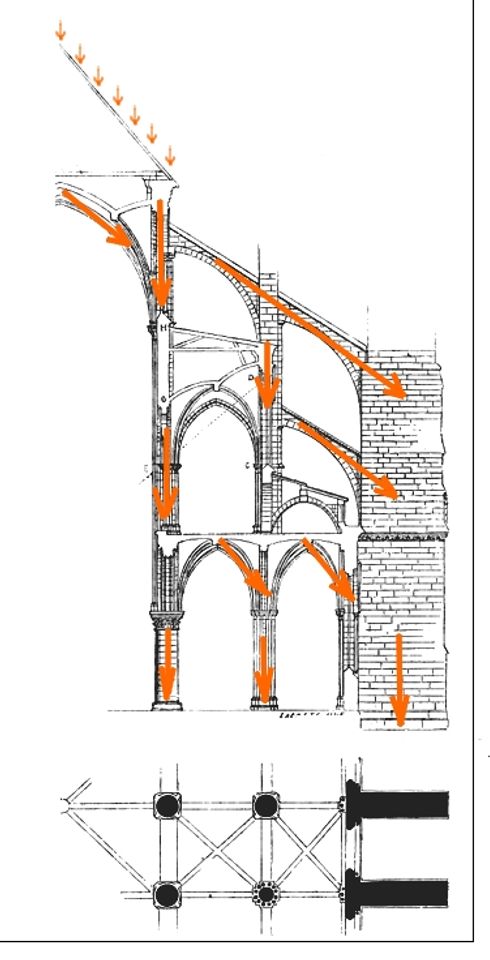 With a Gothic building, the vertical forces are discharged down the walls, while horizontal forces such as wind pressure are discharged through clustered columns, the external flying buttresses and counter-supports.

The different elements of the cathedral thus form a unitary system, but the initial proposals have been for separate restoration of the main structure, the roof, and the damaged or lost decorative elements, and for the rebuilding of the spire. In fact, two days after the fire, President Macron invited architects around the world to propose ideas for a new one, as though it were an element independent of the rest of the building.

Whether the government now launches an architectural competition or decides to rely on the highly professional bodies in charge of French monuments (in particular, the Compagnie des Architects en Chef, to which Philippe Villeneuve, the architect in charge of Notre Dame, belongs), it should demand an integrated project for the entire structure and not allow the design and implementation processes to be fragmented.

Notre Dame has Unesco World Heritage status, and this requires the conservation, restoration and reconstruction principles promoted by the World Heritage Convention, and the International Council on Monuments and Sites (ICOMOS) Charters, to be taken into account. The architectural forms that have been lost should be reinstated, although this definitely does not preclude the use of modern techniques, materials, fire-prevention measures and advanced monitoring technologies.

On 10 May, the Assemblée nationale (parliament) adopted special legislation for the restoration and reconstruction of Notre Dame, which is expected to be passed in the senate on 27 May. This does not address technical issues, but creates a public agency in charge of managing procedures, which have been streamlined.

Francesco Bandarin is an architect and former senior official at Unesco, director of its World Heritage Centre (2000-2010) and assistant director-general for culture (2010-2018).