Contemporary fair has reinvented itself after scaling back and moving to a November slot, although it has lost some big name exhibitors 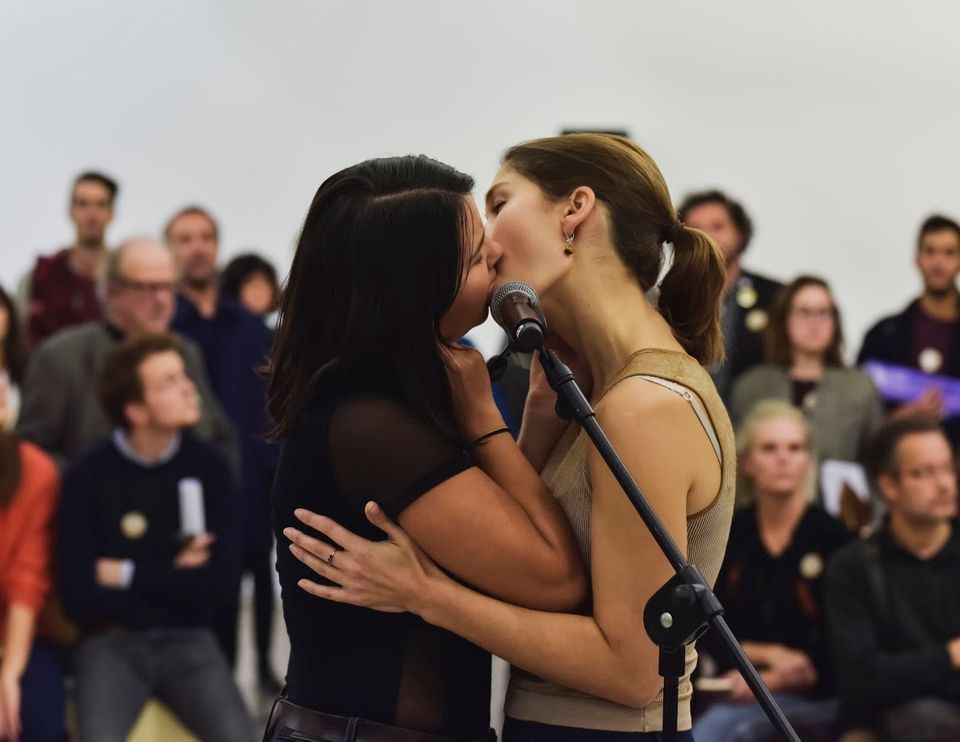 Exactly one year ago, the British artist Oliver Beer had been due to use the interior spaces of the Sydney Opera House as the site for one of his performances, but when a group of activists scaled the building in protest over the treatment of asylum seekers on Manus Island in Papua New Guinea, the famous venue was temporarily sealed off.

“I had my singers but no architecture,” Beer says. “So I asked them if I could use their bodies as the architecture instead.”

The resulting work, titled Composition for Mouths (Songs My Mother Taught Me), saw two people singing into each others’ mouths for several minutes. “The voices create a single mouth cavity, and a new voice appears at that meeting point,” Beer says.

The artist believes he has created an entirely new form of song. “The closest we get is Inuits singing at each other in very close proximity. This is the oldest instrument that we have and its the most natural things to combine in a duet,” he says.

Another version, this time featuring two women, had its European debut with Galerie Thaddaeus Ropac at Independent Brussels last week, part of a bid by the art fair to transform itself into a performance festival. The work comes in an edition of three, priced at £28,000 each. Collectors acquire the hand-written score—not the women—along with all the rights and instructions to enact the piece.

Performances such as Beer’s are more likely to be found at biennials and museums than at a commercial fair—indeed, the artist has a show opening at the Met Breuer in July. For the past two years, Beer has has been combing the Met’s collection for vessels “that are in tune with each other”. He has selected 32 pieces, including a Mesopotamian jug among other ancient objects, which he will animate using microphones and speakers to amplify the ambient tones resonating within them.

However, Elizabeth Dee, the director of Independent Brussels, believes performance can also thrive at fairs, particularly in a city such as Brussels where collectors are known for their commitment and assiduity. “We observed that this is a community that wants to take a deep dive and spend time,” she says. “Collectors feel like they have been on a treadmill, we gave them a chance to change the speed setting.”

Dee adds that the gallery and fair system has traditionally favoured object-based exhibitions, “which is not representative of the entire line of artists’ thinking”. The fair featured ten performances in total, including six that were commissioned specifically for the event by the guest curator Vincent Honoré.

The Belgian offshoot of Independent in New York launched three years ago in the six-storey 1930s Vanderborght building in the historic centre of Brussels. Having occupied an April slot for the past two years—to coincide with Art Brussels—this year Dee decided to switch to November after Art Brussels stipulated that dealers could only exhibit at one or other fair.

“We knew this year we were going to co-exist with a number of fairs in April, including Art Brussels, with whom we were very open to collaboration. There was also a huge amount of overlap with Art Cologne, plus two new fairs in Marseilles and Latin America,” Dee says.

It is not clear whether Art Brussel’s condition extended to the new November slot, but several top flight dealers were notably absent from a marginally slimmer Independent Brussels this year including David Zwirner, Barbara Gladstone and Maureen Paley. Some, such as Almine Rech, chose to participate in the performance section rather than occupying a booth.

Dee believes it is no bad thing to switch up the roster every year–the fair aims for between 30% and 40% rotation every edition. “Independent Brussels offers a different model. We don’t need to see the same galleries at every fair,” she says.