How serious are the dangers of market sponsorship of museum exhibitions? 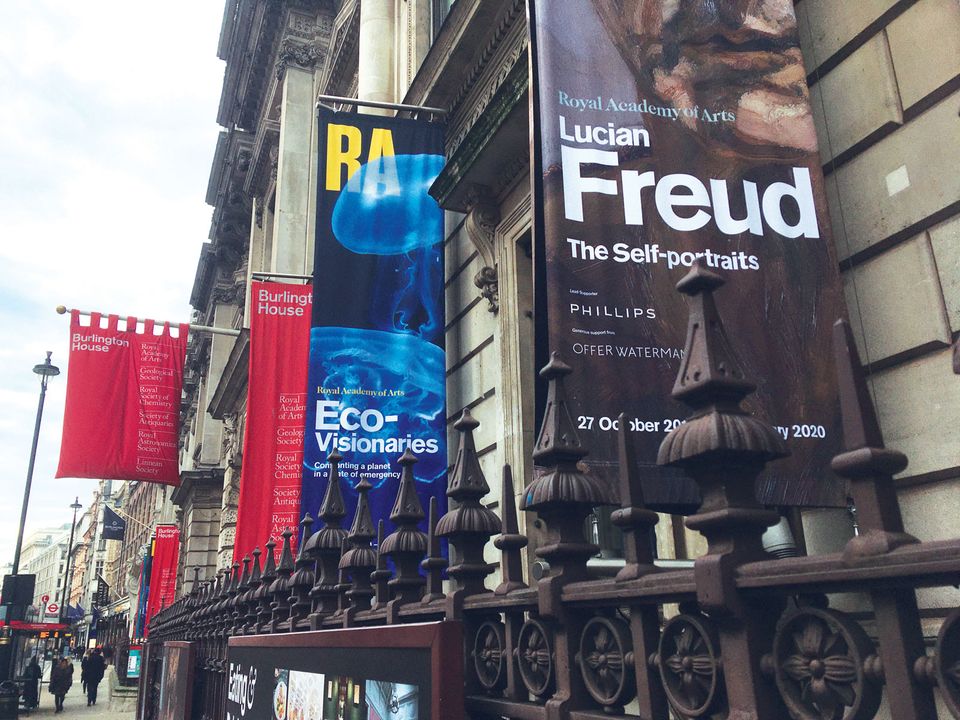 Dealer involvement is not a new phenomenon. In 2010, the late art critic Brian Sewell lambasted the Old Master dealer Charles Beddington for organising (although not sponsoring) a Canaletto show at the National Gallery in London. Sewell suggested dealers “should be consulted when thought to have particular knowledge”, but for the museum “to surrender its exhibition rooms for a dealer to use as he wills” seemed a “wretched and dangerous precedent”.

While a dealer actually organising an exhibition at a public institution is rare, the trade’s sponsorship of UK exhibitions has become more prevalent and, notably, more prominently advertised. The question is: has this raised the stakes in terms of vested interests, as Sewell warned, and are market forces starting to influence museum programming?

Institutions that have benefitted from dealer support deny there is any undue influence. “All shows are pre-programmed curatorially before we go out to the market,” a spokeswoman for London’s Serpentine Galleries says. “We are very strict on any influence by market players.” A spokeswoman for the Tate says commercial partners “are not involved in curatorial decision making”, but, “commercial galleries can join supporters’ circles for exhibitions, which contribute funds towards the project”.

Those in the trade, however, are more open about their roles. Galleries and auction houses often support exhibitions in the planning stages by locating works they have sold to private collectors. The access they provide to particular clients, therefore, is key and can determine what goes on display, or not.

In other instances, galleries are involved much earlier. Most dealers, including the London- and New York-based Per Skarstedt, stress that they do not pitch shows to museums, but, Skarstedt says: “Certain galleries work closely with curators and suggest that those institutions consider mounting an exhibition of an artist. Sometimes there’s a commercial interest in them doing that, therefore they’re motivated to make sure that exhibition takes place.”

The British dealer and collector Ivor Braka, who specialises in selling the work of Lucian Freud and Francis Bacon, describes it as “questionable” if a gallery sponsors an exhibition by an artist they represent, but believes there is no conflict of interest if a dealer pitches an exhibition or is a trustee of a museum. Braka sits on the Serpentine Galleries’s council and has supported exhibitions by David Hockney, among others.

“[Dealers] are often very close to what’s going on and we will come up with really good ideas for an exhibition, which may or may not be someone we work with,” he says. “People are too interested in looking at something potentially being a conflict of interest without actually looking at the ethics of the individuals in question.” After all, museum directors “are usually savvy enough to know”, he adds.

Braka had several works on loan to the recent Bridget Riley show at the Hayward Gallery in London, which was supported by Sotheby’s as well as David Zwirner, Max Hetzler and Sprüth Magers. “I could have loaned the works anonymously, but I wanted to be associated with the Riley show,” Braka says. But he adds: “I don’t think I’ve ever picked up business directly as a result from lending a picture.”

Still, the benefits of sponsoring a show are manifold: institutional visibility, media coverage, an association with covetable artists and potential future business among the biggest perks.

In 2017, Robert Travers, the founder of Piano Nobile gallery in London and a regular supporter of exhibitions, including Paul Nash at Tate Britain in 2016-17, published a series of monographs on the auction prices of several 20th-century British artists.

His research found, unsurprisingly, that there is a direct correlation between museum shows and spikes in interest at auction. “It confirmed in a reasonably analysed way that there is a relationship and, therefore, to support museums is not completely philanthropic—there is a commercial spin off,” Travers says.

So what kinds of sums are involved? None of the public institutions we contacted would disclose exact figures, citing the “commercially sensitive” nature of the information. According to reports, however, top-level corporate sponsors such as banks and private equity firms can expect to contribute north of £500,000 for a blockbuster. Meanwhile, figures published in 2016 revealed that BP gave the Tate £350,000 annually between 2007 and 2011 (the oil giant ceased its sponsorship in 2016).

Individually, few in the trade can match those kinds of sums, but combined, galleries and auction houses can create a lucrative funding pool. Bespoke corporate sponsorship packages (as they apply to galleries) can cost a lot less, but they usually start at around £100,000. Meanwhile, dealers say mid-tier supporters might contribute £50,000 to £100,000 for an exhibition at a national level, whereas as little as £5,000 can go a long way for smaller regional museums.

Auction houses are increasingly topping the bill. Recently, Sotheby’s sponsored the Albert Oehlen show at the Serpentine Gallery, while Phillips was the “lead supporter” of Lucian Freud: the Self-Portraits at the Royal Academy of Arts (RA), which does not receive public funding. The auction house started sponsoring museum shows in 2008 with the Tate Britain Commission for the Duveen Galleries. Since then, Oliver Barker, the chairman of Sotheby’s in Europe, says there has been a drop in support from major financial institutions: “Museums are really struggling, that’s why we step in”.

In a neat closing of the museum-market circle, Barker announced the auction house’s sponsorship of the Serpentine exhibition from the rostrum last June, moments after securing a record for Oehlen’s Self-Portrait with Empty Hands (1998), which sold for £6.2m to Skarstedt. The painting was not loaned for the Serpentine show, although Skarstedt contributed towards shipping and opening night dinner costs, along with fellow dealer Max Hetzler. 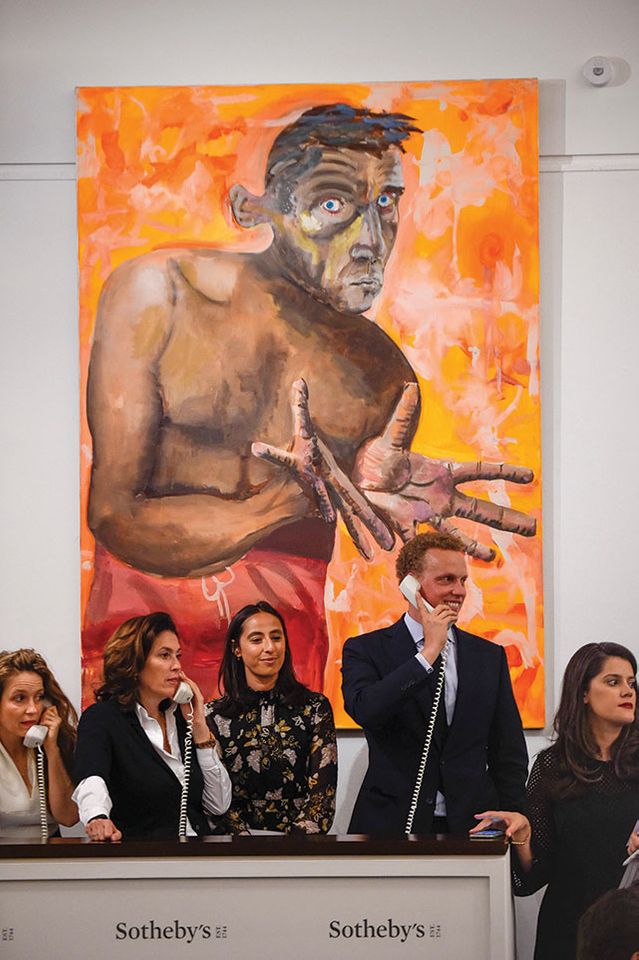 Skarstedt says such donations are usually pegged at around £20,000 to £30,000. Gagosian, meanwhile, provided “special support”, according to the Serpentine spokeswoman, “because they made a major contribution towards the catalogue”. Gagosian, Max Hetzler and Skarstedt galleries all held exhibitions of Oehlen’s work during the autumn in Hong Kong, London and New York, coinciding with the Serpentine show.

Historically seen as competitors, auction houses and dealers are increasingly acting in concert. The London dealer Offer Waterman, who contributed a “considerable sum” to the RA’s Freud show, second only to Phillips, says there was a “rigorous examination” of how it might be perceived for a dealer’s brand to appear alongside that of an auction house. But, he says: “Over the past five years, I have done a lot of work with the auction houses and I don’t see it as one side trying to stifle the other.”

A 20-page contract, which prevents Waterman from discussing figures, ensured his gallery’s logo appeared on the flags outside of the RA and on its London Underground adverts, and secured him advertising in the Financial Times and the RA Magazine. Also, the dealer hosted a dinner for 100 people at the institution (Phillips held a separate event). The effects are already being felt: Waterman says he has been approached by five or six museums about future shows.

An affiliation with an institution can be valuable in other ways, such as early morning access to an exhibition. “That does more for business than almost anything. Clients can afford the dinners and the holidays, but they can’t necessarily get into a museum show before anybody else,” Waterman says. Sotheby’s Preferred membership offers clients similar access, which has “created a real symbiosis”, Barker says. “Museums are just as keen to build meaningful relationships with existing or prospective benefactors as we are to meet owners of art.”

It is not all about the commercial opportunities, though. Many dealers and auction houses cite a desire “to be seen to be giving something back”, as Waterman puts it. Or, as Skarstedt says: “It’s about bringing important shows into being. Our artists like the fact that we support museum shows, but we contribute to exhibitions that we think are important, regardless of whether they are our artists or not.”

Lisson Gallery’s curatorial director Greg Hilty describes its relationship with public institutions as “one of genuine interdependence”. In November, Lisson’s London space is organising a selling show of Marina Abramovic’s work to coincide with her retrospective at the RA (26 September-8 December). It is an “unusual move”, Hilty admits, “because we feel the focus should be on the public presentation, which it still is”. Ultimately, it is a matter of the gallery show “enriching” the RA’s offerings, Hilty says. Lisson has previously supported exhibitions by Ai Weiwei and Anish Kapoor at the RA.

As the rules of the game continue to be redrawn, both the non-profit art world and the trade have come under scrutiny. Some are calling for a more formal code of ethics for the market to abide by, while the Serpentine is among those establishing ethics committees to deal with sponsorship and fundraising, among other things.

Many more are embracing the art world’s burgeoning symbiosis. Cathy Elkies, Phillips’s global managing director, believes “the ecosystem has become more inclusive”. She adds: “Auction houses have longstanding relationships with institutions in the US, but there has been more of a pivot in the UK and Europe.” Barker agrees: “We are becoming more aligned with the US. The barriers are being broken down between church and state—and we are all the better for it.”

about 14 hours ago
'I'm always amazed, in this business, by how seriously some people take themselves': Stephen Friedman on 25 years as an art dealer

about 16 hours ago
Sell the Michelangelo or lose 150 staff? The Royal Academy of Arts’s Covid-19 conundrum