East German area became a space of possibilities, not unlike inner-city New York or east London before they were gentrified 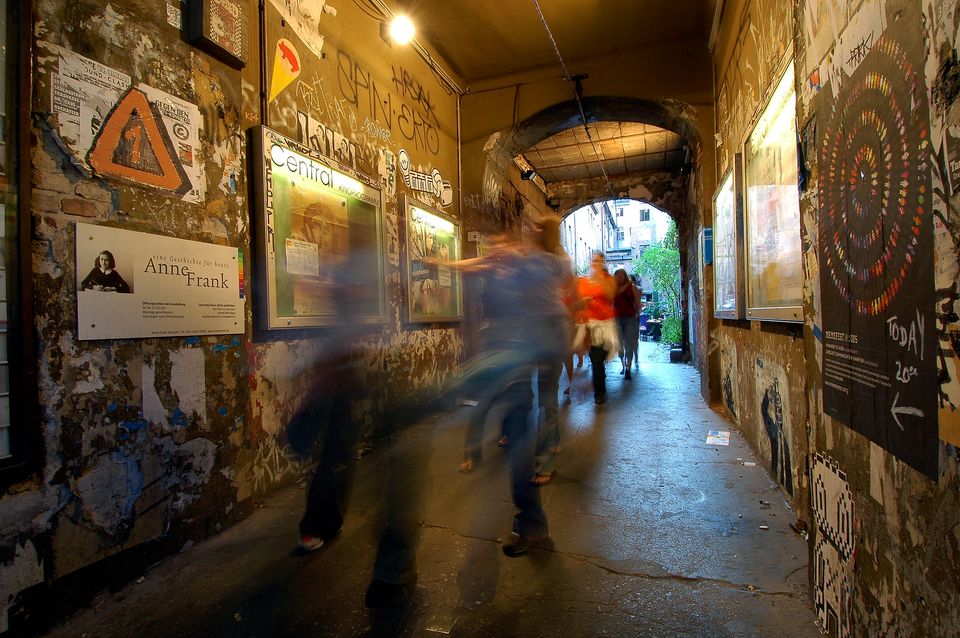 When the Wall fell, Berlin Mitte looked as if the Second World War had just ended. People squatted in empty houses and turned basements into clubs which existed only for a few months. The young and creative enjoyed the freedoms of a place which, for a while, felt like the realisation of what the American countercultural writer Hakim Bey had described as a “temporary autonomous zone”, where at any given moment an excessive party was waiting around the corner.

With an East German government in transition, Mitte in the early 1990s presented itself as a space of possibilities, not unlike the inner city areas of New York before they were gentrified, or east London, which was being transformed in parallel with Mitte.

To ask how the new Berlin art scene emerged in the dark streets and on the neglected brownfields of Mitte nevertheless is a question that somehow misses the point. When people opened galleries at the time, a market for art in Berlin did not exist. Meanwhile, many artists were not focused on the production of commodities because they didn’t need to—life was cheap. One of the first galleries in Mitte was created by Friedrich Loock before the Wall fell. According to legend he was the man who first proposed the idea to squat in the building later known as Tacheles and to do an art show there.

To say that art was part of everyday life in post-Wall Mitte would be a romantic exaggeration of the plain fact that in those days a lot of time and energy went into the creation of artistic situations. A lot of the things produced were mere design items: people would pick up stuff from the streets which had been declared rubbish, reassembling them to create ever more extravagant interiors in which to gather and to party.

Artists like Daniel Pflumm were quite ingenious in combining their art with specific locations and social situations. Pflumm had started to re-create logos of multinational corporations on his computer. He edited them into short video clips which he showed in his former studio on the ground floor of a squat in Mauerstrasse. It led to a small club he called “Elektro”, because that’s what the sign on the storefront read—DJs would spin their records from Thursday to Sunday.

Pflumm’s friends in the “Elektro Music Department” would record soundtracks for his videos, which before long were also on display also in the more conventional white-cube space of Galerie Neu. The art scene in Mitte was inextricably connected with House and Techno music—no opening was complete without a DJ.

Like the clubs of Mitte, some galleries have been forced into nomadic existence by real estate development. One is Allgirls Gallery, founded in 1992 by a group of young women. It was famous for “the sunny side of concept art”, as art critic Harald Fricke put it, which in one show, for example, materialised in pornographic Braille texts by the artist Stefan Thiel. On the other hand, Judy Lybke’s Eigen + Art gallery, which today represents stars like Neo Rauch, still resides in the same building in Auguststrasse where it settled in 1992 after Klaus Biesenbach’s quintessential “37 Rooms” exhibition project. This show took place all over Auguststrasse, reflecting the abundance of usable space.

While Biesenbach became a key figure in putting Berlin back on the map of the international art scene, the powerful Cologne galleries opened branches in Mitte one by one. Only in the late 2000s did the Mitte hype die down—the real estate market had made it an expensive area. The number of galleries in Berlin had multiplied from a few to a few hundred by then and many moved to the former West.

Recently Mitte has seen a small comeback. Galerie Neu, which opened in 1994 in Auguststrasse—one block east of Kunstwerke—returned this spring to the same street, moving into a former heating station. But Tacheles, that great emblem of Mitte’s early dynamism, is unlikely to return to being a venue for art. The building and the huge empty space surrounding it have been sold to an investor. No doubt we’ll see a shopping mall there soon.

• This article was first published in November 2014 under the headline: Right there, right then, all at once