From counting muddles to collective cuddles: the art world's highs and lows of 2018

The people, places and things that had a year to remember—or to forget 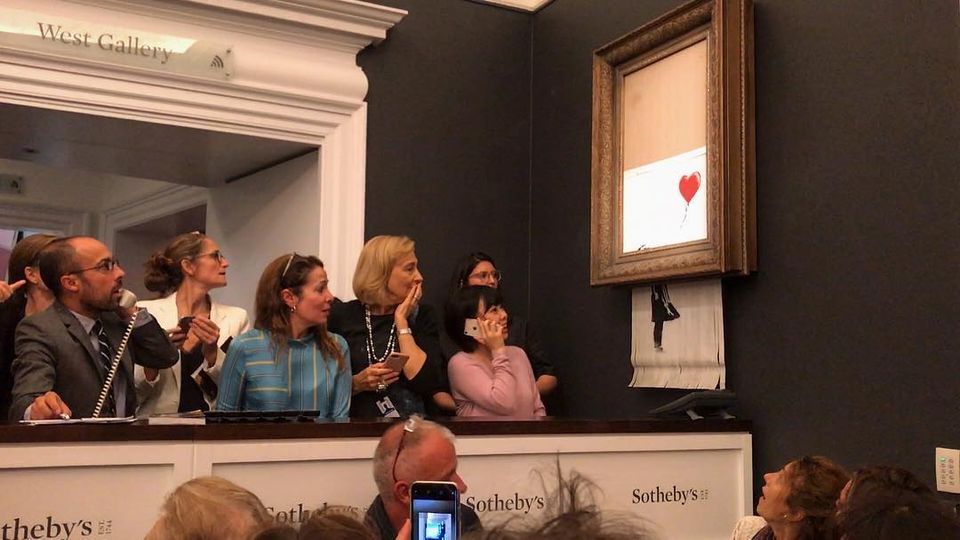 For so long associated with illegal destruction, shredders had an image-overhaul as a creative force this year, when Banksy shredded his painting Girl with Balloon (2006) live at a Sotheby’s auction. Because of an extraordinarily serendipitous failure in Banksy’s mechanism, it stopped halfway and the shredding actually increased the value of Banksy’s work. It no doubt prompted speculator-collectors to ponder whether splicing their zombie formalist paintings might make them worth something again.

The Dutch master has been the subject of several films, but this year’s At Eternity’s Gate was different because an artist, Julian Schnabel, was at the helm (we thank Schnabel for not making a painting of Vincent instead). It was also announced that around ten major shows will be dedicated to the artist over the next two years, including Hockney and Van Gogh at the Van Gogh Museum in Amsterdam in February. Most important of all, he got a dedicated blog, Adventures with Van Gogh, on The Art Newspaper’s website. The art world has, again, gone gaga for Van Gogh.

The ongoing legal feud between Dmitry Rybolovlev and the Swiss art dealer Yves Bouvier, over works of art allegedly sold to the Russian fertiliser magnate with disproportionate mark-ups, must be lucrative for their lawyers—barely a month goes by without them ending up in court. Nice work if you can get it. 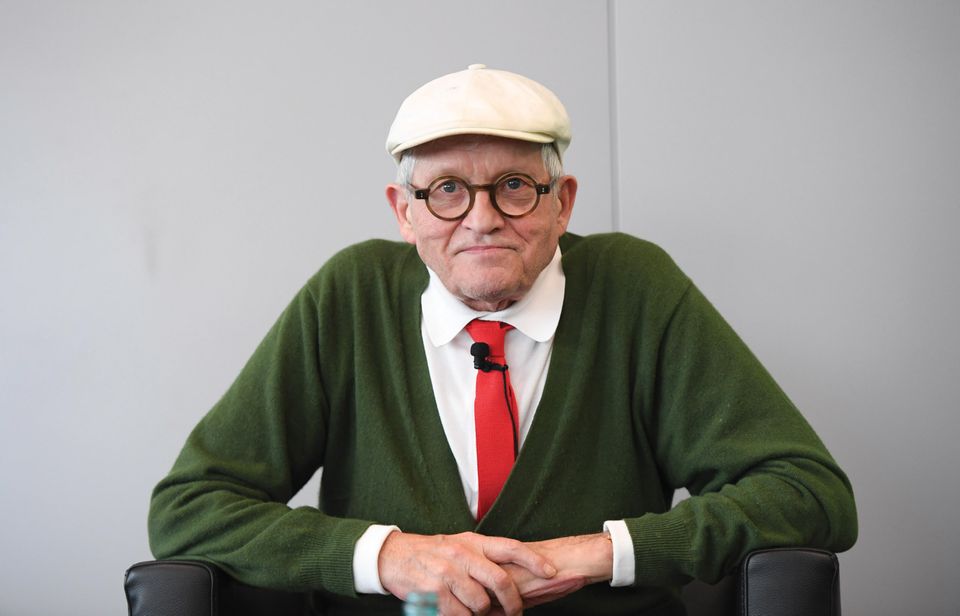 The Yorkshireman broke his own auction record three times this year and is now the most expensive living artist, following the sale of Portrait of an Artist (Pool with Two Figures) for $90.3m with fees at Christie’s in New York in November. Hockney does not give a stuff: he cares far more about his freedom to smoke, his exhibition alongside Van Gogh in Amsterdam in March and then a forthcoming trip to Normandy to capture its abundant spring blossom.

On its 50th anniversary, the collective that shaped the Black Arts Movement, founded in Chicago, is enjoying well-deserved prominence: an AfriCOBRA section is a key moment in the touring show Soul of a Nation, currently at the Brooklyn Museum (until 3 February), they are prominent in the city-wide Art Design Chicago exhibitions and have had numerous commercial gallery shows. A big AfriCOBRA show also opens at the Museum of Contemporary Art North Miami this month.

Not the dance, but the state of being. At Porto’s Museu de Serralves in August, Anish Kapoor’s Descent into Limbo (1992), a 2.5m-deep black hole, gobbled up an unsuspecting visitor who fell in, while in May the top half of Andrea Mantegna’s Descent into Limbo (around 1492) was rediscovered in Bergamo. The Resurrection of Christ (around 1492) arrived in London last week to be reunited with its other half.

The British painter became the most expensive living female artist in October when Propped (1992) sold for £8.25m (£9.5m with fees) at Sotheby’s in London. You could be forgiven for missing the news, however—Banksy’s prank, later in the sale, overshadowed Saville’s achievement. 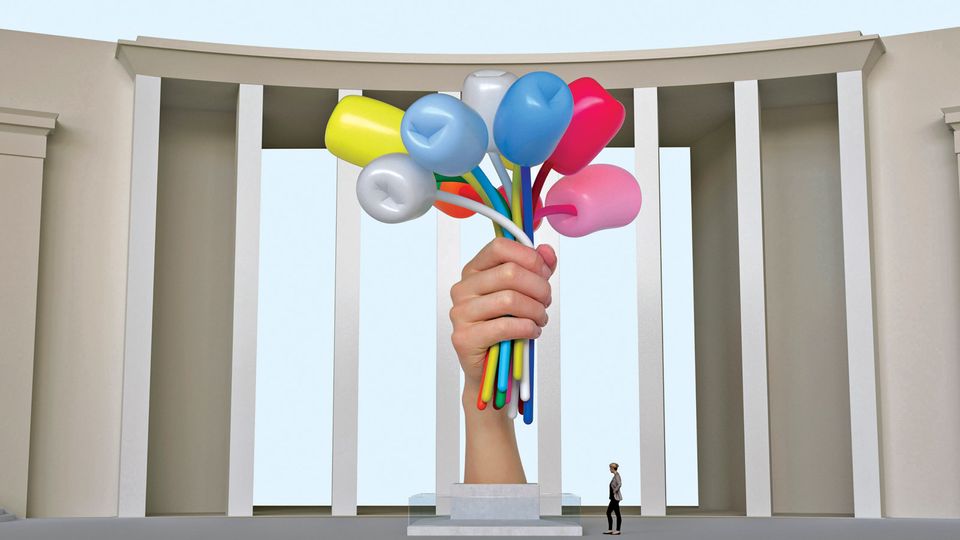 A rendering of Jeff Koons's Bouquet of Tulips © Jeff Koons; courtesy of Noirmontartproduction

Few major museums have not benefited from Sackler family funding. But institutions came under huge pressure to sever ties, not least from the campaigning artist Nan Goldin, after the company Purdue Pharma, associated with the family, was revealed to be profiting from sales of the addictive painkiller Oxycontin, a drug at the heart of the US opioid crisis. Each visit to a Sackler wing, gallery, library, courtyard, education centre—hell, even the journey up a Sackler escalator—now feels somehow sullied.

Early in the year a spate of forgeries and authentication cases damaged the market and in October the bankrupt Dubai company Abraaj was forced to sell its collection, with many pieces traded for much less than were paid for them a decade ago.

The National Portrait Gallery might have graced this column after it seemed its visitor figures had fallen off a cliff—from 1.9 million visitors in 2016/17 to 1.1 million in 2017/18. But after months of tooth-gnashing, we revealed in September that the figures were wrong, the result of serious counting errors by Ipsos Retail Performance’s faulty equipment. The accurate figure was closer to 1.7 million—disappointing, but not catastrophic. But who knows what damage that dunce of a machine caused the gallery?

A second consecutive entry for Koons (see 2017), and for similar reasons: prominent French cultural figures turned their noses up at his proposed 11m-high Bouquet of Tulips and it was rejected from its proposed Paris site outside the Palais de Tokyo (it will be installed on the lawn of the Petit Palais instead). And in November, he was found guilty of plagiarising a 1980s Naf Naf advertising campaign to make his sculpture Fait d’Hiver (1988), a second claim in Paris in as many years. Before the plagiarism verdict, Emmanuelle de Noirmont of Koons’s Parisian representatives Noirmontartproduction spoke often of Koons’s passion for France, hence his desire to say it with flowers. But we wonder if his ardour is waning.

As Brexit and Trump continued to drive deep social divisions, the group Togetherness came up with a plan to protest against how “modern life seems to disconnect us from each other”: a mass spooning session in Tate Modern’s Turbine Hall, aiming to reveal Tania Bruguera’s hidden heat-activated portrait of a Syrian migrant. But it seems not enough Londoners were feeling cuddly: only 100 showed up and the image remained cold and unseen.

Shortly after Leonardo’s painting sold for an eye-popping $450m at auction, it was reportedly swapped for a mega yacht. Its new destination is Abu Dhabi, which promised to display it at its outpost of the Louvre. But the showing continues to be delayed and the work is now allegedly languishing in Swiss storage. Meanwhile, experts continue to debate its history and attribution. Should have kept the yacht?

If you can’t stand the heat, stay out of Frieze New York. That was this year’s message from collectors when a heatwave proved too much for the air-conditioning in the tent and dealers reported working in “sauna-like conditions”. The fair organisers sent out apologies and offered perspiration compensation.

In September, a devastating fire ripped through the National Museum in Rio. But just as reconstruction efforts got under way they were thwarted by the election of “Trump of the Tropics”, Jair Bolsonaro. “It caught fire already. What do you want me to do?,” he said, compassionately.

After publication, we received a statement from a representative of Jillian Sackler noting: "Arthur M. Sackler is not implicated in the opioids controversy or lawsuits; nor are his heirs.”