When the emergency aid runs dry, what next for art galleries?

With short-term assistance varying between countries, trade organisations fear many businesses will close permanently due to coronavirus lockdowns Emergency measures worth billions of dollars from governments in some countries have eased the immediate threat of a wave of insolvencies at galleries as a result of the Covid-19 pandemic. But with economies set to plunge into recession, fairs postponed, and international travel and grand openings out of the question for now, dealers’ associations are pressing for longer term assistance to sustain the art market.

In the UK, for example, the government has offered relief on business rates for retailers, a job retention scheme (furloughing) and VAT deferrals—all of which offer short-term help. But furloughing is so far limited to three months and the business rates relief is just for 2020, says Christopher Battiscombe of the Society of London Art Dealers (SLAD).

“We don’t know how long the lockdown is going to last and we don’t know what the impact is going to be in the longer term,” he says. “These government measures may have to continue for some time. Confidence has taken a big knock. As long as people are worried about the possibility of infection, it’s going to be bad. Trade is at a standstill. Dealers are in desperate straits.” Many SLAD members are campaigning for (and in some cases receiving) rent waivers, reductions or holidays from their landlords—rent invariably being the biggest fixed outgoing for central London galleries.

The instruments and dimensions of short-term state-funded assistance for galleries vary radically from one country to another—among the aid packages on offer in European nations are emergency grants, loan guarantees, wage subsidies, tax holidays and state-sponsored art purchases. But dealers say the current measures won’t go far to counter the long-term effects of the crisis, which has struck at the worst time for the art world—from March to June is usually a whirl of art fairs and openings.

And while some countries—such as France, Germany, Belgium and Switzerland—have been quick to provide emergency relief, others are lagging behind. In Italy, the first European country to be hit by the coronavirus and go into lockdown, dealers are still waiting for help. “We have implemented and accelerated digital strategies,” says Alessia Maiuri, the gallery manager at Mazzoleni in Turin. “Our effort is extremely important, but it’s not enough. Financial support by governments is absolutely necessary for businesses to survive.”

In the US, the Art Dealers Association of America (ADAA) is pushing for rent relief, particularly in New York. “Many states have put in place a moratorium on evictions, but not a full suspension or forgiveness of rent payments, which would make a real difference for galleries,” says Maureen Bray, the executive director of the ADAA.

In March, the ADAA put out a call to action to support Senator Michael Gianaris’s proposed rent relief. “While we continue to advocate for this measure, we’re frustrated by the lack of progress the bill has made in the State Senate and Assembly. New York Governor Andrew Cuomo has not shown interest in and support for the bill,” she says. 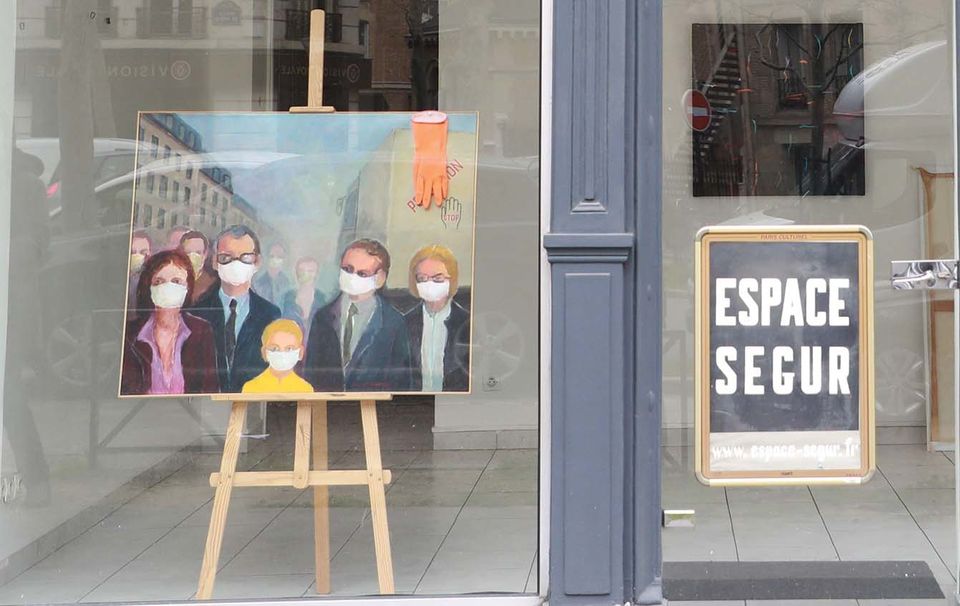 The US’s most useful measure so far has been the loan scheme offered by the Small Business Administration’s Paycheck Protection Program, which will be forgiven if employees are kept on the payroll for eight weeks, Bray says. “We know that members have applied for these loans and we are waiting to see how fast they can be approved,” she says. “But the earliest assessments and accounts from the small business community indicate that this programme is not going to be enough.”

Meanwhile, the Comité Professionnel des Galeries d’Art has warned that a third of French art galleries could be forced to shut this year. That’s despite a raft of government measures including subsidies for employees on reduced hours, a solidarity fund, loan guarantees, and a special programme under which the government acquisition committee will purchase from dealers art worth €600,000 that was meant to have been shown in cancelled exhibitions.

“These measures allow us to survive for days or weeks,” says Marion Papillon, who chairs the dealers’ committee. “But business isn’t going to take off as soon as the lockdown ends. It’s going to take six, 12, maybe 18 months to get going again. We know we are going to have difficulties, and in the meantime we have to keep paying employees.”

The art world will not be the only sector demanding a second round of aid when economic realities start to bite—so it makes sense for trade associations to register their expectations sooner rather than later. Papillon has presented a set of longer term proposals to the government, including more tax advantages for private collectors and companies buying works by living artists, and increased state acquisition budgets for works by contemporary artists. “It’s very important to underline that it’s a question here of an entire ecosystem—it’s not just galleries which are endangered, but also framing businesses, restorers, art historians, fair organisers, specialised lawyers, etcetera,” she says.

Small businesses and freelancers in Germany have benefited from funding from both the federal government and the 16 states. While the federal grants of up to €15,000 for companies with up to 10 employees are welcome support for galleries, they will be used up fast on rent and other business expenses, says Rolf Unkel, a partner at Michael Werner Kunsthandel in Cologne.

Government-guaranteed credit might bridge short-term problems, but in the longer term it won’t help if sales don’t improve quickly as galleries won’t be able to pay it back, Unkel says: “Galleries with few reserves will soon face considerable problems. I know a lot of people who are putting their private money into their businesses in the hope that things will get better.”

The Federal Association of German Galleries and Art Dealers says fine art shipping companies are reporting sales close to zero. It has reiterated a long-standing appeal for a reduction in the rate of VAT paid on art from 19% to its pre-2014 rate of 7% as “indirect, long-term support for galleries.”

In Austria, emergency government aid for small companies was initially limited to €1,000, with an additional €2,000 available from mid-April, “which is a nice gesture, but will not suffice to pay the overhead costs,” says Laura Windhager at Gianni Manhattan in Vienna. Windhager says that a virtual art week in Vienna, called Not Cancelled, “was interesting and surprisingly successful for us” as the first online-only show the gallery has staged. “I honestly do not know what the future will bring,” she says.

Adriaan Raemdonck, the president of the Federation of European Art Galleries Associations based in Antwerp, points out that “most galleries are working even harder than before” to improve their digital offerings and keep in touch with clients and artists.

“It’s very, very hard,” he says. “This pandemic means that we must change mindsets and take advantage of new opportunities—for the simple reason that people need art.”

Appeared in The Art Newspaper, 323 May 2020
More AnalysisTopicsCommercial galleriesFundingcoronavirusEmergency grants