Where does the cruise ship crash leave Venice? 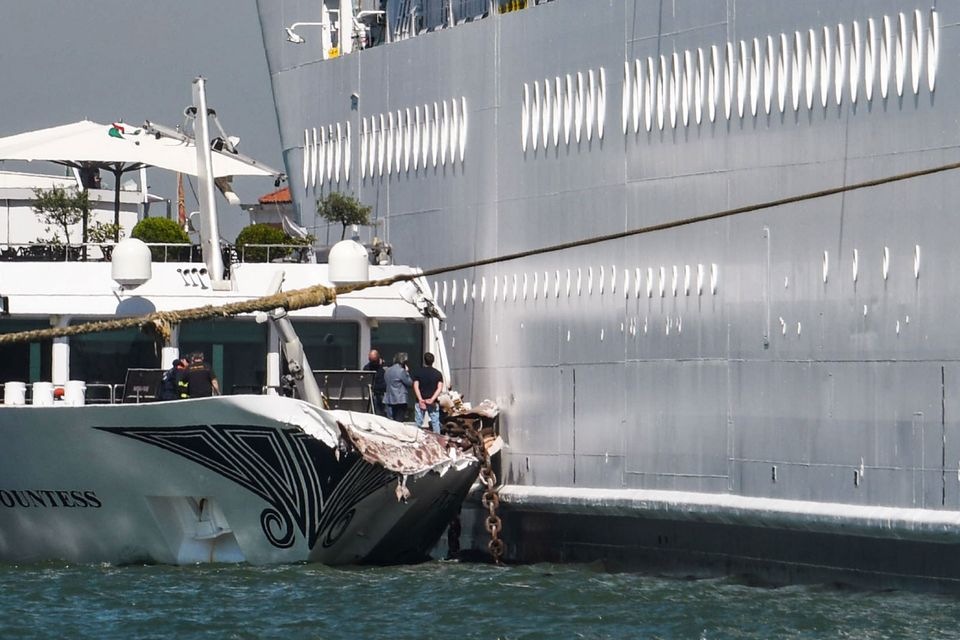 The debate over cruise ships in Venice and the risk that these very large vessels pose to the lagoon city has intensified after a 13-deck liner crashed into a wharf and small cruise ship on 2 June.

The ship MSC Opera, which is 275m long (nearly the length of three football fields) rammed into the San Basilio terminal because communication between the bridge and steering mechanism failed, David Calderani, the president of the association of tugboat operators, told RAI radio. The Gazzettino newspaper reports that the ship began to deviate to the left by the Cipriani restaurant on the Giudecca; this was corrected by the lead tug, but the ship then veered off to the right after the cable linking it to the tug snapped. It rammed the river cruise ship and the quayside, causing four of the smaller ship’s passengers to suffer minor injuries. Videos of the crash posted on social media show people on land fleeing as the ship’s sirens blare.

The vast vessels that brought 1.8 million tourists into the city last year have been a point of contention for many years, but especially since the Costa Concordia run aground on the island of the Giglio eight years ago. Not only are they visually intrusive, the bigger ones as high as the church spires, but research has shown that that they displace huge amounts of water, eroding the ancient and fragile foundations of the buildings, and the engines emit high levels of pollution that are damaging both to the health of the inhabitants and the stonework.

“This is proof of what this traffic can cause. We have been lucky, in a way, because the bank-side of the Stazione Marittima [cruise terminal] is a recent one, it is in cement and therefore strong enough to contain the impact. But the banksides of San Marco, San Giorgio or Punta della Dogana are not. It could have been a disaster,” says Toto Bergamo Rossi, the director of Venetian Heritage, a non-profit organisation that supports conservation and exhibition projects.

Luigi Brugnaro, the mayor of Venice, and Luca Zaia, the president of the Veneto region, both support an alternative route for the cruise ships to enter the port of Venice, which is via the disused Vittorio Emanuele III channel. There is no doubt that this incident reinforces their position. “It is no longer conceivable that big ships sail down the Giudecca canal. We ask for the immediate opening of the Vittorio Emanuele”, tweeted Brugnaro.

In November 2017, the previous government announced a solution to the problem of how to bring cruise ships to the port in Venice without sailing through the city. They would enter through the southernmost opening from the sea into the lagoon and sail down the Malamocco channel. Those above 96,000 tonnes would moor at the industrial port of Marghera on the inside shore of the lagoon, and passengers would be brought into Venice by ferries, 300 at a time. Medium-sized ships (tonnage undefined) would also go down the Malamocco channel, but then turn right down the Vittorio Emanuele III channel to get to the port in Venice.

For this to happen, the Vittorio Emanuele III will need to be dredged from its existing depth of six metres to nine metres, while the Malamocco-Marghera channel will have to be widened to accommodate the 1000 or so extra sailings, because industrial and cruise traffic will be competing for space.

This will be very damaging to the lagoon, accelerating the flushing of sediment from the lagoon bed into the Adriatic sea with every low tide, and eroding the sandbanks and mudflats that reduce the impact of exceptional flooding events.

This is proven by numerous peer-reviewed scientific studies (in particular, Fatti e misfatti di idraulica lagunare: la laguna di Venezia dalla diversione dei fiumi alle nuove opere alle bocche di porto, 2010, by the chair of environmental engineering at Padua university, Luigi D’Alpaos). The damage has been continuous since the Malamocco canal was dug in the 1960s for the passage of petrol tankers and has already made the lagoon more like open sea rather than the shallow, protective buffer around Venice that it used to be.

Environmental scientists, engineers and some politicians have said that a better plan would be to build a floating port outside the lagoon, which would not only avoid damaging the lagoon, but would have a much longer commercial life.

For with the predicted rise in the sea level, the long-awaited mobile barriers being built at the three openings between the sea and the lagoon (now expected to be operational in 2021), will need to be closed more and more frequently and for longer and longer periods, so navigation into the lagoon will be continually interrupted.

This plan for an external port conflicts, however, with the short-term commercial interests of Venezia Terminal Passeggeri, the company that runs the existing port in Venice and has invested in its expansion.

Lidia Fersuoch, the president of Italia Nostra lobby group, said that in the eight years of arguing, an alternative plan to convert this port into a marina for smaller boats could have been developed, but there has been stalemate all round.

The decision on how to proceed now lies with the minister of public works and infrastructure Danilo Toninelli, who told La Stampa newspaper that they had been working for months on a solution that would protect both the tourist trade and ecological necessity, and that a decision would be announced by the end of June.

• For more details on the ecological issues, and on the shareholders in the Venice port, read: This is no way to solve the cruise ship issue in Venice