Spanning 3000 years, the exhibition covers the Egyptian origins of alchemy to its influence on contemporary artists such as Koons 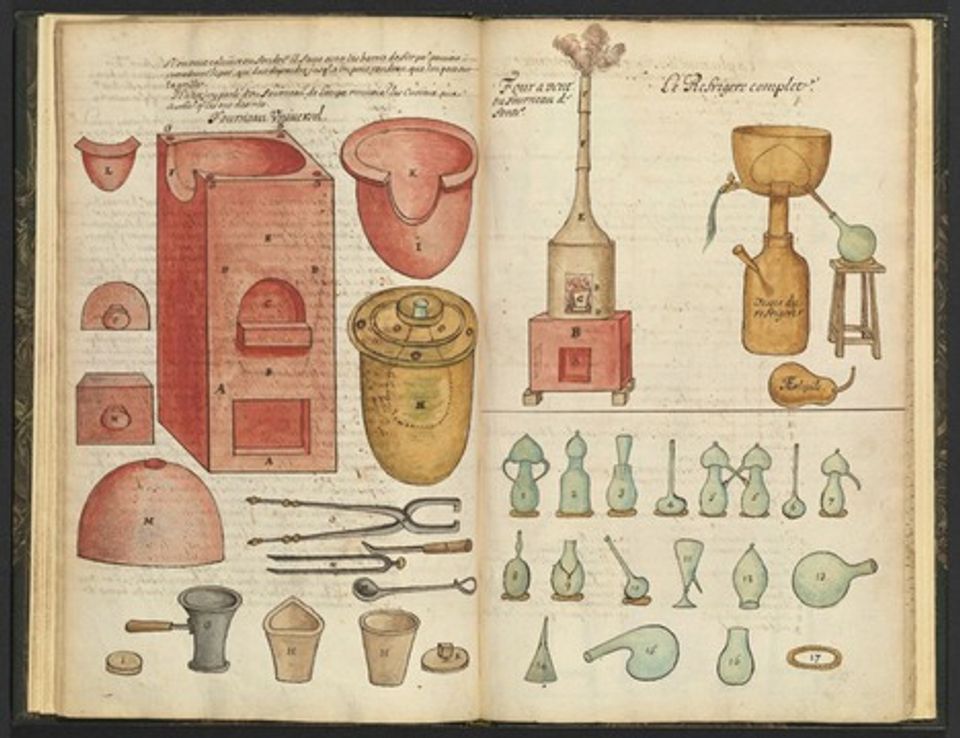 This French manuscript page from around 1770 comes from a handbook for alchemists and includes secret formulas (© The Getty Research Institute, Los Angeles)

What do a blue glass necklace from the third or fourth century excavated in southern Russia and Jeff Koons’s shiny polyurethane resin Dom Pérignon Balloon Venus (2013) have in common, aside from the fact that they are included in an exhibition opening at Berlin’s Kulturforum this month? Both are in the alchemistic tradition of transforming materials, says Jörg Völlnagel, the organiser of the exhibition, titled Alchemy: the Great Art.

Koons is often accused of being superficial, a word Völlnagel interprets literally, in the sense that Koons is obsessed with surfaces. “We are not saying that he is an alchemist,” he says. “But it is the same way of thinking—to create such a perfect surface that it takes an object into another dimension.” Like Koons’s polyurethane resin sculpture, which is made to look like a plastic balloon, the necklace is designed to resemble something it is not. Its intense ultramarine glass beads mimic the semi-precious stone lapis lazuli, which, at the time the jewellery was made, was mined only in remote north-eastern Afghanistan.

The Berlin exhibition explores the relationship between alchemy (known also as the Royal Art) and the visual arts. “Alchemy is a creation myth and is closely related to art,” Völlnagel says. “It is about transforming material. It is the art of creating something with the help of technology and science that is not otherwise readily available.”

For centuries, alchemy fell into disrepute and was seen narrowly and erroneously as the preserve of charlatans and foolish dreamers obsessed with producing gold in a laboratory. Although it has long since been superseded by modern, scientific chemistry, it survives in contemporary culture and is currently undergoing a revival in recognition of its historical importance.

The Berlin show (organised in co-operation with the Getty Research Institute in Los Angeles) spans 3,000 years, 800 sq. m of exhibition space and 200 exhibits. It covers the origins of alchemy in Egypt 2,000 years ago and its later development in the West, which dates to the 12th century with the translation of Arabic texts related to the craft. The show also encompasses alchemistic traditions that arose elsewhere, particularly in China and India.

Chinese pharmaceutical practices, ancient glass and porcelain, early periodic tables, as well as the work of contemporary artists including Koons, Carl Andre and Anselm Kiefer, all figure in the exhibition. It is divided into ten chapters on subjects such as the relationship between gods and metals, the philosophers’ stone (supposed to transform cheap materials into gold) and the chymical wedding, an alchemistic principle based on the idea that conflicting energies combine to create a whole. About two-thirds of the items are from the city’s museum collections and the collaboration with the Getty has taken place on a conceptual level, rather than in an extensive exchange of objects.

For Völlnagel, the head of research, exhibitions and projects at Berlin’s State Museums, the exhibition is the fulfilment of a long-held dream. He completed his PhD on alchemy in art in 2001 and published a book in 2012. “The subject has kept a hold over me ever since,” he says.