Are these acts a citizens’ protest against the situation in which the country now finds itself, or are they merely vandalism? 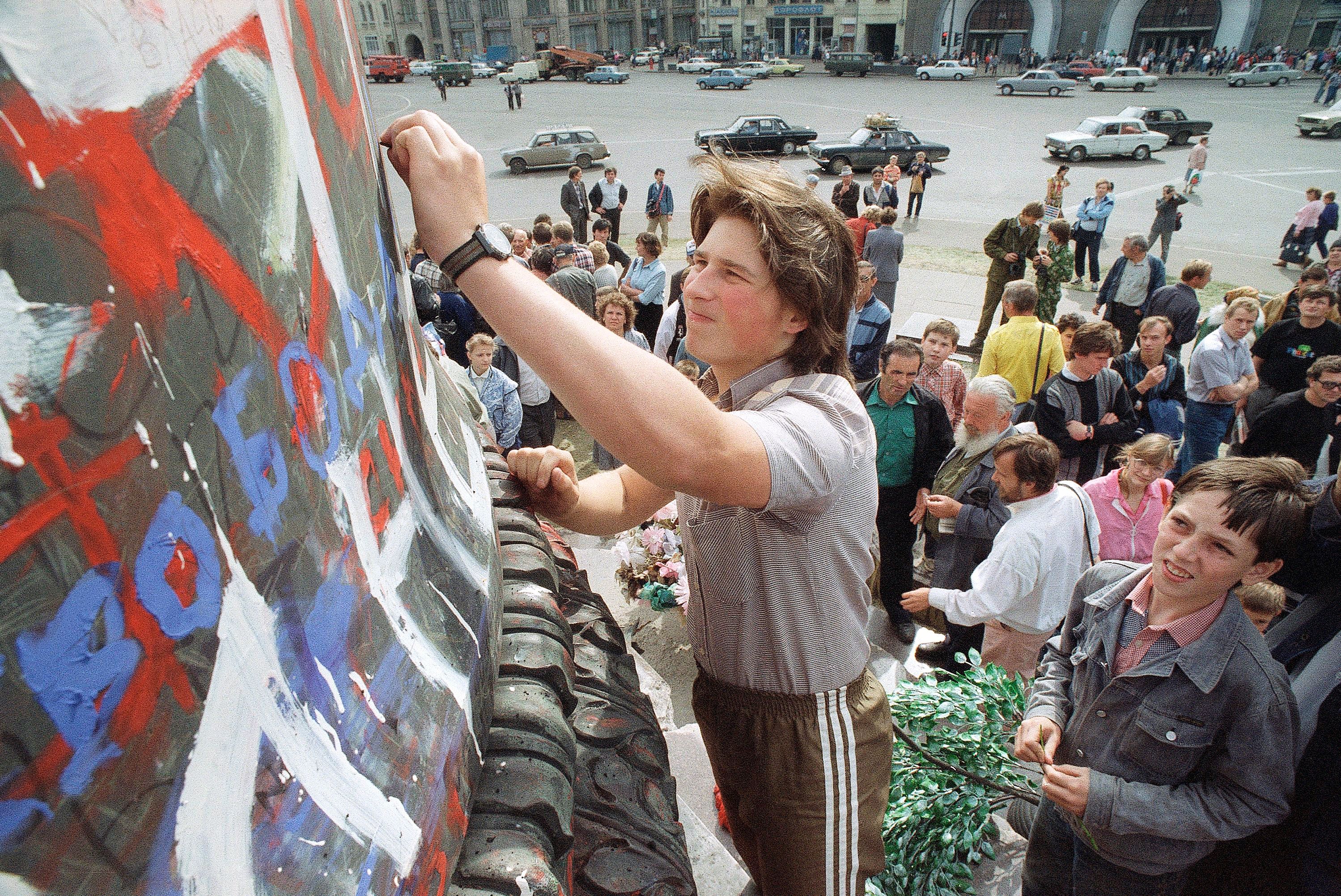 Muscovites writes anti-KGB slogans on the base of the statue of Felix Dzerzhinsky founder of KGB, in Moscow AP Photo/Czazek Sokolowski

For some months now, the political media have been reporting that monuments erected to one public figure or another have been wrecked or torn down. But how do matters stand from the cultural point of view? Are these acts a citizens’ protest against the situation in which our country now finds itself, or are they merely vandalism?

In the view of some commentators, they represent a lack of culture. One piece of evidence advanced as an argument is that no one is removing the Robespierre monument in Paris. The opponents of this view say: “That is perfectly true. And no one is going to take it away, the simple reason being that there is only one monument to Robespierre in Paris, and it may be the only one in all France.”

But as for the Soviet Union, someone counted 144 monuments to Lenin in Leningrad alone. There is no town or settlement in the country where there is not a monument to Lenin, and it is usually, quite frankly, a bad piece of work. Not many people were satisfied with the Presidential decree entitled “Putting a Stop to the Outrages Committed Against the Monuments Associated with the History of our State and its Symbols” (13 October). The Parliamentary Cultural Commission is still discussing the draft of a document related to this problem. This draft lays down a penalty of either two to three years’ imprisonment or a fine of up to 1,000 roubles.

The sculptors and artists who created the works that have suffered are indignant at this excessively mild punishment. They reckon that any extremist would be prepared to lay out 10,000 roubles to be able to daub paint on some hated figure’s monument. One has to accept that such acts should be subject to penalties when reasoning is no longer possible.

For the time being, this matter is being decided more quickly in those Eastern European countries to which the USSR President’s Decrees do not apply. For example, the Polish authorities have proposed that the monument to the Soviet Marshal Ivan Konev should be handed over to the Soviets. Konev took part in the liberation of Krakov during the Second World War.

• Originally appeared in The Art Newspaper with the headline "Iconoclast controversy"

In August 1991, after a failed coup d’état of the Soviet government, a crowd in Moscow pulled down a giant statue of the KGB founder Felix Dzerzhinsky. “Iron Felix” was dumped in a park with other monuments near a branch of the State Tretyakov Gallery. Over the next few decades, Russia threw itself headlong into capitalism, yet thousands of Soviet monuments remained in place, with founder Vladimir Lenin still standing across the nation.

In recent years, the country has experienced a rush of monuments mania, with many new statues commissioned, including of controversial figures like Dzerzhinsky and Josef Stalin, as well as tsars and saints, from Ivan the Terrible to Nicholas II. In 2016, in the midst of escalating conflicts over the annexation of Crimea in Ukraine, President Vladimir Putin unveiled a monument to the tenth-century ruler Vladimir the Great outside the Kremlin, and called for Russians “to stand together against contemporary challenges and threats”.

The Marshal Konev statue described opposite was returned by Poland to Russia in 1991 but the countries have been sniping over the destruction of other Soviet monuments. Similarly, the dismantling of a Konev statue in Prague in April soured Russian-Czech relations. --Sophia Kishkovsky, Russian correspondent, The Art Newspaper

Appeared in The Art Newspaper Archive, 3 December 1990
More ArchiveTopicsSoviet UnionMonumentsMonuments and their histories