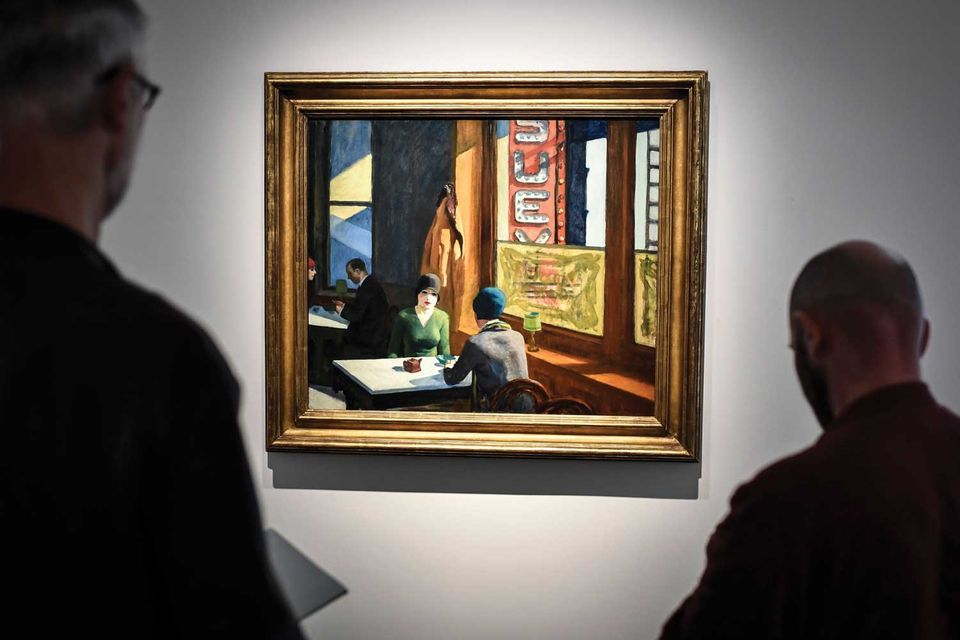 The Seattle Art Museum has received more than 1,000 works of art from 53 donors as part of an acquisition campaign to celebrate its 75th anniversary next year. The donations represent one of the largest gifts to a museum in the history of US philanthropy.

They have come from the region’s top private collections, including those of 23 museum trustees such as Virginia and Bagley Wright, Jon and Mary Shirley, Barney A. Ebsworth and Susan and Jeffrey Brotman—all of which focus primarily on modern and contemporary American and European art.

Marc Porter, president of Christie’s Americas, says the gifts are “certainly worth more than $1bn. This is an incredibly devoted group of collectors who have been assembling the finest works in their fields for decades. They are collections you simply can’t put together anymore.”

Highlights of the gifts include a brass version of Brancusi’s Bird in Space, 1926, Edward Hopper’s Chop Suey, 1929, a German-period Marsden Hartley, 1914-15, and significant works by virtually all the major Abstract Expressionists and post-war American artists. There is also a broad range of international ­contemporary artists and photographers, many of whom are represented in depth.

The donations have been announced as the museum prepares to open a suite of ­galleries in a new building by Brad Cloepfil of the Portland, Oregon-based firm Allied Works on 5 May just three months after opening its waterfront Olympic Sculpture Park.

“We built the Sculpture Park and the expansion to catch the local collections and make sure they stay in town,” explains director Mimi Gardner Gates, who is Microsoft co-founder Bill Gates’s stepmother. “Suddenly the Seattle Art Museum is a major art institution,” she says. “It’s no longer space-constrained, circulation is easier, and we have received these major gifts.”

The gifts to the Seattle Art Museum (SAM) have their precedents. The Annenberg collection of Impressionist and Modern art bequeathed to the Metropolitan Museum in New York in 2002 was valued at around $1bn and Paul Mellon’s gifts to the Yale Centre for British Art in New Haven in the 1980s have since been valued in that range.

Successful acquisitions campaigns by US museums include the National Gallery of Art’s 50th anniversary drive in 1991. Led by J. Carter Brown, the initiative resulted in the donation of more than 2,000 works of art whose cumulative value, though not officially appraised, was in the hundreds of millions of dollars.

In 2002, the trustees of the Whitney Museum gave the institution dozens of valuable modern American works, most of them from chairman Leonard Lauder. And more recently, three couples have promised the Dallas Museum of Art their entire ­collections of modern and contemporary art, including future acquisitions. The museum valued the gift at around $400m. The Seattle campaign, though far less publicised, rivals or surpasses all of these donations.

When first considering ways to mark the 75th anniversary, the SAM board considered a less ambitious undertaking. “We were thinking how busy everyone was with the expansion campaign, so we thought about trying to encourage the donation of a mere 75 new works for the anniversary,” recalls Chiyo Ishikawa, the museum’s deputy director for art. “We quickly abandoned that and decided that to do something piecemeal would be a mistake. The board leadership gave us the encouragement to go for more, and they all set examples.”

“Dallas was very much a model for what we’re doing,” says museum president Susan Brotman, noting that the board invited Dallas Museum director Jack Lane to give “a pep talk to spur things on”. But the vision and inspiration for the Seattle campaign came first from trustee Virginia Wright. “We were encouraged by Virginia to think of ourselves as a community of collectors and to think of our individual collecting in relation to what others were collecting, and with an eye toward giving things to the museum,” says Ms Brotman.

However, the windfall would not have occurred without the building expansion, she adds. “Many people said if the museum had space they would like their collection to go there,” says Ms Brotman, “and as we got the building going and looked towards the 75th anniversary, there have been conversations with collectors about actually making those promises.”

The museum’s new galleries are in a 16-storey glass-and-steel tower built in an unusual joint venture with Washington Mutual Bank (whose headquarters is next door) which owns the top four storeys and rents another eight from the museum. The museum has raised $200m to pay for the new galleries, the sculpture park and related costs, but fundraising needs will increase with the new building; Ms Gates says the annual budget will grow from $17m to around $22m in the coming year.

The first four floors of the new tower connect on three levels with SAM’s existing building by Robert Venturi, which opened in 1991. The new spaces, interlinked by escalators, are dedicated to modern and contemporary art, beginning in the lobby with Cai Guo-Qiang’s installation of nine suspended automobiles careering through space, and continuing upstairs in a double-height gallery that features a giant black rat by Katarina Fritsch and Do Ho Suh’s 2001 suit of Korean armour composed of 100,000 army dog tags, first shown at the Venice Biennale.

About 125 of the newly donated works have been integrated in the permanent collection, and another 100 are in a special exhibition on the fourth floor.

The museum’s new Olympic Sculpture Park, designed by Weiss/Manfredi of New York, has attracted more than 200,000 visitors in its first three months. The sculptures donated as part of the 75th anniversary campaign include Richard Serra’s five-part steel piece Wake, a steel tree by Roxy Paine, several works by Tony Smith donated by the estate, a moss and fern-covered hemlock log house and a ­“vivarium” designed by Mark Dion. A Claes Oldenburg typewriter eraser—on loan from Microsoft billionaire Paul Allen—is positioned as if it is rolling down a hill. Neither Mr Allen nor his fellow Microsoft billionaire Bill Gates have donated works of art to the campaign, but the Bill and Melinda Gates Foundation has given $25m.

Virginia and Bagley Wright—The granddaughter of timber barons, and daughter of an art philanthropist, she has been a trustee of SAM since 1959 and with her husband served as honorary chairs of the building campaign. They began collecting half a century ago and assembled the region’s largest modern and contemporary collection, with major works by Rothko, Newman, Frankenthaler, Judd, Andre, Chamberlain and Rauschenberg (his 1960 Octave), as well as Ruscha, Kelly, Salle, Kiki Smith, Hammons, Currin, and now Europeans Polke, Richter, Kiefer and Cattelan, among others. Their collection has long been promised to SAM, where it was shown in 1999, but their 200-work gift was only recently made official.

Jon and Mary Shirley—Retired former Microsoft president and chief operating officer 1983-90, he is now chairman of SAM. The international modern and contemporary collection they donated includes Brancusi’s Bird in Space (formerly in the New York collection of Hester Diamond, another donor to the SAM campaign); Giacometti’s The Dog, the museum’s first work by the artist; and an orange on red Rothko from 1956. They also have a drip painting on paper by Pollock, works by Kline and Jasper Johns, and strong collections of Close and early Calder. They helped purchase Calder’s Eagle (1971) for the Olympic Sculpture Park and ­created a fund for the park’s maintenance.

Barney A. Ebsworth—A retired travel executive, after a divorce he moved from St Louis to Seattle bringing with him the word’s finest collection of American Modernism from 1913-45, including Edward Hopper’s Chop Suey (1929), Georgia O’Keeffe’s Music-Pink and Blue No.1 (1918), Marsden Hartley’s Painting Number 49, Berlin (1914-15), and works by Sheeler, Joseph Stella and others. In the late 1980s he reached into the postwar period including Gorky, Pollock, de Kooning and Rauschenberg. He donated 65 works to SAM, though his collection was believed destined to the National Gallery of Art, where it was exhibited in 2000 and where he was a trustee and co-chair of the collectors committee.

Susan and Jeffrey Brotman—He is a founder and chairman of Costco Wholesale, she is president of the SAM board of trustees. Since the mid 1990s they have built an international contemporary collection with works by Serra, Puryear, Ruscha, Hodgkin, late de Kooning and a concentration of German artists including Kiefer, Polke, Richter, Baselitz, and Gursky. Their gift includes Ruscha’s 1964 painting Damage and Lee Krasner’s 1956 Easter Lilies.

Not all of the gifts promised to the Seattle Art Museum materialised. Most notably, after Barney A. Ebsworth’s death in 2018, his family chose to sell Edward Hopper’s Chop Suey at Christie’s rather than give it to the museum: the iconic painting brought $91.8m including fees, shattering the previous auction record for the artist. And despite the munificence of the $1bn-plus in art gifts, the museum has since had its hiccups, like a budget shortfall after the loss of Washington Mutual as a co-tenant of its building, after the bank collapsed during the 2008 recession. Currently, of course, the institution is closed because of the pandemic, but it has been able to preserve its 271 staff jobs through June by cutting executive pay and securing a $2.8m loan via the federal Payroll Protection Program. — Nancy Kenney, Senior editor, museums and heritage