As US museums face mounting legal issues, an annual conference explores what to do with whistleblowers and dodgy donors 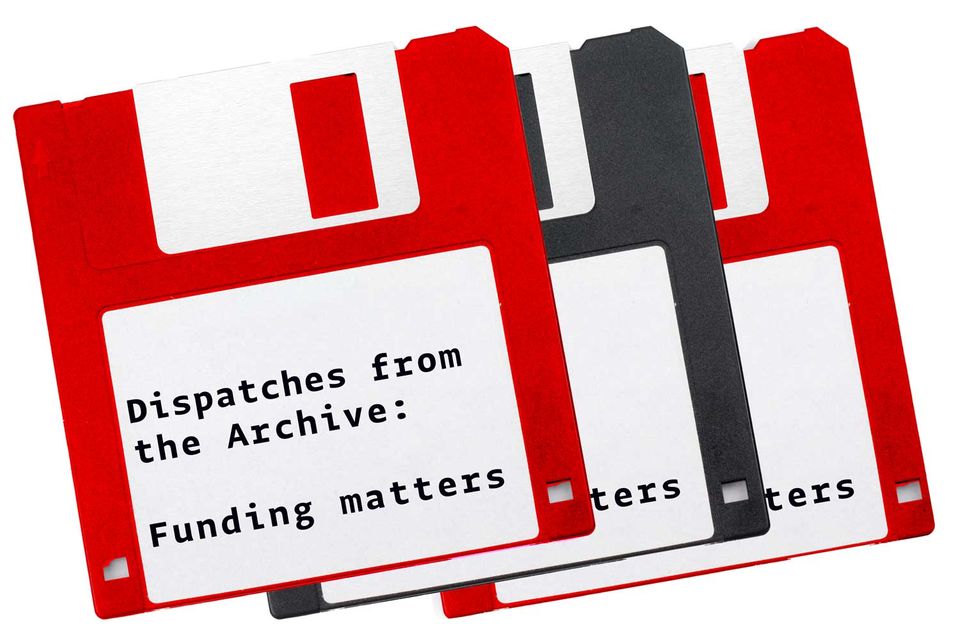 Dispatches from the archive: Funding matters

Over 290 museum professionals met in Chicago for the annual three-day conference on legal issues in museum administration offered by the American Law Institute-American Bar Association (ALI-ABA). Reflecting continued concern that charities should be examining their ethics policies in the wake of America’s recent corporate scandals, the lectures focused on conflicts of interest, and legal and ethical issues that arise when museums deal with trustees, for-profit entities, lenders and donors.

But consistent with its 34-year mission to teach the law to museums that can’t afford an in-house lawyer, the conference also discussed the nuts-and-bolts law of tax audits, contracts, dealings with employees and volunteers, copyright and artists’ rights.

The conference is co-sponsored each year by the Smithsonian Institution, with the cooperation of the American Association of Museums.

In dealings with donors, says Teri J. Edelstein, of the museum consulting firm Teri J. Edelstein Associates in Chicago, a written museum policy on sponsorships and donations, established beforehand, “helps you address problems in a non-confrontational manner”—for example, if the museum has decided not to take money from alcohol or cigarette manufacturers for children’s programming.

“Be prepared to walk away” from gifts that aren’t squeaky-clean, such as gifts which the donor believes entitle him to questionable tax deductions, Ms Edelstein advises. “Slow down.” Stick to the written policy, and be aware that donors may need to be educated. If a donor wants to establish an acquisitions fund, but insists that he will be the one to decide what art will be bought, a friendly discussion, bolstered by the museum’s written policy, may turn the situation around once the donor understands that purchases must be approved by the board and acquisitions committee.

Those who act for a museum are under a duty to “act prudently with the degree of care of a reasonable person”, says John P. Sare, a partner at the law firm Patterson Belknap Webb & Tyler, LLP, New York. Trustees should “look a gift horse in the mouth,” by staying informed and asking difficult questions.

For example, a donor’s offer to give the museum a “great warehouse” for the museum to sell may sound lucrative—but once the museum becomes part of the chain of owners of the real estate, it acquires potential environmental tort liability if the warehouse is hiding a chemical spill. As another example, a successful investor may offer to give funds on the condition that he alone will tell the museum how to invest the money. But this would be a permanent delegation of a function belonging to the board of trustees, for which the board remains responsible, and “should be strenuously resisted,” says Mr Sare.

The Smithsonian Institution (SI) has survived an income tax audit by the IRS, with flying colours. The tax examiners focused on the question of whether the objects in the museum gift shops were adequately related to SI collections.

It was clear where this audit was headed. If a museum earns income from activities that are “substantially related” to its charitable purpose, the museum owes no income tax on the income. But if a charity earns income from “unrelated” activities, the income is subject to “unrelated business income tax”, or UBIT. The IRS regularly seeks out charities that avoid paying UBIT.

The Smithsonian audit was a “five year marathon”, says Marsha S. Shaines, SI Deputy General Counsel. The IRS assigned a revenue agent and a specialist in charitable organisation merchandising to the case, and asked for voluminous financial documents and all of SI’s mail order catalogues. The SI had to prove “the relation of each and every item, of hundreds of items of merchandise, to our collections. The IRS agents declined offers from staff to walk through the shop. They walked through themselves,” Ms Shaines said.

Fortunately for SI, that is precisely what Ms Shaines and another SI attorney do each year anyway. The IRS asked SI attorneys for enormous detail, including the “provenance” cards which describe the item’s relation to museum objects. “Fortunately, we had hundreds of documents to give them,” says Ms Shaines. “We were successful beyond our dreams”. The IRS “accepted all of our items” as being related to the museum’s mission, apart from tourist souvenirs of Washington, DC.

But the dutiful SI had already paid the UBIT on sales of those items anyway. The lessons? Display provenance tags with merchandise, use a procedure to ensure that items are related to the museum mission, and if you sell unrelated items that generate UBIT, “bite the bullet and pay the tax voluntarily.”

Why whistleblowers are good

If you’re a non-profit organisation, you don’t need a whistleblower policy. So why should a museum have one? “So you can find out what’s going wrong and fix it,” says Julie E. Getzels, General Counsel of the Art Institute of Chicago. Studies show that 40% of wrongdoings, such as internal fraud or expense account falsifications, are uncovered through inside tips.

Under US law, if the wrongdoing involves misappropriation of government funds, individuals may be motivated to sue because they are allowed to recover a percentage of any judgment or settlement, a situation museums will want to avoid, says Ms Getzels.

“You want to develop a culture and habit” in which people bring bad information to management first, she says. Further, she says, it’s a “best practice” for a museum to have a policy providing a safe communication channel to report wrongdoings. “These policies can promote the public’s confidence in your institution. And trustees have come to expect whistleblower policies.”

If you don’t want employment complaints to flood the whistleblower hot line, “state that these issues should go to the human resources department.” Identify a central management person to receive complaints, and set up an alternative, such as the head of the audit committee, in case the particular person you name is himself the target of the complaint or is too intimidating.

Also, “make it easy” for the whistleblower, Ms Getzels says, without requiring complicated steps such as getting a password on the internal e-mail system. Many whistleblower policies reach out beyond employees, to vendors and others “to broaden the net” that will identify problems. How to publicise the desire to hear complaints? Use the employee manual, staff bulletin boards, and packets given to third parties dealing with the museum.

Trustees and the art market

Trustees owe a duty of loyalty to the museum, and a conflict of interest arises if the trustee engages in a transaction between himself and the museum. As an example, a “corporate opportunity”, in the museum context, is a business opportunity that belongs to the museum—and which a member of the governing board should not use for his personal benefit. Suppose information is disclosed at a board meeting that certain art, which the museum wants to buy, is for sale. Can a trustee sitting on the board use the information for his own benefit to buy the art himself?

The answer is no, says Professor Evelyn Brody, of Chicago-Kent College of Law, Chicago. To do so would be an inappropriate use of the corporate opportunity which the museum has gained, contrary to the trustee’s duty of loyalty to the museum. The same would hold true if the trustee learns of the information as a member of the acquisitions committee. What if the trustee is at a cocktail party and someone tells him about the art, only in his capacity as an individual who collects art, not as an officer of the museum? Some states say the conflict does not arise because the individual is acting individually. Other states would say that because of the person’s status as a museum trustee, he should not go out and buy the art.

Can a dealer be on the board of a collecting museum? It happens. But “a myriad of conflicts may come up, as both the dealer and the museum are in the market for collecting art,” says Ms Getzels. In some cases, dealers have been life trustees without a vote, which gives the board the dealers’ expertise without giving them decision-making authority for the museum. Or, a dealer who is a trustee may be excluded from board decisions about acquisitions from the dealer’s gallery.

Responsibilities of the board

In terms of the duty of care, the two major responsibilities of a board of directors are hiring the principal officers, and overseeing the financial management of the museum, says Jack B. Siegel, of Charity Governance Consulting LLC, Chicago. When the Milwaukee Public Museum (MPM), not the Milwaukee Art Museum, went through a major financial crisis in recent years, some members of the board, Mr Siegel says, apparently were not paying enough attention. In 1992, the museum, formerly owned by the county, became a private non-profit institution. Following news reports of operating losses, in May 2005 the museum’s president stated that the museum had suffered a $2.4m dollar operating loss for 2004, and that net assets had declined by $4.1m.

Mr Siegel examined the numbers, after he reconstructed the museum’s financial statements from its publicly available tax forms. The story involves “absolutely no personal gain on anyone’s part”, Mr Siegel emphasises. But in 2001, for example, “the museum missed terribly on the retail operations,” for unknown reasons. In 2002 through 2004, the “misses” in expected retail income got bigger. If officers are providing “lousy budget figures”, Mr Siegel says, a board of directors can ask for better numbers.

A board “ultimately can fire the chief financial officer if you’re not getting the information you want”. Directors, he says, should be examining budget and financial statements over time, with the help of audit and finance committees, and asking pointed questions, such as “What are our average monthly expenses? How many months can we cover if we don’t have a nickel of revenue coming in?” The MPM board had 27 members. “Boards with more than 15 members lack focus,” Mr Siegel says.

• Originally appeared in The Art Newspaper with the headline "What to do with whistleblowers and dodgy donors?"