Women doing it for (and to) themselves 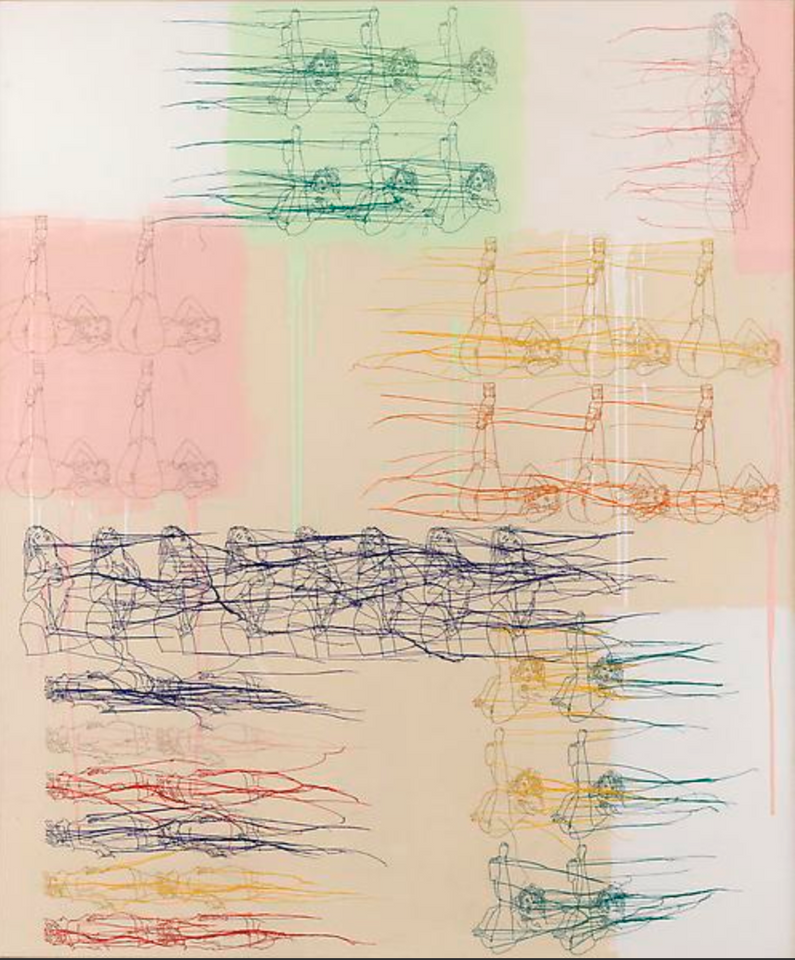 One of the talking points of this fair is the fact that on the hour, every hour, there is a three-minute performance created by the artist Eddie Peake, during which a young woman grinds a stone against her crotch in a masturbatory manner (Lorcan O’Neill, A26). Another is an impressive suite of drawings by Carroll Dunham at Barbara Gladstone, which includes in-your-face ­images of vaginas. But look a little more closely at the stands and it becomes clear that men are not alone in tackling the intimacies of the female form: across the fair, there are explicit works by women of women.

Of course, female sexuality is not a new subject for women artists. Also on show are earlier works dating from the 1960s and 1970s, including a suite of six photographs by the late artist Ana Mendieta, who distorts notions of desire by pushing a pane of glass against her crotch and breasts in close-up shots in Untitled (Glass on Body Imprints), 1972 (priced at $65,000). “She uses glass to fragment her body,” says Mary Sabbatino of Galerie Lelong. “It’s very subversive when a beautiful woman deliberately looks unattractive.”

The increasing preponderance of such images is “the result of developments in art-historical and critical thinking”, says the art adviser Allan Schwartzman. It is also “born of necessity by a market curious for, and in need of, material beyond the drying wells of traditional supply”. This phenomenon is also focusing attention on the work of older artists, some of whom have been toiling for decades in obscurity.

A common strategy among artists today is to playfully subvert initial impressions. For example, a delicately embroidered canvas by the Egyptian-born artist Ghada Amer—The Slightly Smaller Coloured Square Painting, 2001, priced at $200,000 with Cheim & Read—appears to be a coloured abstract, but closer inspection reveals that it is a work about self-stimulation. “I see painting as male,” Amer says. “I wanted to use a medium given to women by art history to challenge that.”

Walker, whose massive new installation A Subtlety opens on Saturday in a former sugar factory in Brooklyn, is just one of many women artists interested in the female form whose work is currently included in major shows in New York. Another is the late Viennese painter Maria Lassnig, who died this week and is the subject of an exhibition at MoMA PS1 (until 25 May). Her unflinching examination of her own body is “absolutely essential to our understanding of this subject”, says Hans Ulrich Obrist, the co-director of London’s Serpentine Gallery.

“The perception of female artists has changed; what was once dismissed is now taken more seriously,” says Glenn Scott-Wright of Victoria Miro gallery.

Some concerns go beyond gender, says the New York gallerist Gavin Brown (B38), who recently staged a show that included graphic depictions of female genitalia by Judith Bernstein. “I suppose if a man had done all those paintings of cunts and cocks, it might have been spoken about differently, but the subject was universal—[it was] about the birth of the world,” he says. “Men have been sublimating images of their cocks for millennia, so why can’t women do the same?”