The Albertina mounts a display of the Hahnlosers' relatively unknown treasures

The Albertina in Vienna is showing over 80 works from the Hahnloser family, including six Van Goghs. Entitled Van Gogh, Cézanne, Matisse, Hodler: The Hahnloser Collection, it emphasises the astonishing range of Modern art assembled by Arthur and Hedy Hahnloser a century ago in the Swiss city of Winterthur, outside Zurich.

Their home, the Villa Flora, became a temple to the muses. The Hahnlosers conceived their display of paintings, their strikingly modern interior decor and their designed garden as an ensemble—a total work of art.

The eye doctor Arthur Hahnloser (1870-1936) and his wife Hedy Bühler (1873-1952) collected pictures by Renoir, Cézanne, Gauguin and Toulouse-Lautrec, as well as by their artist-friends, including Bonnard, Hodler, Matisse, Maillol, Redon and Vallotton.

The Hahnlosers once owned 19 Van Goghs, putting them among the earliest major collectors of the artist’s work in the 20th century. They searched voraciously for Van Goghs and in 1912 came across five early works being sold by a Dutch grain seller for a total of 6500 francs (then equivalent to around £250). Six of the Hahnloser Van Goghs have just gone on loan to the Albertina—some from the family foundation, some from Swiss museums and one from a private family owner.

Van Gogh meant a great deal to the couple. In 1912, when Hedy lost her mother, suffered tuberculosis and fell into a depression, she wrote to Vallotton: “For days I have been reading the letters of Van Gogh, and am overwhelmed. What an ardent and tormented soul.” 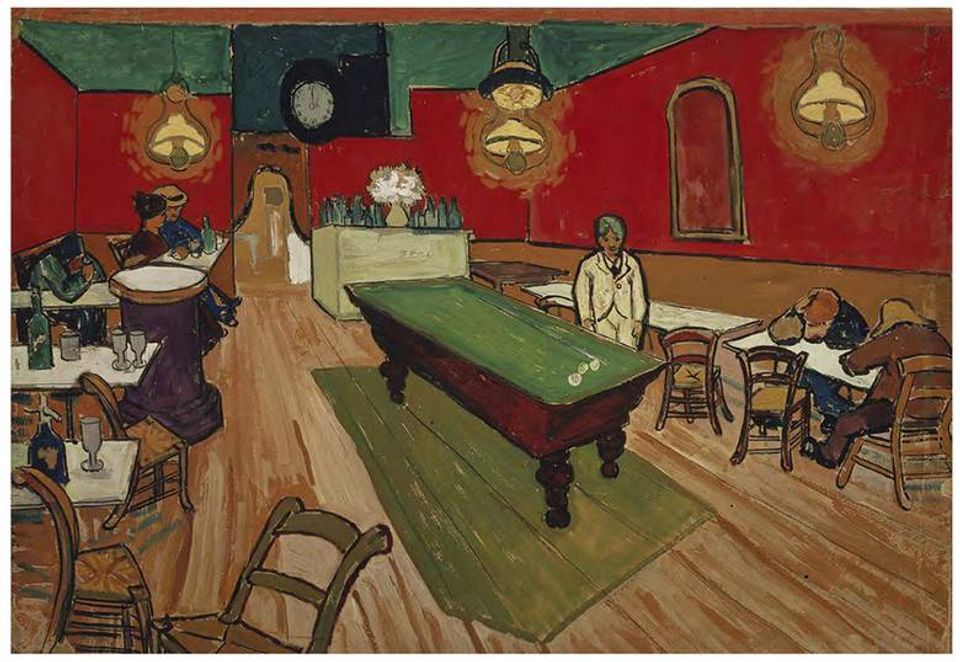 The biggest treat in the Albertina exhibition is the chance to see The Night Café in Arles (1888). As a fragile gouache on paper, it can only be shown occasionally and was last displayed outside Switzerland in 1984. The colours remain breathtakingly strong, and are even more powerful than Van Gogh’s original version in oils (now at Yale University Art Gallery, New Haven).

In September 1888, Vincent had written to Theo about the paintings of the “night café”, where he had lodgings: “I’ve tried to express the terrible human passions with the red and the green… Everywhere it’s a battle and an antithesis of the most different greens and reds”. Last year a family descendant donated their gouache version to their Hahnloser/Jaeggli Foundation. 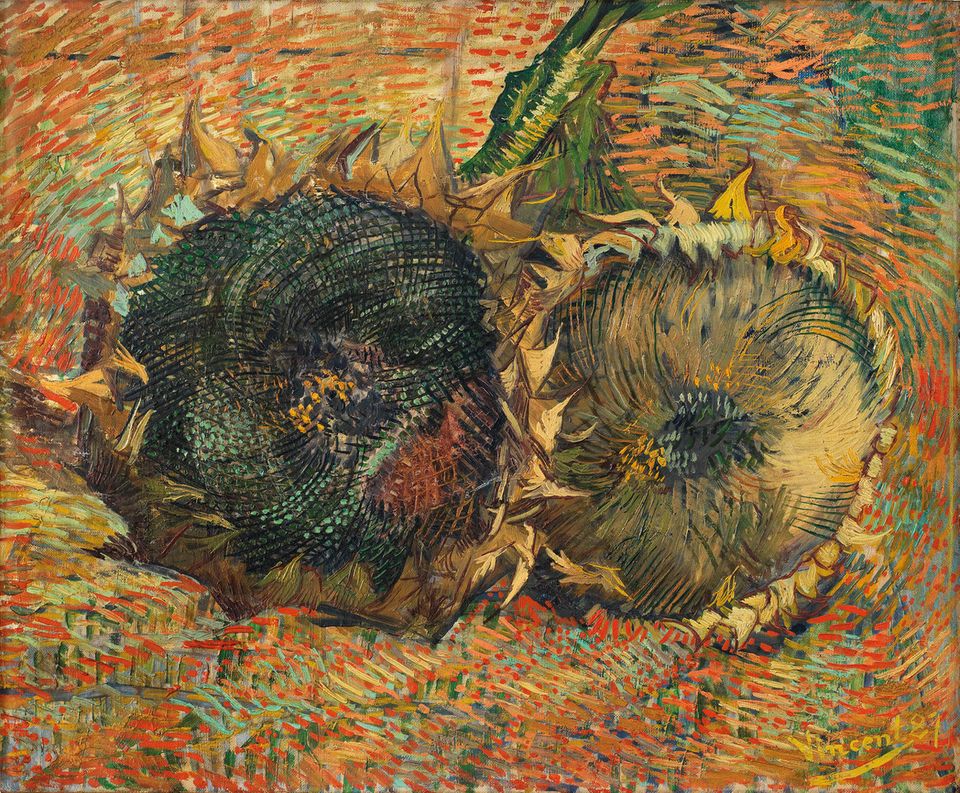 Two cut Sunflowers (1887), once in the collection of Edgar Degas, is among four still lifes of the flowers which Van Gogh painted in Paris—a precursor to the more famous works he did in Arles. In 1920, Hahnloser’s artistic advisor, the artist Henri Manguin, described this Paris work as “one of Van Gogh’s most extraordinary pictures, superb”. After Hedy’s death it was donated to the Kunstmuseum in Bern. 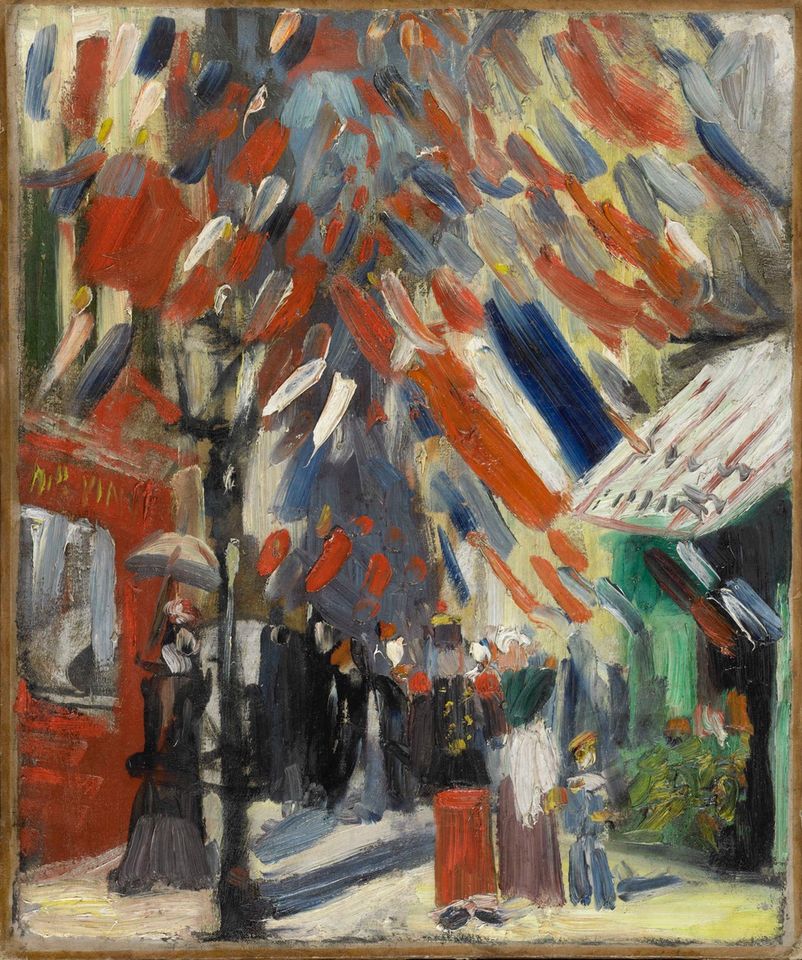 The most intriguing Van Gogh in the Albertina show is The 14th July in Paris (1886), since its authenticity has in the past been questioned. In 2002 it was regarded as only “ascribed to Van Gogh” in the Hahnloser’s own catalogue, although it is now more widely accepted. The issue is that the picture is stylistically atypical for Van Gogh’s Paris period and painted in an unusual manner for him. Nevertheless, it was first exhibited as a Van Gogh in 1901, which would be very early for a fake, although it might just be a misattribution. At the Albertina it is now displayed as a fully accepted Van Gogh. 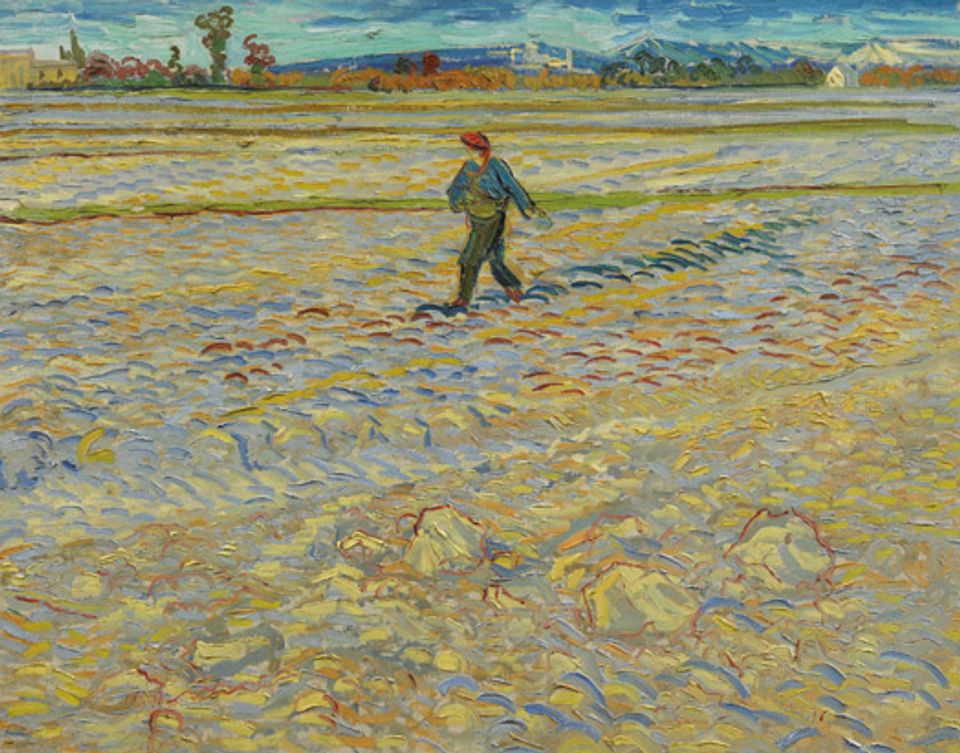 Vincent van Gogh’s The Sower (1888) Courtesy of Kunstmuseum Bern, on permanent loan from the Hahnloser/Jaeggli Foundation

The Sower (1888) is a powerful Arles landscape, depicting a striding farmer scattering seed for the next crop, with the hills of Montmajour visible in the background and just a sliver of sky. The earth is composed of slashes of a wide variety of colours. Van Gogh painted it at the height of his powers. 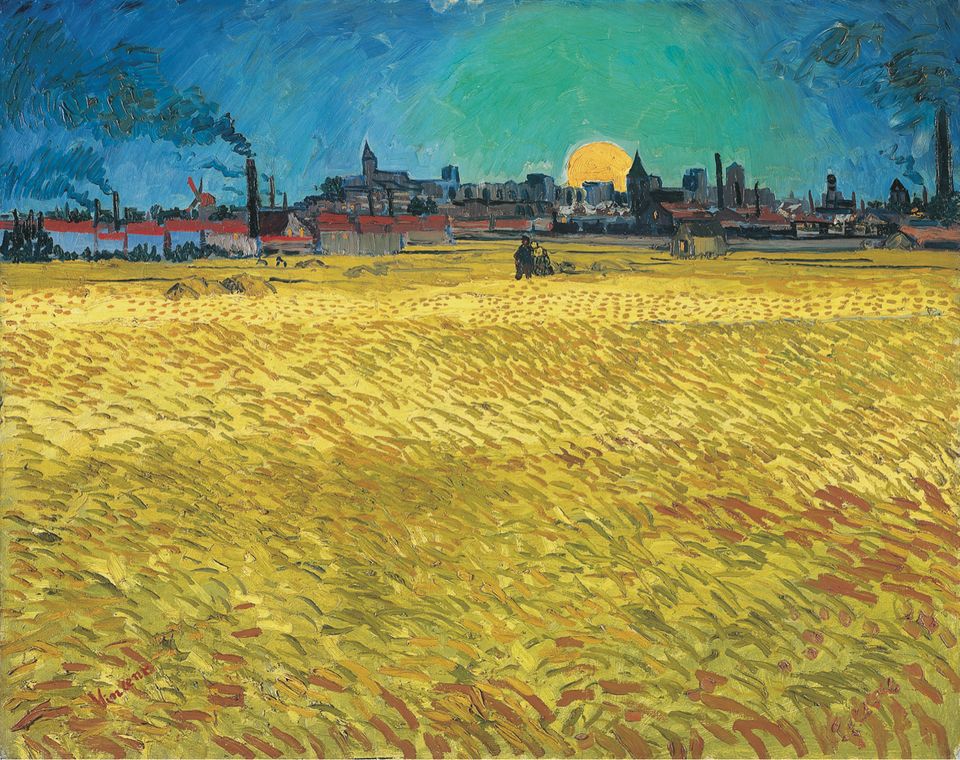 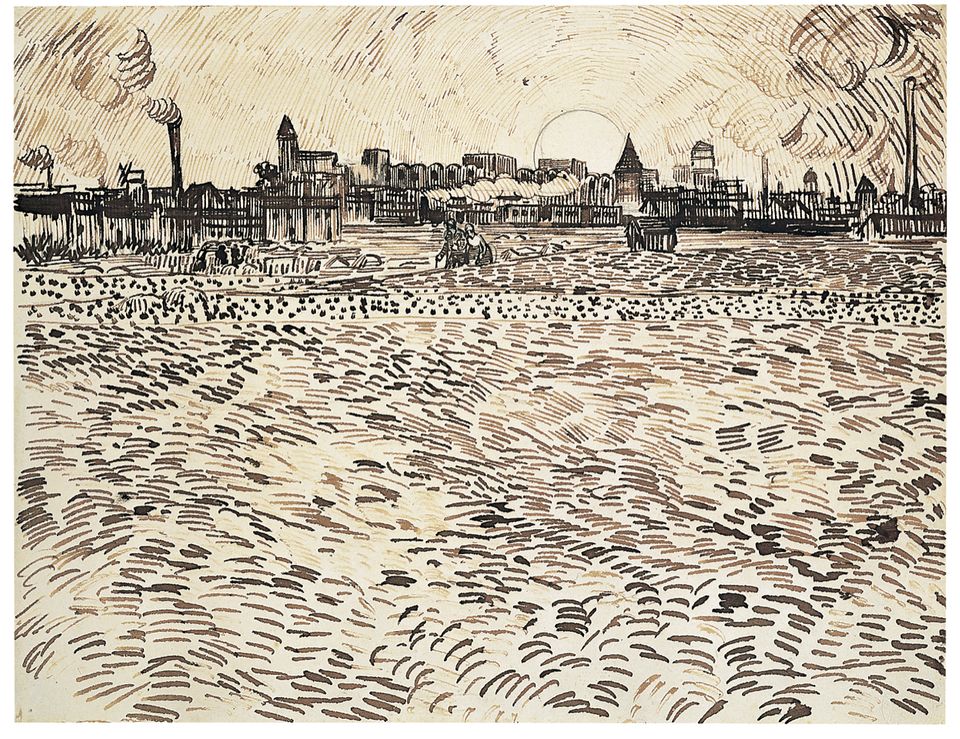 The Hahnlosers owned two versions of another magnificent Arles landscape, Summer Evening (1888)—Van Gogh’s original oil painting and his drawing after the work. They depict a couple strolling through a golden wheatfield, with the silhouetted town of Arles in the background and a symbolic setting sun. Both the painting and the drawing were donated to the Kunst Museum Winterthur. At the Albertina just the drawing is being shown.

Weaver (1884), the final Van Gogh on loan to the Albertina, is an early work done while the artist was living with his parents in the Brabant village of Nuenen. Arthur Hahnloser came from a family of cloth manufacturers and dealers, so this picture may have had a personal meaning for him.

Although many of the Hahnloser Van Goghs remain with the family and their foundation, around half have been gradually sold off over the decades. The most recent to go was People strolling in a Park in Paris (1886), which was auctioned at Sotheby’s last November for $9.7m.

The Albertina is seizing an opportune moment to mount their exhibition. The Villa Flora is currently being renovated and arrangements for opening it to the public are to change. Although the artworks will continue to be owned by the family foundation, responsibility for running the villa is passing to the Kunst Museum Winterthur, which hopes to reopen the Hahnloser family home in 2023. This will offer a wonderful opportunity to see their magnificent collection in situ.

• Making Van Gogh: A German Love Story, which closed on 16 February at the Städel Museum in Frankfurt, attracted 506,000 visitors. It was the museum’s most popular exhibition ever.

• London’s Sunflowers are caught up in coronavirus quarantine. The National Gallery announced today that the opening of its travelling exhibition to Japan, scheduled for next Tuesday, has been postponed until at least 17 March. For the full story, see our news report.