A Riot of Subversion: Welcome to Grayson Perry's House of Fun Cheeky revelations and scurrilous juxtapositions were the order of the day (Tuesday 5 June) as Grayson Perry, resplendent in a vivid clown romper suit and clutching a rubber chicken handbag, treated early visitors to a personal tour of the Royal Academy’s 250th Summer Exhibition, which this year he has coordinated under the theme of Art Made Now. Perry may have worked with a committee of fellow artist and architect Academicians, but much of this year’s brightly coloured, idiosyncratic hang carries the distinctive stamp of this most canny of democratisers.

First off, Mr P was swift to assure us that with 1,500 works to hang in just four days, “there was no time for intellectual prissiness or writing poems about the nature of material culture — it’s not Documenta!” He also confirmed that it had been his decision to invite the Portuguese artist Joana Vasconcelos to submit the giant rearing tasselled textile sculpture Royal Valkyrie (2012-17), which looms in the Wohl Central Hall, ushering in what he described as “a unique and joyful festival of art-making”.

In this cheery spirit, Perry was responsible for the brilliant yellow walls and much of the packed hang of the largest gallery, with your correspondent delighted to learn that his choice of wall colour had apparently been inspired by the citrus-hued décor of her own sitting room. However, unlike Casa Buck, the works lining the RA’s Gallery III include a piece by Banksy influenced by a UKIP placard and valued at £350m, as well as a portrait of the former UKIP leader Nigel Farage, which is flanked by a painting of a vomiting figure and another work in which an unfortunate fellow is in the process of receiving a penile injection. 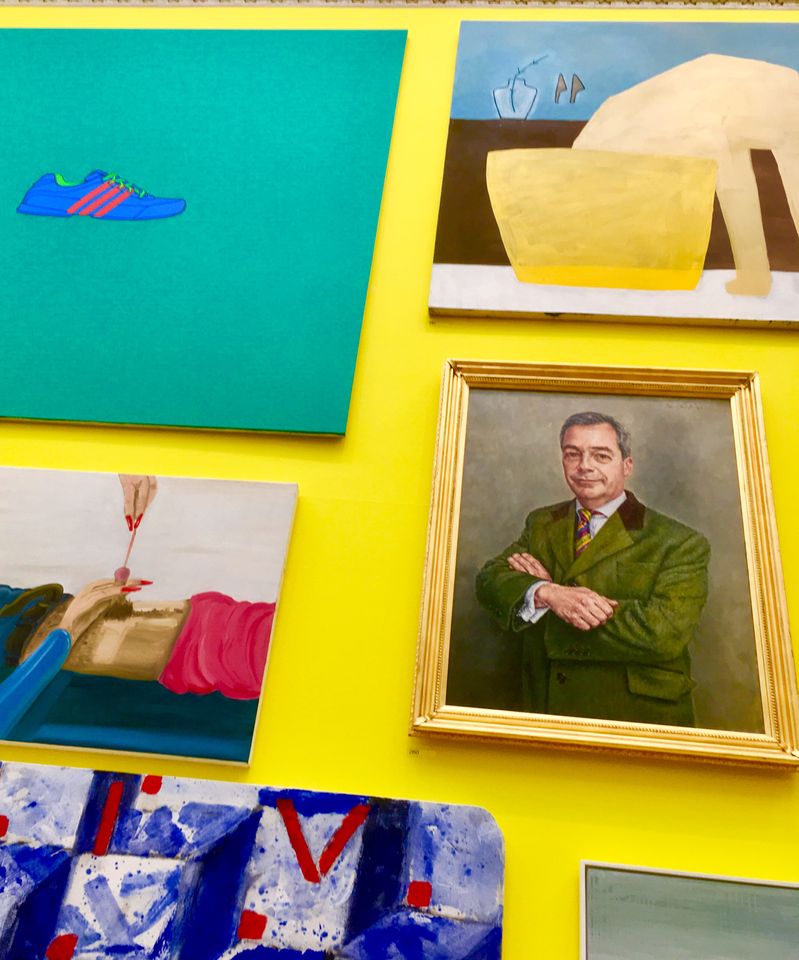 Some of the art on offer Louisa Buck

On a happier note, under Perry’s regime the new Ronald and Rita McAulay Gallery in Burlington Gardens has become a Room of Fun, filled with a plethora of multimedia visual gags including Michael Landy’s “Everything Must Go!” shopping trolley (Closing Down Sale, 1992), and a wall of Perry portraits (apparently a fraction of those submitted). Throughout all the rooms of the 250th Summer Exhibition, much of the intake reflects the chief coordinator’s love of self-taught outsider art. Perry is especially fond of a cardboard aeroplane, a floppy, knitted bicycle and a life-sized sculpture of a grinning donkey, which he has positioned peering into what he disparagingly dubs “the sacred temple to Bruce Nauman”. This is a special chamber housing a video work by the American artist and honorary RA, where no works are allowed to be hung, even on the outside walls.

Elsewhere, the works are hung high and dense, and a few celebrity art-dabblers have also found their way in. There’s a brightly hued, Basquiat-like head by comedian Vic

Reeves and a prone, rough-carved wooden figure by comedian Harry Hill, whose wife Magda Archer also has two paintings in the show. “Nepotism is the art movement we are celebrating here” was Perry’s chuckling comment; while also pointing out that his own submitted work is a “bland muted pot” that carries the title of Stupid White Thing and was “made to blend in with the interior décor of rich art collectors”. He also drew attention to one of the two works by Mrs Hill in which a cute duckling begs, “Please don’t talk to me about art!”, which could have been used as an alternative title for the show. And while he has been “playing with the brilliant toybox of art”, has Perry gleaned any tips for aspiring artists? “Make it in bronze and then it’s instant art,” he declared, mischievously gesturing towards a nearby Antony Gormley figure. A great spectacle, indeed.