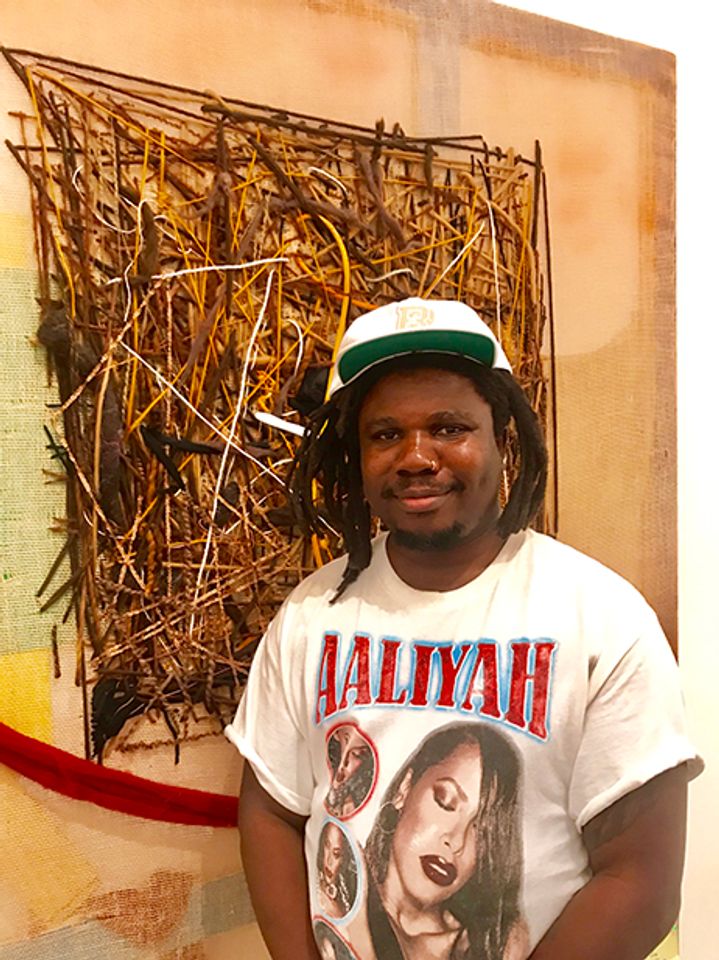 All artists use other artist’s work, but few are as candid about it as Alvaro Barrington. Artists I Steal From is the frank title of the show that he has put together at Thaddaeus Ropac, which brings together 49 artists who have been a key influence on the Caracas-born artist who graduated from the Slade School of Fine Art in 2017. His starting point is the statement supposedly made by Picasso that “good artists copy, great artists steal”. However, Barrington’s relationship with the show's artists—who range from Andy Warhol, Louise Bourgeois and Philip Guston through to contemporaries such as Lisa Brice and Chris Martin—is based on close examination, analysis and unexpected discovery rather than simple theft. The works are organised thematically into sections such as line, colour or gesture, which are then accompanied by Barrington’s annotated commentaries that are scribbled on scraps of paper, post-it notes and sometimes written directly onto the gallery walls.

As well as offering a revealing insight into an artist’s thought processes, there’s also the treat of seeing an eclectic array of some truly great works, many of which have scarcely been seen in public before. These include a rare late De Kooning painting of 1987 and a 1960s Cy Twombly drawing getting its first showing directly from the artist’s estate. Some works have also been made especially for this exhibition, most notably Katharina Grosse’s expanse of a spray-painted studio, which is in fact a vivid trompe I’oeil digital print on silk.

However, just before yesterday’s opening Barrington did confess to one direct steal. The only example of his own work included in the show is Unc you the Plug (2019), a mixed-media piece which has a dense central panel made from overlapping strands of wool, string and various forms of thread sewn into a burlap backing. Coiling through these fibrous layers is a vivid orange extension-plug, sprayed with patches of fluorescent paint which the artist admits he pinched from out of the Robert Rauschenberg estate. “I was down in Captiva [Florida] where Rauschenberg was living and I noticed this cable that had an incredible discolouration—I knew I could do something interesting with it and so I took it”, he told me. But honesty also prevailed: “I went straight out to Home Depot and I bought a new one—and I told them, 'Hey, I’ve taken your chord but I’ve got you a new one.'” Apparently there were no repercussions, which for Barrington confirmed another maxim that he has also taken to heart. “As an old Armenian friend always said to me, it is better to ask for forgiveness than to ask for permission.”

• Artists I Steal From, curated by Alvaro Barrington and Julia Peyton-Jones at Galerie Thaddeus Ropac, until 9 August