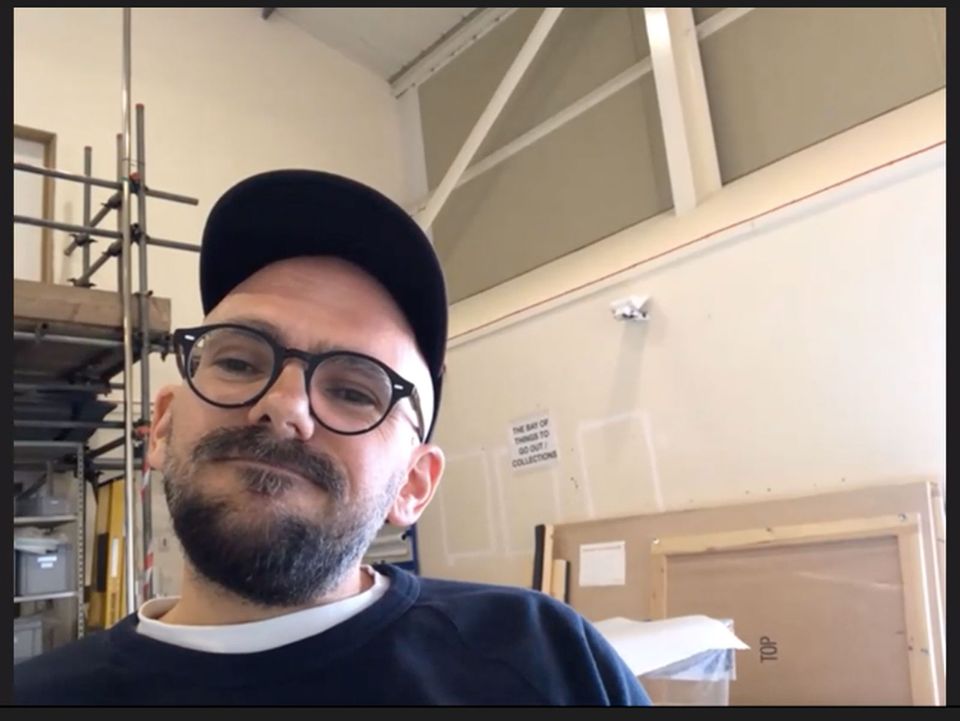 Ryan Gander during a virtual tour of his studio

Along with inspecting the domestic habitat of colleagues via Zoom meetings, another by-product of the coronavirus crisis has been the opening-up of hitherto private studios, as artists under lockdown increasingly reveal their places of work to online audiences.

This sanctum-baring often takes the form of brief and selective sneak peeks viewable on gallery websites or Instagram accounts. The night before the full-UK lockdown on 23 March, Hauser & Wirth livestreamed Martin Creed clad in back-to-front “staying-in clothes”, jamming on guitar and accordion from a cluttered corner of his London studio. Since then H&W have also launched a series of short films of gallery artists living and making their work behind closed doors. So far these have include: George Condo producing Drawings for Distanced Figures, showing socially-spaced people from the quarantined “wilderness” of his studio in New York State; Zhang Enli making Chinese pancakes in his pristine Shanghai kitchen; Guillermo Kuitca keeping his Buenos Aires studio assistants well exercised with YouTube salsa classes; and Luchita Hurtado admiring a eucalyptus tree and drawing one of the jungle of plants on her Santa Monica balcony.

On White Cube’s Instagram account, He Xiangyu in Berlin has presented a four minute in-progress demonstration of his painted and drawn Palette Project in which he gives visual expression to the inside of his mouth, while in London first Tracey Emin and then Antony Gormley have each been posted a week’s worth of daily images showing what they have been creating in lockdown. 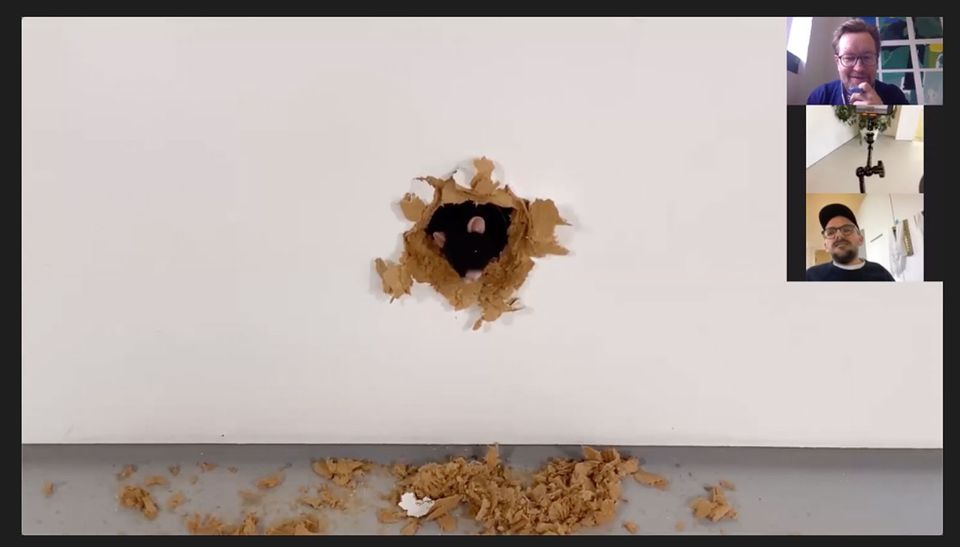 But for those hungry for a more intense in-situ experience, later today (9 April) at 6pm BST, Ryan Gander is offering a comprehensive inspection of his studio and a discussion of his ideas via Zoom. The live virtual studio tour lasts for nearly an hour and is organized by Lisson Gallery. An earlier trial run on Tuesday attracted nearly 365 visitors, according to the gallery. Viewers who logged on were able to accompany Gander and his remote interlocutor, the gallery’s Ossian Ward, in his expansive studio housed in a former radio factory in the village of Melton on the east coast of England. The format will be the same on Thursday, just a little later timewise, to make it easier for more viewers across the globe.

Whizzing round with two cameras strapped to his wheelchair, Gander describes himself as a “double dolly” and his normally buzzing studio as being “like a ghost town”. All his assistants are closeted in their various homes and the artist himself has likewise been working from his kitchen table, an experience he is finding “liberating and frustrating at the same time”. Now the studio is only inhabited—or perhaps haunted—by some decidedly uncanny artworks that form the focus of the tour. These include a life sized Bit Part Player figure made from graphite who has left a series of grubby marks trailed along an adjoining wall. “It’s visualizing an event or a touch which shows where the figure has been,” Gander says. There is also an illuminated staircase leading to a portal-like doorway drenched in light and a tiny animatronic mouse poking its head through a hole in the wall and declaiming The End, an apocalyptic text written by Gander and spoken by his six-year-old daughter. Gander explains that the loquacious rodent is the final one in his trilogy of Prophet Mice. “It talks about the idea that the real threats are the ones we cannot see,” he says.

All these works were made in advance of the coronavirus crisis, yet it is hard not to view them in the current context, something that Gander himself concedes. “We see things in context and their meaning changes,” he says. “It is interesting the way that art changes as the world changes around it.” Back in his studio for the first time in several days, Gander feels that time spent at his kitchen table has underlined the benefits of slowing down. “Maybe a part of this change will be that the time famine we have been experiencing over the last decade will evaporate and we might start feeling the world as we are in it rather than navigating our way through and always living in the future or the past.”

Marina Abramovic takes London by storm with a trio of shows

Marina Abramovic takes London by storm with a trio of shows