As the Musée d’Orsay in Paris appoints an Instagram-artist-in-residence, we look at the growing trend in museums for social media takeovers and collaborations Armed with an Instagram account, an artist can almost sidestep the real-life art world entirely: you can show your art on Instagram, sell it—even make it—all from the comfort of your armchair. Last month, the Musée d’Orsay (@museeorsay) in Paris announced its first “Instagram artist-in-residence”, reminding us of another vital part of an artist’s life that has entered the digital realm. As part of his “residency”, the French illustrator and painter Jean-Philippe Delhomme (@jeanphilippedelhomme)—also a regular contributor to our sister publication, The Art Newspaper Edition Française—will post a new image each week for a year on the museum’s social media account. “The idea is to imagine what it would have been like if late 19th-century artists had been on Instagram and had their own accounts,” Delhomme tells The Art Newspaper. His first post on 7 January, pictured below, was a sketch of the 19th-century French art critic Joris-Karl Huysmans’s imagined Instagram post, thanking the Impressionist painter Jean-Louis Forain for a portrait of him. 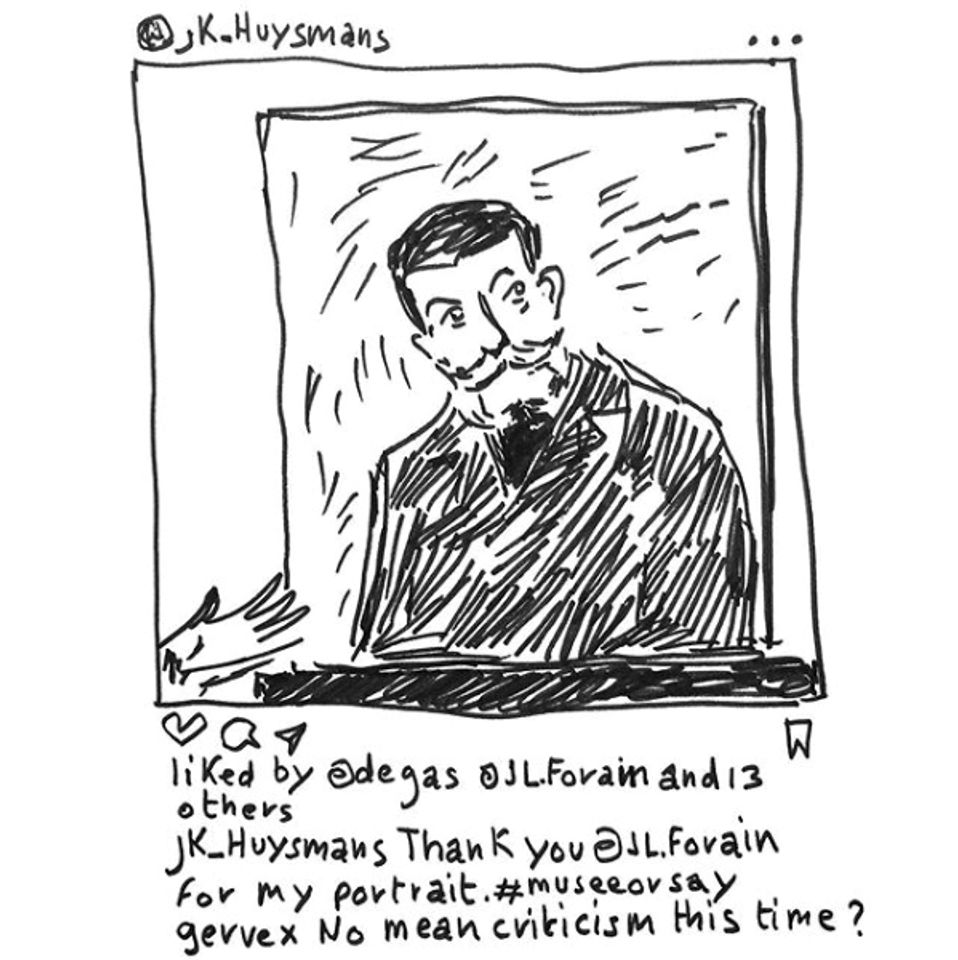 The Musée d’Orsay is not the first programme in this vein. In fact, it was Instagram itself that started the ball rolling in 2016 when it chose the photographer George Lange to be its first artist-in-residence. Lacma added the museum world to the bandwagon in 2017 when it invited the artist and archivist Guadalupe Rosales to post on its Instagram account for six weeks. Few other museums have taken up the idea of a “residency”, although many have hosted Instagram takeovers, including New York’s New Museum (@newmuseum), the State Museums in Berlin (@staatlichemuseenzuberlin) and London’s Serpentine Galleries (@serpentineuk). Even The Art Newspaper has done a takeover with the Frick Collection in New York and hosted the artist Rana Begum on its own account.

So what exactly is an Instagram artist residency? The defining feature of a regular artist residency is the ability to literally “reside” and work within the walls of an institution or venue outside of an artist’s normal space. This does not seem to be the case with these Instagram residencies, and so it may be fair to say that the use of the term is more clever marketing than innovation. Nevertheless, the Musée d’Orsay’s announcement shows that digital opportunities for artists are on the rise and becoming more mainstream than ever. Beware—the artist takeover is coming.