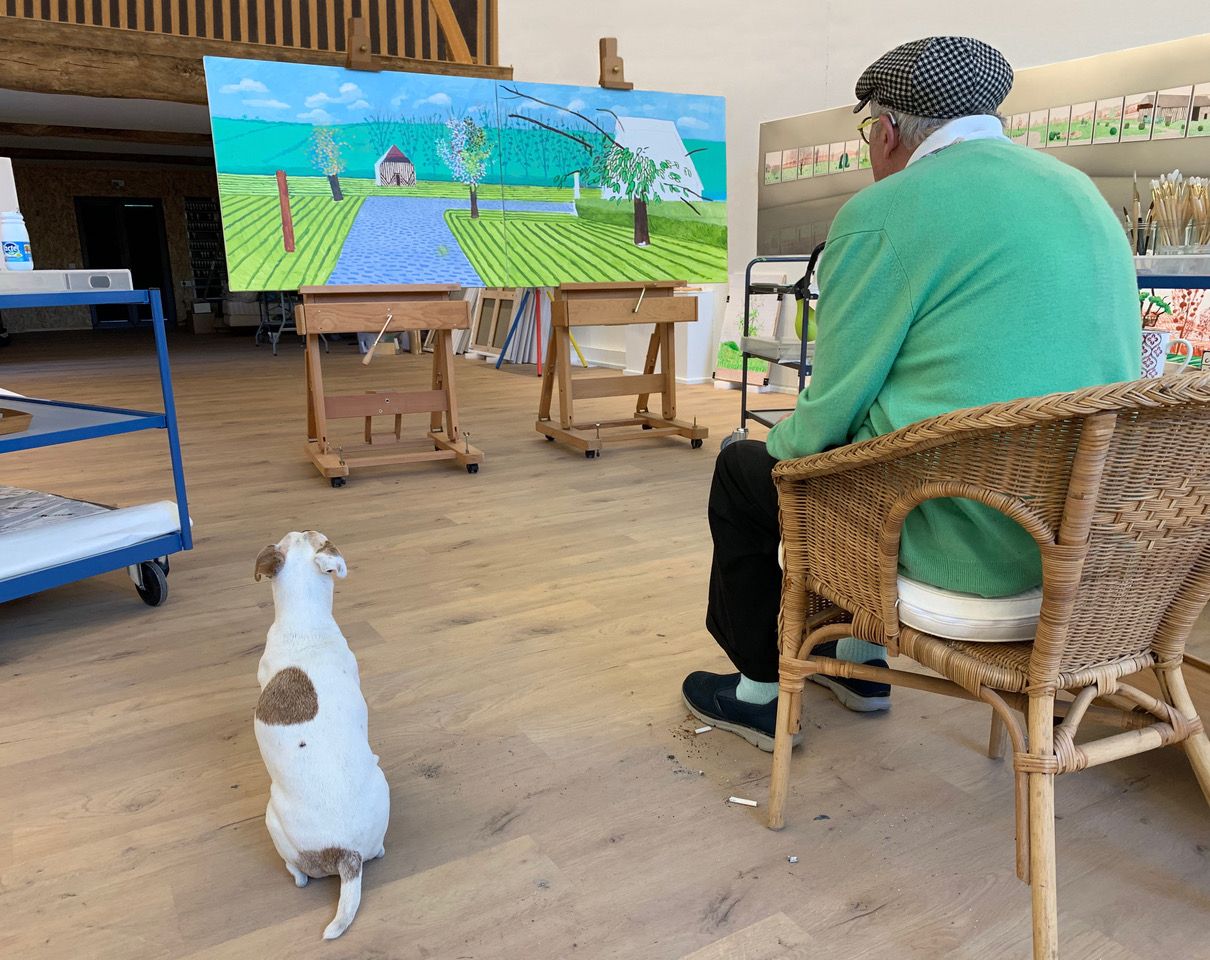 Van Gogh has long been a great inspiration for David Hockney, who always celebrates the arrival of spring. Hockney’s blossom scenes form the centrepiece of both Martin Gayford’s latest book and a forthcoming exhibition at London’s Royal Academy of Arts.

Hockney moved to France in 2019, settling in an old farmhouse near the village of Beuvron-en-Auge, east of Caen. In March last year, just as lockdown was beginning, he started a series of i-Pad pictures on the arrival of spring.

These images form the backdrop for Gayford’s conversations and musings in Spring Cannot Be Cancelled: David Hockney in Normandy, which has just been published by Thames & Hudson. The book provides a highly personal and engaging insight into the latest stage of Hockney’s life and work. 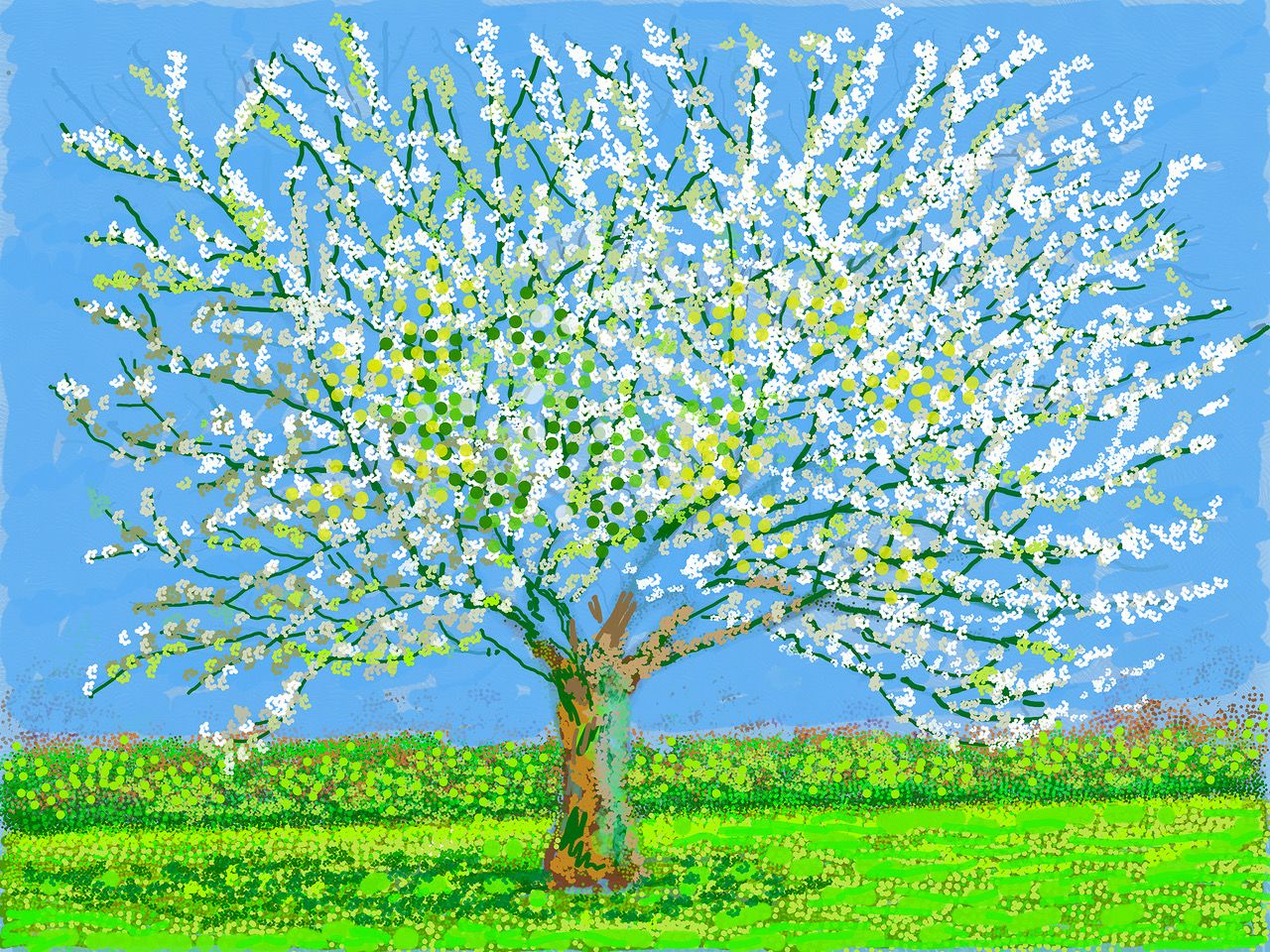 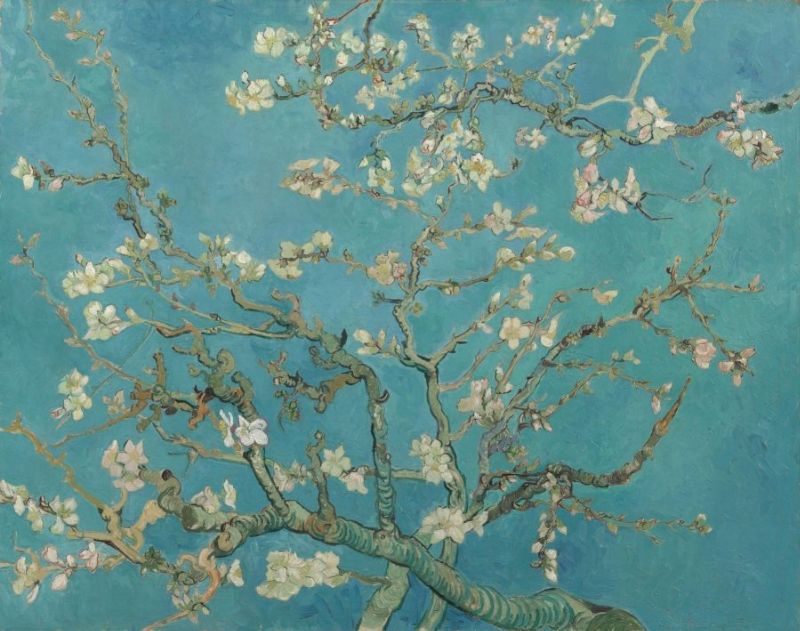 Hockney constantly thinks back to Van Gogh who, like him, was a foreign resident in France. Van Gogh enjoyed three spring seasons in the south, in 1888-90, the first two in Arles and the last while at the asylum just outside Saint-Rémy-de-Provence. It was at the asylum that he painted his exuberant Almond Blossom, after cutting a few small branches and bringing them back to the cell which served as his studio.

Hockney lives in much more comfortable surroundings—with fruit trees just outside his front door, where he can see them develop by the day. Blossom is notoriously transient, which helps explain why artists are so keen to capture it in paint. As Vincent wrote to his brother Theo from Provence: “The season of orchards in blossom is so short, and you know these subjects are among the ones that cheer everyone up.”

Now 83, Hockney has witnessed many changing seasons, but every year he enjoys them afresh. As he told Gayford: “You notice more with each successive year; I am doing that now. I can go in and look at things more closely, such as blossom.”

Along with blossom, Hockney has also been closely observing water, although he admits it is difficult to capture the effect of rain. “Japanese artists are often excellent at weather,” he says, singling out for praise the printmaker Hiroshige for his slanting downpour. Once again Hockney finds himself following in the footsteps of Van Gogh, who painted his own tribute to Hiroshige’s Sudden Evening Shower on the Great Bridge near Atake (1857). 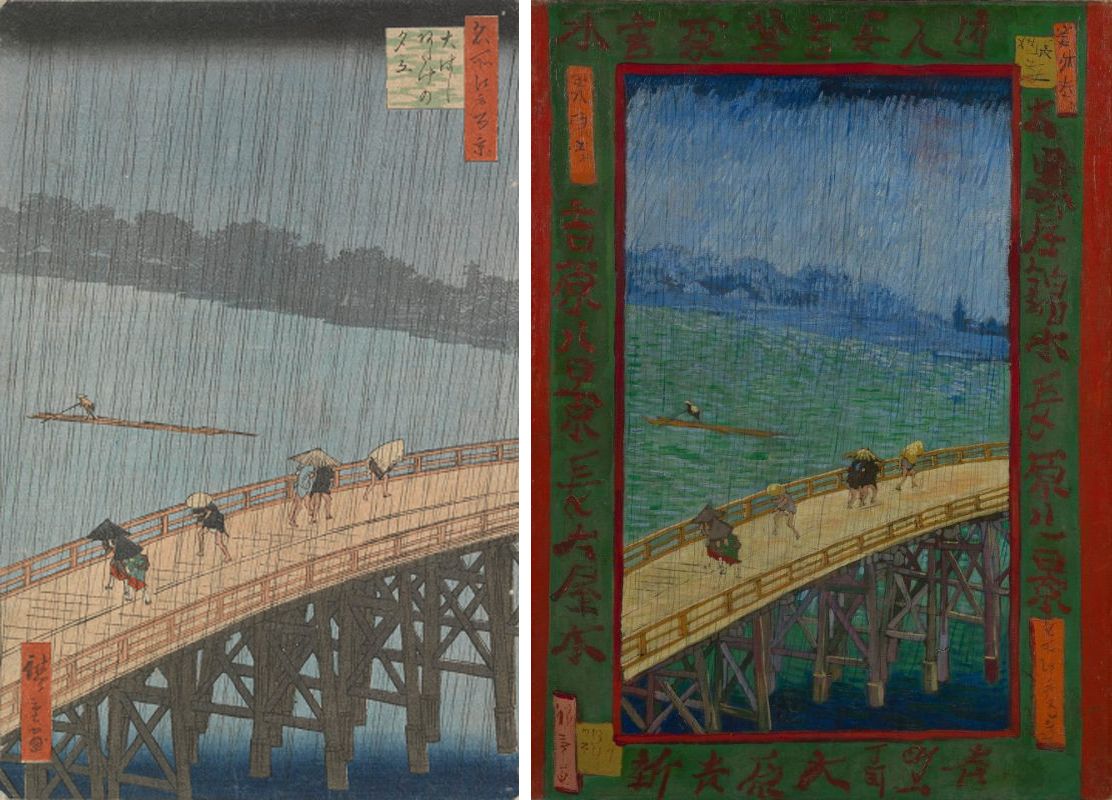 Hockney’s own interest in capturing the effects of water goes back well over half a century. A Bigger Splash (1967), a Californian swimming-pool scene now owned by Tate, remains one of his most popular pictures. Having switched from acrylic paint to an iPad, in his new French home he continues to tackle the challenges of water. 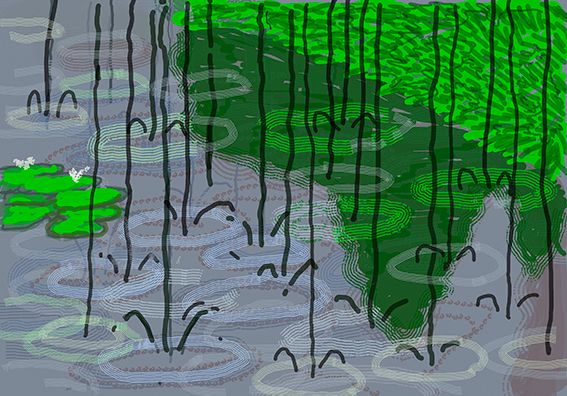 Londoners will soon have the chance to enjoy Hockney’s latest works, which offer a welcome dose of escapism. The Royal Academy of Art’s exhibition David Hockney: the Arrival of Spring, Normandy, 2020 is due to open on 23 May, a week after English museums are likely to reopen after the current Covid-19 lockdown. The show is then expected to run until 26 September (closed 2-10 August). With limited ticket availability because of social distancing, do book up quickly. 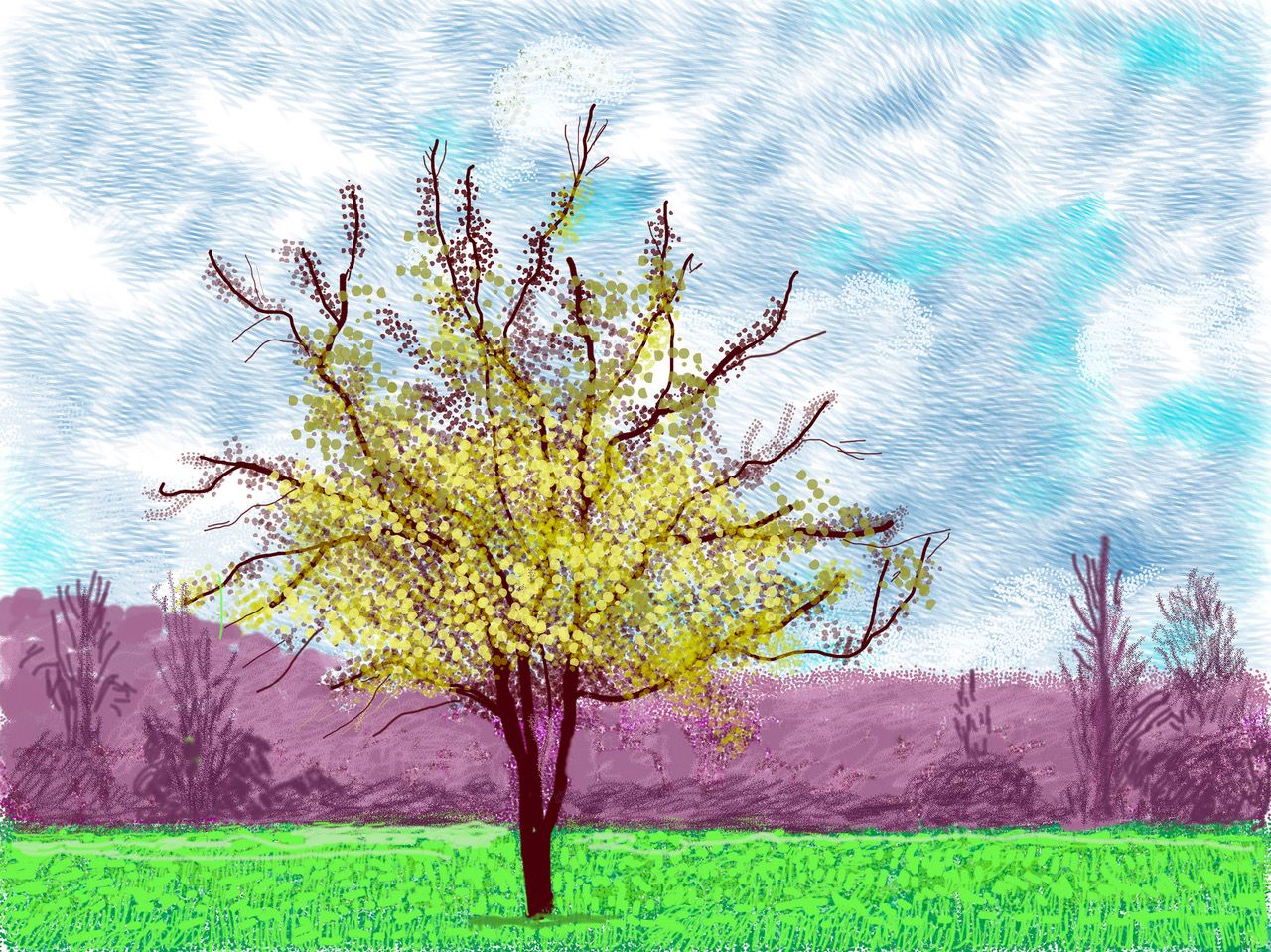 In the meantime, Hockney-Van Gogh: the Joy of Nature is due to run at Houston’s Museum of Fine Arts until 20 June. Hockney gave an interview for the catalogue, ending with his praise for the Dutchman: “The world is such a marvellous place. You have to look and to work. That’s exactly why Van Gogh was such a great artist: total commitment. That’s what you need.”

• Padua’s ambitious Van Gogh exhibition has suffered bad luck. Van Gogh: the Colours of Life, a huge show with 80 works by the artist, opened at the Centro San Gaetano on 10 October, but had to close on 4 November because of Covid-19. After restrictions were recently loosened it was then open again on weekdays only from 2 February to 5 March, but then shut again. Although scheduled to finish on 11 April, the closing date has just been been extended until 6 June. However, Italian museums remain closed and it unclear when they will be allowed to reopen.

Van Gogh: The Colours of Life is organised by Linea d’Ombra, the Treviso-Based company whose earlier blockbuster Van Gogh shows have each usually attracted over 500,000 visitors in a six-month period. The organisers are not revealing figures for the Padua exhibition, but with social distancing it is likely to be under 50,000 so far.