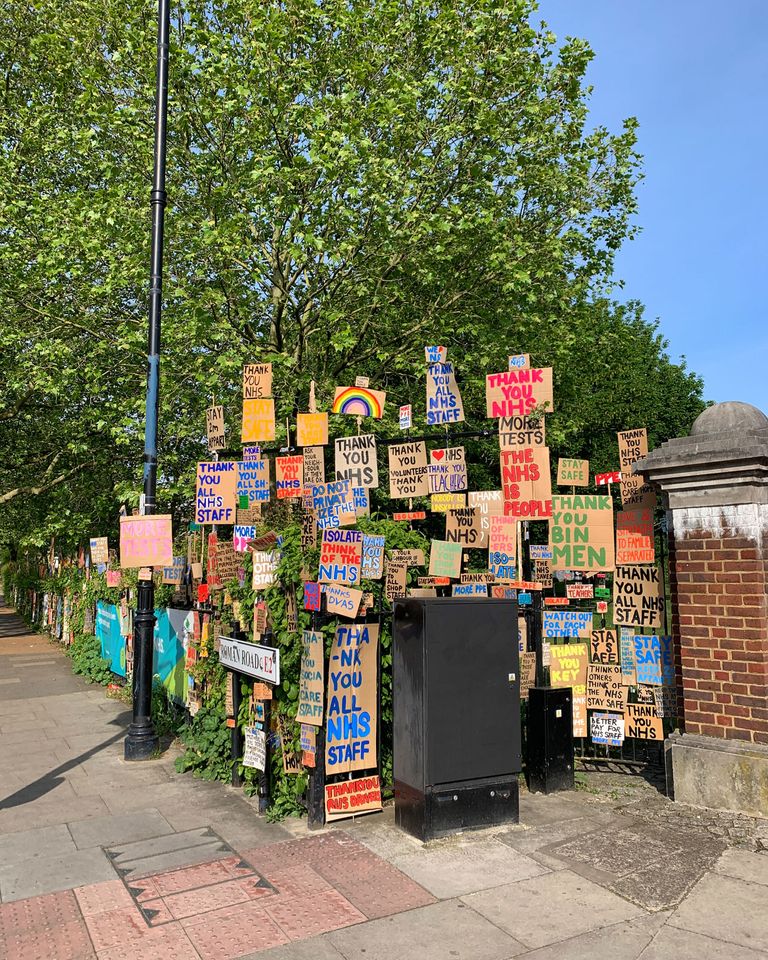 Over the past few weeks a colourful mass of hand-painted cardboard signs have been mysteriously appearing on the railings of Wennington Green, a patch of public parkland at the junction of Roman and Grove Roads in East London. Bearing positive messages of thanks and support for the NHS and key workers, the forest of over 500 placards clusters around the Roman Road sign and continues to creep further up the street, getting bigger every day. Amidst the tide of goodwill and gratitude there are also some sterner notes: “Isolate think of others,” reads one sign; “do not privatise the NHS”, “more tests”, “stay 2m apart”, “more PPE”, read others.

This ongoing outpouring is the work of the local artist Peter Liversidge, who since Easter has been enlarging his Sign Paintings for the NHS project every day and posting photographs of the signs on his Instagram account. The images have now gone viral, pictured on local, national and international media and websites around the world.

“I didn’t want any fanfare, I just wanted to do something that was changing and that responded to what was happening,” Liversidge says. “To be honest, for the first three or four weeks, I didn't really know what to think or feel about anything and I couldn't do anything.”

Sign Paintings for the NHS began as a low-key anonymous project, with Liversidge making a few notices for friends running local shops that were offering discounts for NHS workers. Then, under cover of darkness, he started to put up placards around the entrance to the park near his house. “I just wanted to thank people in the NHS and also all the wider essential workers—postmen, bin men, hospice staff, people in shops—who are just doing their everyday jobs but at the same time taking these huge risks to their lives by just doing that,” he says. “They are an unseen army supporting everyone.”

There’s also a deeply personal aspect to the project, with the majority of the members of Liversidge’s immediate family having close ties to the medical profession. “All my family are NHS: my mum was a midwife and a nurse, my dad is a medical physic, and my grandparents were both British Red Cross,” he says. “My youngest brother works for a company that makes ventilators. Early on I was taught that you can only see how civilised a nation is by how it treats its most vulnerable, and the NHS has been shafted for so long by successive governments.”

Making this work has now become a daily lockdown ritual. Every afternoon Liversidge paints the signs in acrylic paint on cardboard—sometimes there have been over 40 in a batch—drying them off with hair dryers and putting them up each night. He has been greatly encouraged by the response he receives while on his nocturnal excursions as he adds to the signs. “The Homerton and the Royal London hospitals are both very close, and NHS workers often pass by,” he says. “A few days ago, I had a great conversation with a retired doctor who said that the signs had really cheered up all the wider NHS family she was still in contact with. Then I’ve had a car full of nurses all applauding as they drove by; and one night an ambulance driver rolled down his window and shouted, ‘That’s fucking brilliant!”’

Liversidge has used protest-style placards in his work before. In 2017 he joined forces with local people to make Sign Paintings for Plymouth at the Plymouth Council House; other community-based projects have included Notes on Protesting, a performance with songs, banners and placards made with local schoolchildren at the Whitechapel Gallery in 2014. For The Bridge, a choral piece in Tate Modern’s Turbine Hall, he brought together 20 choirs singing specially written songs to celebrate the opening of the Switch House building in 2016. 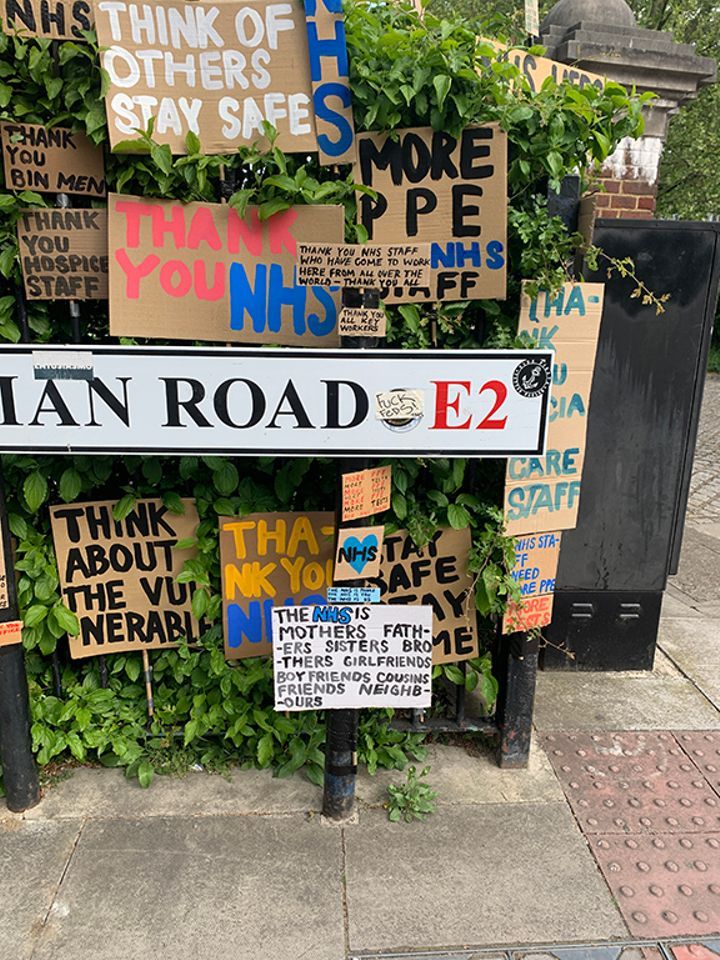 Given this history of collaboration, Liversidge is happy that more people are now beginning to add their own additions to his Painted Signs for the NHS. These include a nurse who wants to honour a colleague working in a local surgery who died from Covid-19. Apart from the removal of one notice thanking the police, the signs have so far remained unscathed and Tower Hamlets Council has prudently refrained from removing something so favourably received both at home and abroad. Perhaps they also recall the wave of adverse publicity generated by the council’s premature demolition of Rachel Whiteread’s monumental House, which back in 1993 stood just a few metres away from where Liversidge’s signs are today.

Apparently, several London museums have expressed an interest in the work, but Liversidge is not sure how the project will play out. “I can’t keep it up at this rate,” he admits. One option might be “to go out one night, take it all down and just remove it”, and another could be to hand it over for others to continue. The practical constraints of lockdown may prove to be the deciding factor. “I’m running out of glue-gun glue, and once that happens in about a week there’ll be a pause before I get some more—if can I get some more,” Liversidge says. “Maybe that will mark the end of my involvement.” Whatever the outcome, East London and the world at large are closely watching this space.