In this rare depiction of Vincent, now in a Hiroshima museum, he is observing a raucous cabaret in Paris Henri de Toulouse-Lautrec’s The Refrain of the Louis XIII-style Chair at the Cabaret of Aristide Bruant (1886), 78cm x 50cm, with Van Gogh circled Courtesy of Hiroshima Museum of Art

Although we know Van Gogh so well from his 36 painted self-portraits, depictions of him by other artists are rare. We can now add another—from no less a hand than his friend Henri de Toulouse-Lautrec, the lover of Montmartre nightlife. This drawing is now in the collection of the Hiroshima Museum of Art.

Vincent is the small caricatured figure at the very back, just to the left of the pillar. He has a beard, moustache and a tuft of hair on his forehead. Although normally dressed shabbily, here Van Gogh appears smartly attired, with a tie and hat.

The little-known discovery that the figure in this cabaret scene is “likely” to be Vincent was made by the Van Gogh Museum’s senior researcher, Louis van Tilborgh. It was recently published in the museum’s catalogue of Japanese prints. 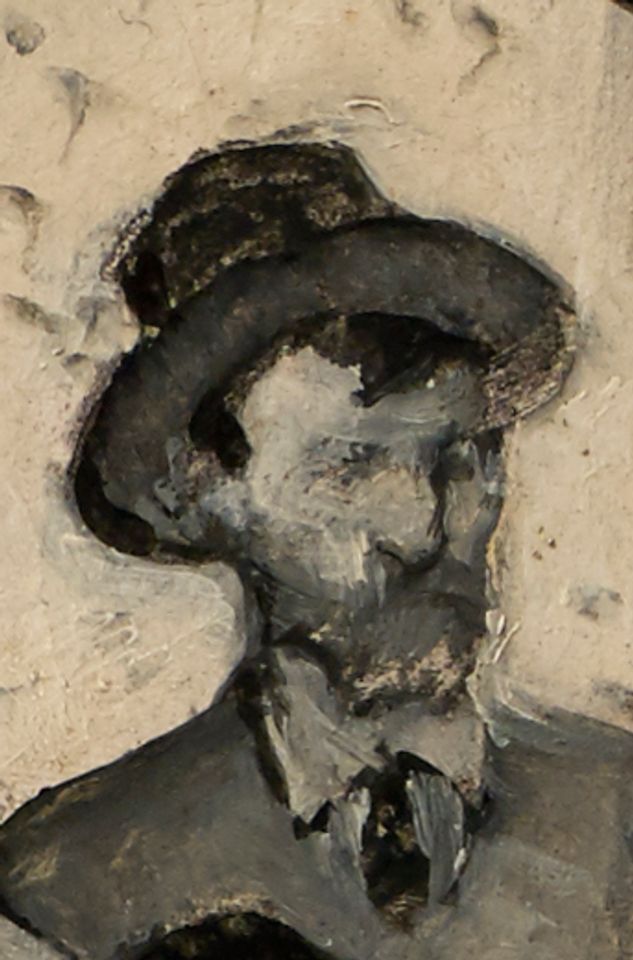 The Toulouse-Lautrec sketch depicts a scene at the cabaret Le Mirliton, located at the bottom of Montmartre, which was run by the popular singer Aristide Bruant.

Van Gogh’s presence suggests he was a regular customer at the Bruant cabaret—and he certainly enjoyed the nightlife and drank considerably while living in Paris. Paul Signac, another artist friend, recalled of him that after work “the absinthes and brandies would follow each other in quick succession”.

Just below Van Gogh in the drawing is Toulouse-Lautrec himself, almost hidden because of his low stature. He sports a bowler hat, which he frequently wore in photographs. His disguised signature appears on the edge of the bench at the bottom of the drawing, with the two syllables of Lautrec reversed to read “Treclau”.

The man with a pointed beard just to the left of Van Gogh and Toulouse-Lautrec is probably their artist friend Louis Anquetin. Several other figures are avant-garde poets.

The subject of Toulouse-Lautrec’s 1886 drawing would have been well known to Parisian night-life aficionados at the time, although it now seems obscure. The story is revealed in its title: The Refrain of the Louis XIII-style Chair at the Cabaret of Aristide Bruant.

In 1885, the famed cabaret Le Chat Noir (Black Cat) was moving out of its premises in the Boulevard de Rochechouart. The Chat Noir patrons turned the move into a boisterous procession, playing music and helping to carry the nightclub’s furniture to their new site. But in the excitement, they forgot and left behind a Louis XIII-style chair.

The following day the Chat Noir wanted to reclaim their chair, but Bruant, who was setting up his own café-concert in their old premises, refused to hand it over. Instead Bruant hung the confiscated chair upside-down just under the ceiling of his club as a trophy—and making it the butt of one of his famed satirical songs. The indistinct outline of the upside-down chair can be made out in the upper-right corner of Toulouse-Lautrec’s drawing (with the text “Louis XIII” just discernible).

In the sketch Bruant, with his trademark floppy hat, stands centre-stage, wielding his conductor’s baton and singing his refrain. The song mocks the owner of the Chat Noir who had left behind his Louis XIII-style chair.

Bruant, who named his cabaret Le Mirliton (a type of flute), soon became a leading figure in the night life of Montmartre. In 1893 he would be depicted in one of Toulouse-Lautrec’s finest posters. 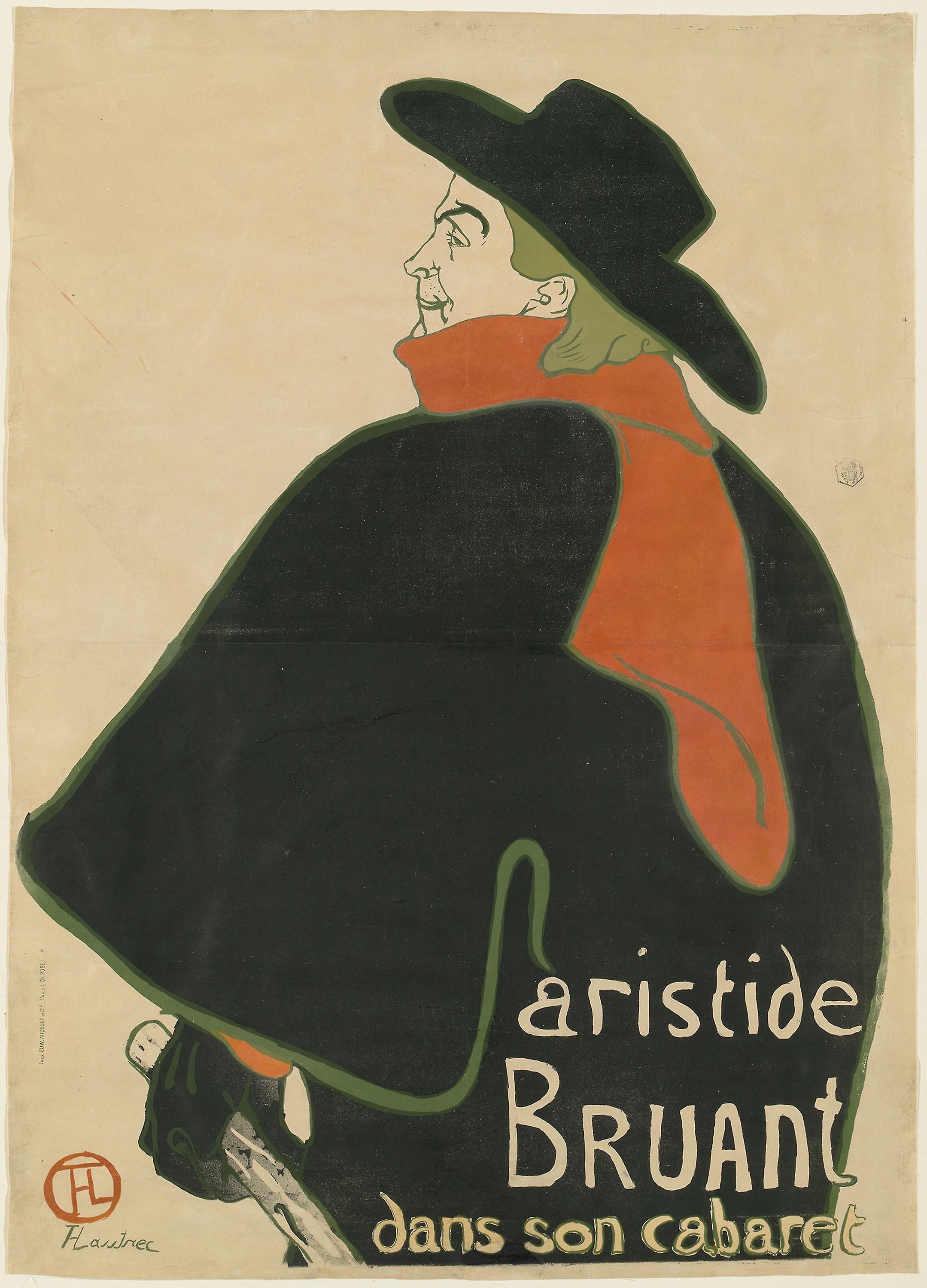 Toulouse-Lautrec, aged 21 when he made the drawing about the chair, had got to know Van Gogh in Paris. They lived only five minutes from each other in Montmartre and both had studied at the nearby studio of Fernand Cormon. In 1887, Toulouse-Lautrec made a marvellous pastel portrait of his friend in a bar (possibly Le Mirliton), a glass of absinthe at hand. Van Gogh, aged 34, stares ahead, deep in thought. 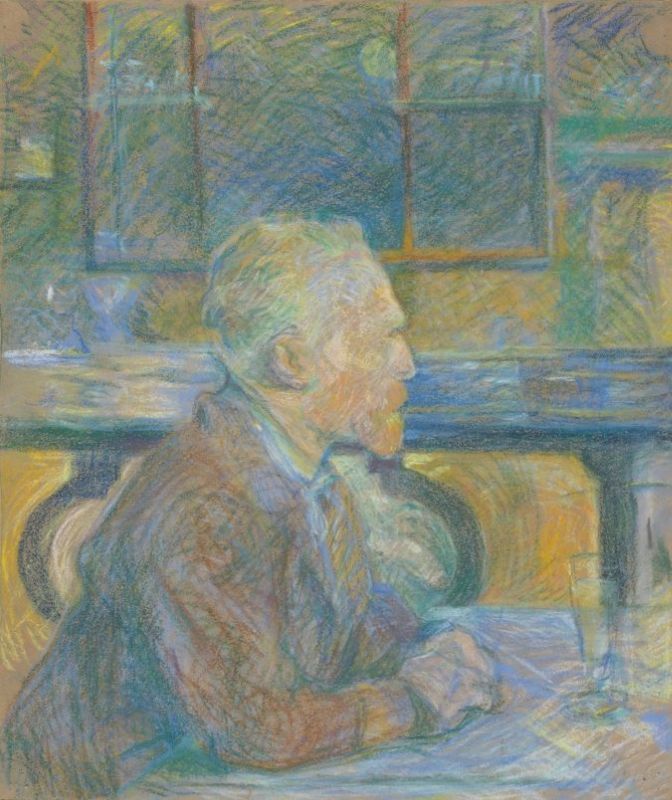 And what happened to the drawing of The Refrain of the Louis XIII-style Chair at the Cabaret of Aristide Bruant? Toulouse-Lautrec gave or sold it to Bruant, who kept it until 1905. In 1967 it was bequeathed to New York’s Metropolitan Museum of Art. No one then apparently realised that Van Gogh was depicted in the scene and five years later it was auctioned off for $45,000 to raise funds for other acquisitions.

The Toulouse-Lautrec drawing was later purchased for the Hiroshima Museum of Art, where it normally hangs among a remarkable group of Impressionists and Post-Impressionists. Opened in 1978, the museum rapidly assembled an important collection of modern European art (including a Van Gogh painting, The Garden of Daubigny, 1890). Its building pays homage to the Atomic Bomb Dome, the one structure that survived in the central part of the city after the tragedy of 6 August 1945. The museum’s motto, “For love and peace”, represents a prayer for the more than 100,000 people in Hiroshima who lost their lives and the others who suffered.