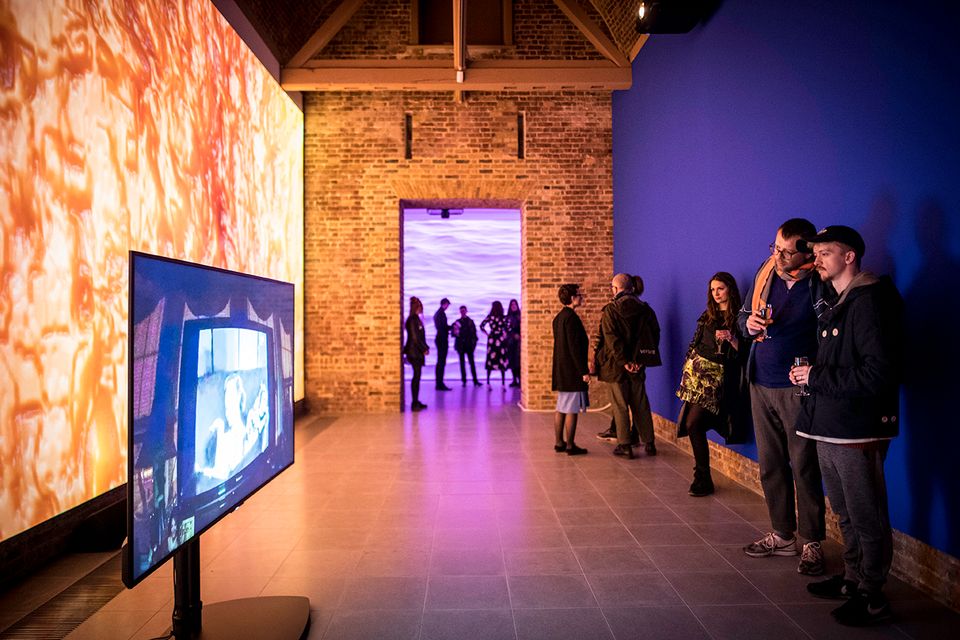 Cutting edge technologies have a strong presence in London this week and the art world turned out in force on Monday (5 March) to salute the Serpentine Galleries’s digital double whammy of Ian Cheng’s constantly-evolving litter of artificial life forms all called BOB (until 22 April), which stands for Bag of Beliefs, and in the Sackler Gallery, Sondra Perry’s Typhoon Coming On (until 20 May), her powerful first solo show in Europe. A conspicuous presence was the US artist Joan Jonas, in town for her Tate exhibition opening next week, and an especially appropriate attendee given that she pioneered the use of video in her performances in the 1960s and was one of the first artists to incorporate live feeds into her work.

The artists Tomma Abts, Mark Leckey, Tino Sehgal and Ed Fornieles were also among the crowd gathered to experience the way in which Perry has engulfed the interior of the Sackler in a seamless immersive wraparound diorama that alternates rolling purple waves with a fleshy boiling seascape. The latter is in fact a digital rendering of the surface of the great Turner painting, Slave Ship (Slavers Throwing Overboard the Dead and Dying, Typhoon Coming On) (1840) from which the show gets its name. The original painting depicts the drowning of 133 slaves by the captain of the Zong in 1781, but here Perry has removed all traces of the bodies and the ship, and manipulated the surface with wave-simulating software to create a new and visceral memorial to this atrocity.

Joan Jonas at the Serpentine Galleries

Inside the Sackler Gallery’s two central chambers, Perry’s works grapple further with the vexed role of technology in shaping the multifaceted narratives and experience of blackness, both historical and contemporary. These entanglings of technology with issues of identity include a Skin Wall based on an animated extreme close up of the artist’s skin. There is also an exercise bicycle fitted out with three screens upon which a bald avatar of the artist delivers a monologue criticising contradictory notions of productivity and what constitutes success under capitalism. More symbolic shackling to the voracious maw of our capitalist society also takes the form of a rowing machine-cum-workstation, again kitted out with information screens and rendered especially difficult to operate due to its mechanics being filled with Wet and Wavy hair gel, a product designed specifically for the black market.

Although Joan Jonas declined to use these pieces of participatory equipment, she and Perry had a spirited exchange in which they discovered a shared enthusiasm for the Black Panther movie and resolved to meet up when back in New York for a repeat viewing in Harlem. Sounds like an excellent date.