Joan Jonas swims with the fishes at Danspace Project 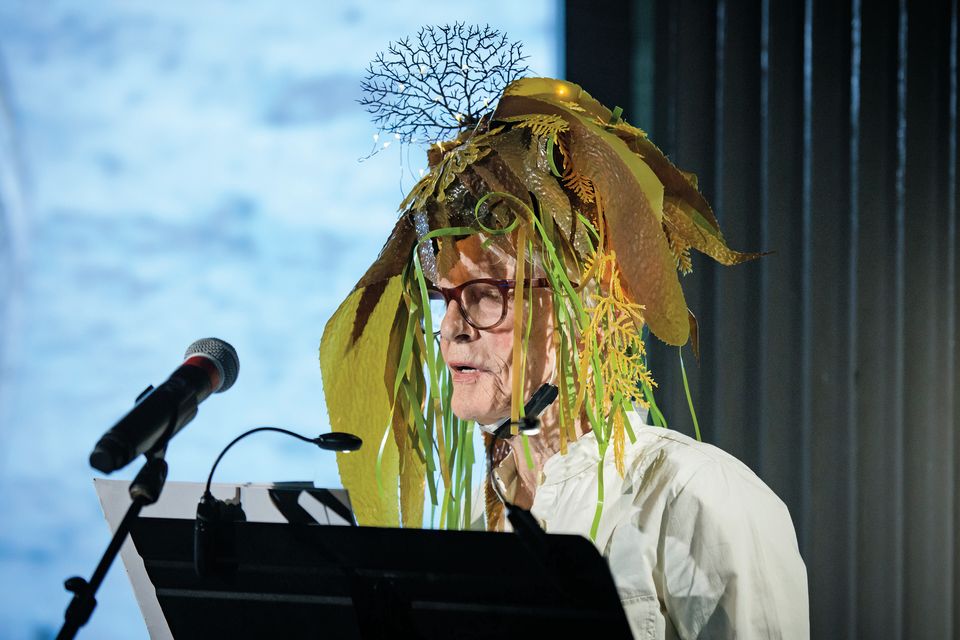 When people describe her as a “performance artist”, Joan Jonas tends to make a face. “I’m an artist,” she’ll say, in her blunt, plainspoken way. “That’s it.”

As if to drive home the point, the 2018 Kyoto Prize for art—Japan’s highest, privately funded, global achievement award—recently went to the 82-year-old Jonas. (It comes with a ¥1million ($915,000) cash prize and a gold medal.

Though short of five feet tall, Jonas clearly is a giant. She has defied expectations as well as any attempts to fit her into existing categories since 1968, when she started appearing in and out of doors, in endlessly inventive spoken-word performance involving dance, video, poetry, sculpture (including furniture and masks) and mirrors, as well as wonderfully evocative drawings, usually of her dog, sometimes made with brushes or sticks, live onstage. Together, they fragmented reality, stirred the senses, and called attention to fairytales, myths, folk songs, the mysteries of the female body and certain animals. More recently, inspired in part by the lyrical writing of the marine biologist Rachel Carson (the mother of environmentalism), Jonas has turned to fish.

They are the focus of Moving off the Land—Notes and Sketches, an hour-long immersion in visual splendour and sound (by musician and composer Ikue Mori) that Jonas created over three nights (15-17 June) at Danspace Project in St Marks Church in the Bowery, just as the news from Kyoto arrived.

For the performance, a commission from Francesca von Habsburg’s TBA21 Academy (and staged previously at Tate Modern and in the central plaza of Kochi, India), Jonas wore a white paper lab coat over a white cotton lab coat and, at certain moments, a seaweed headdress adorned with strings of white lights.

True to her task-oriented, ritualistic, deadpan self, Jonas created utterly transcendent, even magical, passages with the most rudimentary means possible—a spotlight and blank white papers—reaching an emotional crescendo when she wrapped her face and stood blindly in front of the elegiacally swimming, projected fish, letting their images play over her body and disappearing into them while madly, somewhat alarmingly, ringing small bells. After which she told a funny story about a predatory octopus.

“I felt it,” she said afterward. “This material affects me too.”