Sales come second to experiences at this art fair, and the crowd of artists, curators and scenesters seem to like it that way By mid-afternoon, Rhizome’s pop-up Internet Yami-Ichi was down to just one last Glitch Sweater spoofing the Google logo by Glitchaus— a “really expensive sweatshirt” in the words of Lauren Studebaker, Rhizome’s community manager. Other internet-related ephemera started at the reasonable price of $1, and Studebaker told The Art Newspaper that she was “worried we won’t have anything to sell for the next three days”.

At least one exhibitor, Mrs. gallery of Queens, was in fact sold out: its presentation of whimsical porcelain sculptures by Genesis Belanger had found takers on all, at prices between $50 and $9,200 apiece, forcing the gallerists to turn away dozens of inquirers staring longingly at the porcelain sculptures of hot dogs – bun, mustard and all – peeking out of unzipped purses and martini glasses garnished with eyeballs rather than olives. One hopeful was overheard saying, “You know she was just discovered, practically.” Another replied: “That’s not true!” Last year, the artist, a 2012 Hunter MFA, had her first solo show at Mrs, which also sold out. 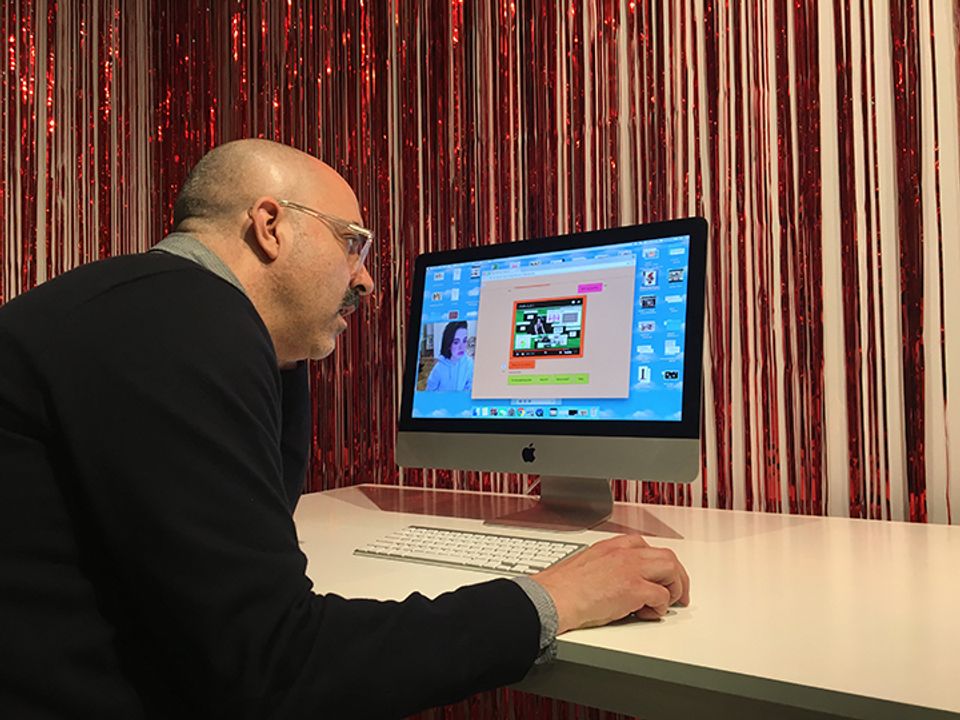 Mrs. was situated right next to the easy-to-miss Projects section, which offered a detour into a warren of multi-media mini spaces, packed with people and overlapping conversations. Here the currency of cool was almost a collegiate reverence for procrastination, the slapdash, the last-minute. One artist remarked that she had finished the cut of the video she was showing the night before. A gallerist bragged the paint was “still wet” on the pieces he was showing. Even the youngest spectators were blasé: a baby in a carrier barely reacted to the acrobatics in a video triptych by Básica tv, a collective of three Argentine artists with their own stash of beer and big smiles. Jack Barrett, the owner of 315 Gallery, looked a little dazed as he remarked, after supervising a male visitor playing with Molly Soda’s interactive digital work, a commanding chat bot instructing him to send her photos of himself and watch her various video projects: “Yeah, it’s kind of weird to bring this to an art fair, where the purpose is to sell.”

Genesis Belanger's playful ceramics were a hit at the Mrs. gallery booth Courtesy of Mrs. gallery

For slightly more conventional tastes, the fair’s main aisles offered works by emerging names that appealed to collectors’ eyes and budgets. The Birmingham, Michigan gallery Reyes Projects, founded last year by Marlborough Contemporary alumna Terese Reyes, sold three paintings by the Detroit-based artist James Benjamin Franklin for $8,000, $3,500, and $2,200, respectively. Franklin, who completed his MFA at Michigan’s Cranbrook Academy of Art in 2017, is among a large group of Cranbrook grads choosing to stay put in the Detroit area post-graduation, adding to the buzz around the city’s nascent art scene. International Women’s Day was observed when the Davis Museum of Art at Wellesley, one of the first colleges for women in the US, acquired two works from New York’s Denny Gallery, Drunkard's Path, an embroidered and quilted piece by Amanda Valdez, and a new four-panel painting by Justine Hill called Figure, Ground, Background 2. The dealer Elizabeth Denny told The Art Newspaper: "Knowing that young women will have the opportunity to connect with the work while their in their transformational undergraduate experience is immensely gratifying [to the artists]."

Farah Al Qasimi, a young visual and performing artist presented by Helena Anrather, won the 2018 New York Artadia Award, granting her an unrestricted $5,000. "Al Qasimi’s richly textured, strikingly composed photographs address want, expectation, identity, and global consumer culture, and stood out for their incisive eloquence”, Alexis Lowry, associate curator for the Dia Art Foundation and juror, said in a statement. On Thursday afternoon the artist performed the short, but loud How I Learned to Stop Worrying and Love My Room to a very full room. "Thank you!" she said to the audience sweetly as she ducked offstage.