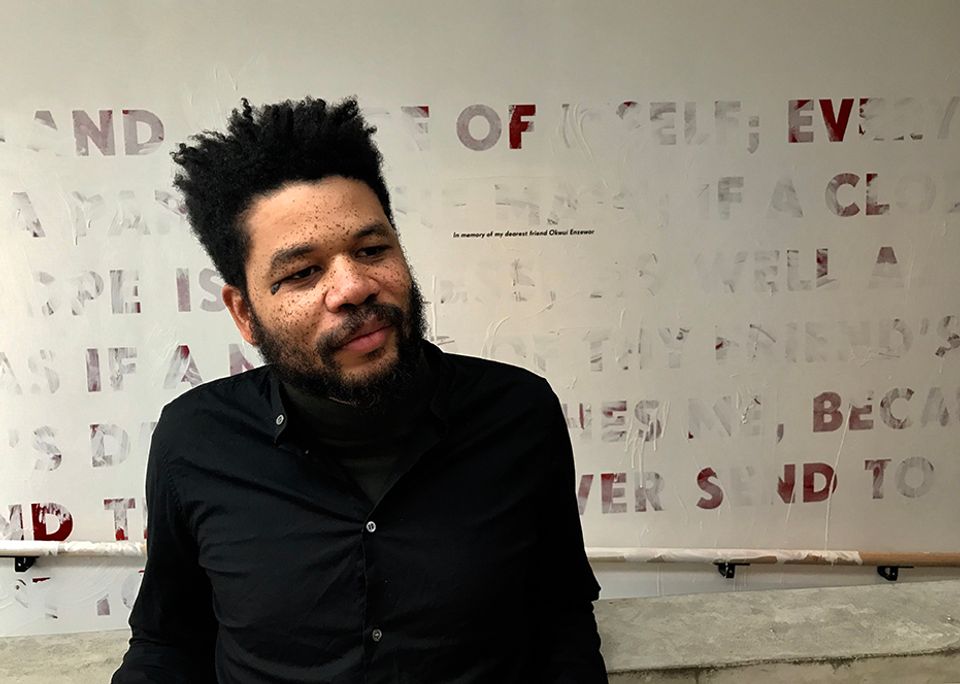 The first work in Violent Amnesia, Oscar Murillo’s Kettle’s Yard exhibition, sets the tone for the rest of the show. It also shares the title. Written across the wall leading down to the galleries, but then partially obliterated beneath vigorously-applied white paint, is John Donne’s Meditation XVII (1624), which famously begins with the much-quoted line: “No Man is an Island, entire of himself”, and ends with the equally immortal: “for whom the bell tolls; it tolls for thee”.

The expressive smothering of these words chimes with the idea of collective forgetting, while at the same time the text resonates with references to remembering and of the humanity that links us all. Of course Murillo is well aware of the appropriation of the 17th-century poet’s words by Camp Remain in the Battle of Brexit: “if a clod be washed away by the sea, Europe is the less”. But here, Murillo also claims the words for himself by overlaying a small text at its centre which dedicates the work to the memory of “my dearest friend Okwui Enwezor”, the great Nigerian curator and writer who died in March this year.

The two became friends when Enwezor invited Murillo to take part in the 2015 Venice Biennale that he curated, resulting in the dramatic row of black and blue oil-impregnated flags-cum-shrouds. “My work is very much in line with Okwui’s ideas—the conversations we had were of the same frequency—every show I do I could dedicate to him,” said Murillo on the preview day at Kettle's Yard last Friday. And certainly in its wider themes of global displacement, migration, the oppression of labour and foregrounding of marginalised histories within a post-colonial, post-industrial world, Murillo’s Kettle's Yard exhibition reflects many of Enwezor’s key concerns. 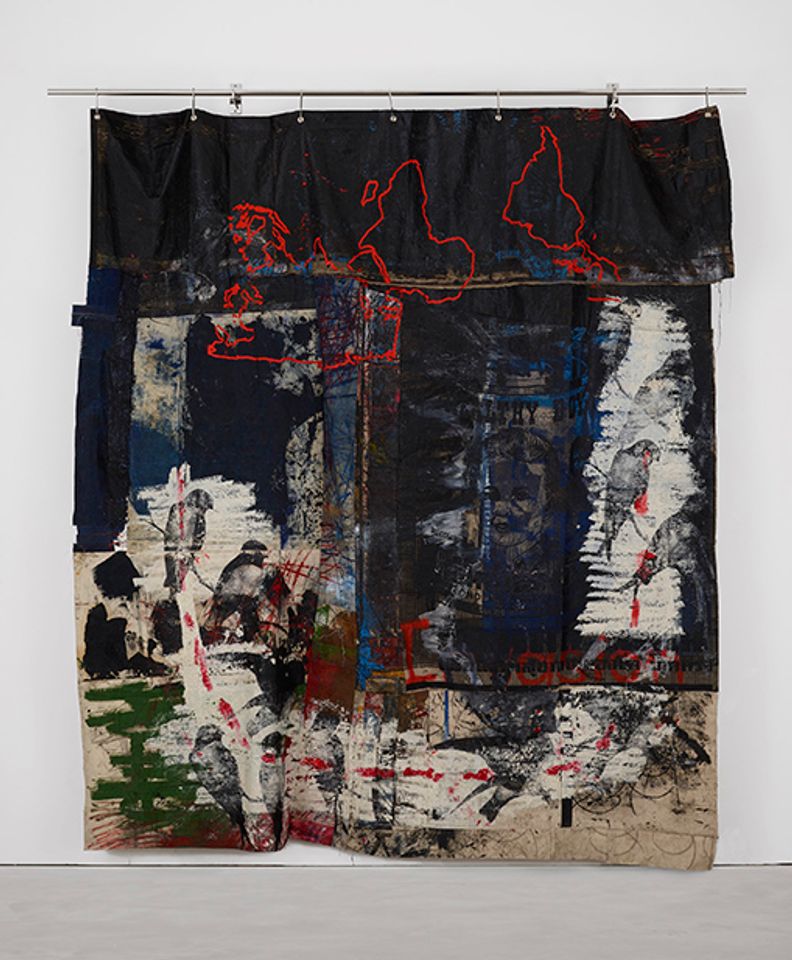 Case in point is the other work in the show that also has the title of Violent Amnesia. A dark intensely layered painting begun in 2014 and finished just last year, it hangs like a flag and depicts a partial world turned upside-down, showing Africa and Asia, but edits out Europe or North America. This is accompanied by images of birds both emerging from and being subsumed within the surface, referencing freedom of movement and its curtailment.

The idea of constant movement and the human cost of our all-consuming global society runs throughout many of the works on show. It is present in the series entitled The Institute of Reconciliation (2014), which includes impassive life-sized papier-mâché figures of workers seated in the ancient adjoining St Peter’s church, their bodies brutally perforated by industrial ventilation pipes. It also resounds in the drawings Murillo makes on aeroplanes as he navigates the global art world, that now hang among the modern British works in the Kettle's Yard house.

Especially moving is the sound-piece relating the experience of Murillo’s father migrating from Colombia to London, which here—in addition to being retold in his native Spanish—has also been translated into the different languages spoken in the surrounding Cambridge communities: Bengali, Arabic, French and English. In the catalogue for Documenta exhibition in 2002, which he curated, Enwezor declared his desire to enable “the full emergence of the margin at the centre”. Throughout Violent Amnesia Murillo keeps his legacy alive by amply achieving this aim.