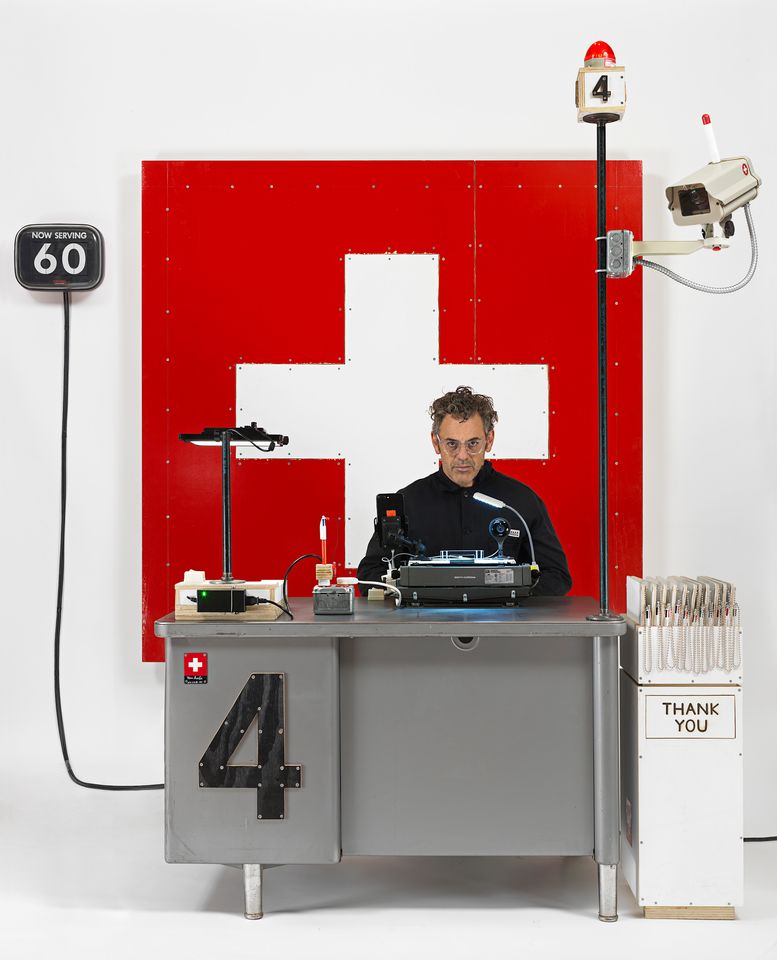 The passport doctor will see you now: Sachs is giving gallery-goers the chance to become Swiss “citizens”—for one day only Genevieve Hanson; © Tom Sachs Studio

As Brexit border chaos looms, Galerie Thaddaeus Ropac is hosting a timely 24-hour performance by the US artist Tom Sachs. Until 6pm on 6 October, the gallery will issue visitors with a personalised facsimile Swiss passport in exchange for a €20 fee. (Sterling will not be accepted.) The one-day-only passport office is Sachs’s response to Brexit, Syria and Donald Trump’s immigration policies and “their challenge to the notion of global citizenship”. Administering passports last night were Ropac himself and the gallery’s senior global director of special projects, Julia Peyton-Jones. But why Swiss? Sachs says it is “the ultimate status nationality, representing wealth, neutrality and freedom”: a status he wishes to make available to all. In our dreams. Damien Hirst’s new HQ may be inspired by the Savoy hotel, but don’t expect any afternoon tea © Gazanfarulla Khan via Creative Commons

Damien Hirst is sparing no expense on his new £40m HQ in the heart of London’s Soho. The bad boy of British art has spent an extra £20m on developing his flagship “studio and art complex” on Beak Street, designed by Stiff + Trevillion architects. The building’s façade incorporates more than 100 bricks glazed with “bespoke iridescent turquoise colouring… carefully cultivated and manufactured in Holland”, a statement says. Inspired by the five-star Savoy hotel, the luxurious bathrooms are finished in Carrara marble, with uber-chic suites and walk-in showers. The cathedral-like space will be used for “producing and showcasing artwork”, says the brief. The (multi-)million-pound question: will the studio double as a gallery for Damo’s latest masterworks?

Goldie gets his teeth into Arts Club The legendary DJ Goldie shook things up in Mayfair earlier this week at the Arts Club’s banging Frieze party. Never mind that the support act, the youthful South African rapper Riky Rick, cheekily addressed him as “Old G”, and that the volume was turned down to placate the neighbours. The king of drum’n’bass still flashed his gilded gnashers and got the dancefloor heaving, with movers including the artistic director of the English National Ballet, Tamara Rojo, the fashion designer Ozwald Boateng and the artists Haroon Mirza and Conrad Shawcross. Special mention goes to Nicholas Cullinan, the director of the National Portrait Gallery and the curator of its Michael Jackson: On the Wall show, who revealed a repertoire that goes way beyond the moonwalk Cullinan has showed off before.

A river runs through Frieze Masters Hats off to Dickinson Gallery, which has left no stone unturned in its faithful re-creation of Barbara Hepworth’s sculpture garden in St Ives, Cornwall, for its stand at Frieze Masters. Hepworth’s massive bronze River Form (cast in 1973) takes pride of place on a glistening pool surrounded by glossy shrubbery. But the crowning glory is a pair of head-turning stuffed seagulls. “The birds are not for sale—although they wouldn’t look out of place in a Maurizio Cattelan installation,” one gallery assistant quipped. Green-minded as well as green-fingered, Dickinson will donate all the plants from the presentation to Herriot Hospice Homecare in north Yorkshire.