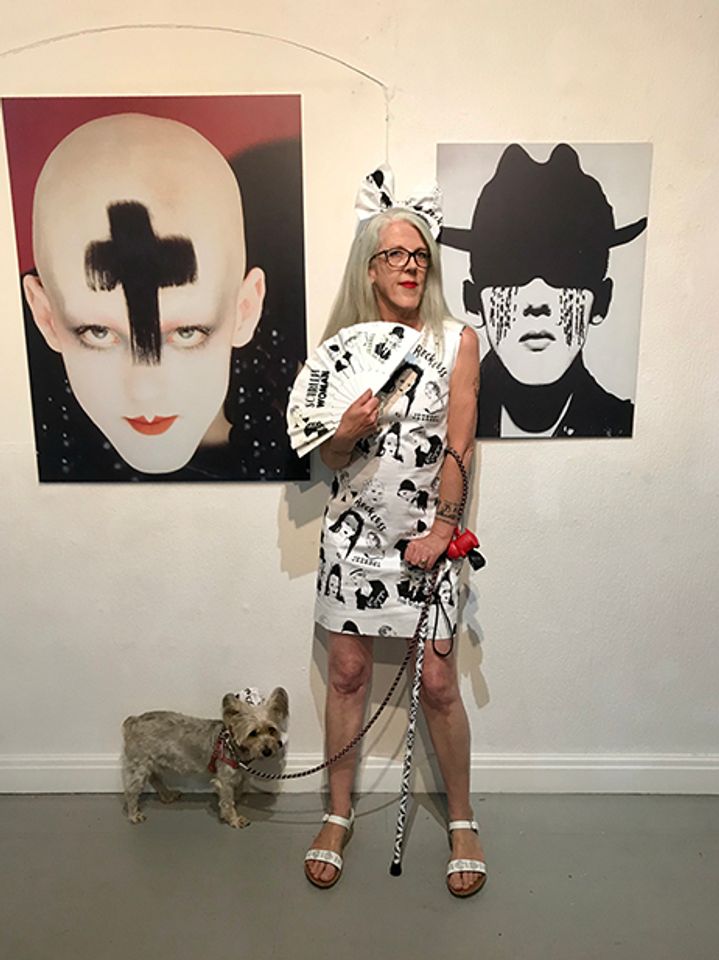 Once seen, never forgotten—Scarlett Cannon was one of the key faces of the 1980s when youthful London was a city sharply divided. One one side, the moneyed mobs of yuppies and Hooray Henrys. On the other, the more straitened but super-stylish creative tribes who were inspired by the legacy of punk to revolutionise the worlds of art, fashion, music and magazine publishing. Scarlett firmly inhabited the latter camp, whose stunning and frequently gender-bending style was given full throttle in their club-haunts—Billies, Blitz, Heaven, CHA CHA, the WAG and Taboo—as well as across the pages of Face, i-D and BLITZ.

With her cropped white-blonde coif and strikingly unconventional looks, Scarlett was a model and muse to many. She was repeatedly sculpted by Andrew Logan and bedecked with his shattered mirror jewellery, painted expressionistically by the Polish-born Feliks Topolski and captured in precise acrylics by Luciana Martinez. Her face has been photographed by Nick Knight, Judy Blame, Robyn Beeche and Mark Lebon, to name but a few. Now all her above incarnations, as well many more, have been brought together in the exhibition Scarlett Woman at The Gallery Liverpool (until September 15). This most excellent establishment is run by Martin Green and James Lawler who for the past few years have specialised in putting on shows that celebrate figures deserving of more attention.These include Scarlett compadres such as Andrew Logan, Duggie Fields and Pam Hogg.

The exhibition has been organised in collaboration with Iain R Webb, now a professor of art and design at Kingston School of Art, and who as a former fashion editor of BLITZ between 1982-7 was firmly embedded in the scene. At the opening party, Webb, Pam Hogg and Boy George were among the strikingly-clad multigenerational throng who turned out in force to pay homage to Scarlett. And she didn’t disappoint. At the private view she was resplendent in a mini dress and Minnie Mouse hair bow emblazoned with the work of her longstanding friend the artist Donald Urquhart, who had also made a matching hat for Scarlett’s constant canine companion Maude. Printed onto both dress and accessories as well as onto Urquhart’s necktie were some of his 21 images of Scarlett in the role of various screen legends—Bette Davis, Jean Harlow and Barbara Stanwyck—as well as those of her just being herself, all of which also cover an entire gallery wall and were made earlier this year.

Urquhart’s new series join a dramatic oil portrait by Sadie Lee as Scarlett's recent immortalisations, along with several portraits by George O’Dowd, aka Boy George, who at the opening praised the uniqueness of what he described as her “Ming Dynasty” looks. Another more sinister image of Scarlett finds her eyes blacked out with dark shades and rocking an all-black billowing silk coat on the runway for designer Gareth Pugh’s Autumn Winter 2017 collection, there’s even a vampish Scarlett Dolly made last year by Julian Kalinowski. These contemporary portrayals of Scarlett are as memorable as those made nearly four-decades-ago. Not only do they prevent Scarlett Woman from becoming an exercise in nostalgia, but they confirm that she is able to transcend the times for which she is best known and continues to be one of the few figures for whom the now-overused term ‘iconic’ still remains apt.