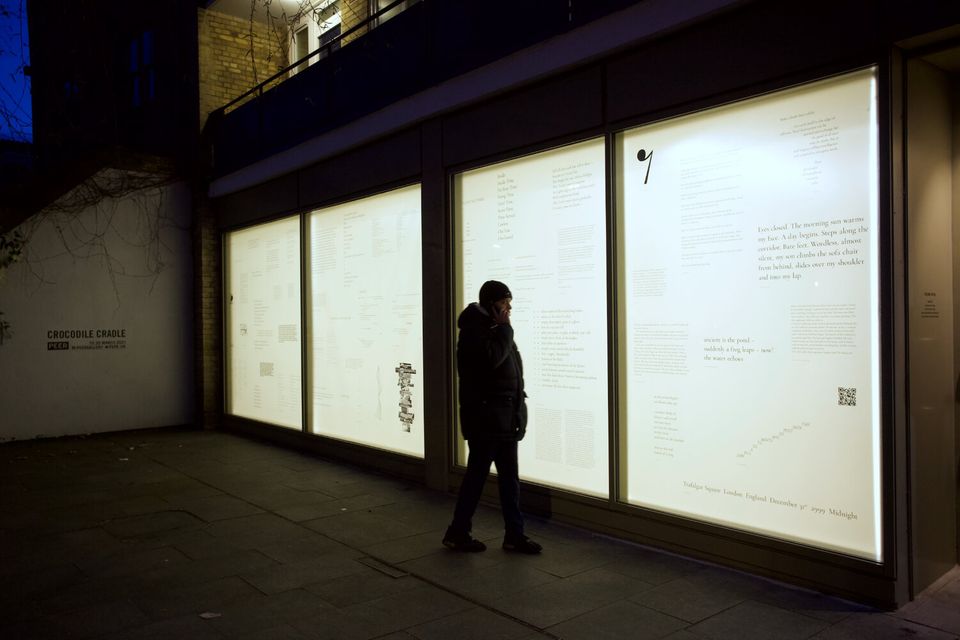 In the UK we still can’t enter galleries, but by gazing through their windows during our permitted exercise walks we can occasionally steal glimpses of shuttered shows. Now three exhibitions currently on view in London have embraced this sorry situation by making special provisions for alfresco street viewing by offering extra aural and visual elements to enhance the socially distanced art experience.

Crocodile Cradle at PEER in Hoxton takes three forms: a collage of artist’s texts applied directly onto the glass façade of the gallery (until 20 March); a filmed performance accessible either online or using a QR code and a book to be published this summer. "I have always been interested in the possibilities of different exhibition structures,” says the show’s curator, Simon Moretti, whose work also features in the exhibition alongside that of 51 of other artists, including Fiona Banner (AKA the Vanity Press), Liam Gillick, Sylvie Fleury, Lubaina Himid, Christian Marclay and Cerith Wyn Evans. All were asked to contribute a piece of text of no more than 200 words that they had either written or found. “The pandemic, Brexit, Black Lives Matter, the environmental crisis, it was such a charged political moment for artists to say what they felt at this time,” Moretti says. “I like the idea for all of us to be connected through a single work,” he adds. 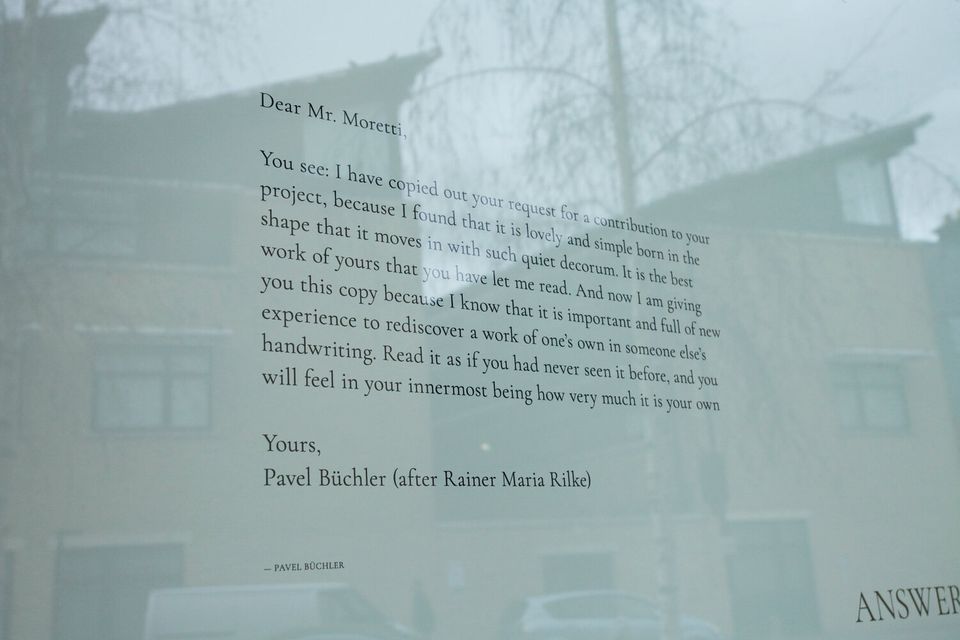 These responses float across PEER’s street frontage in a variety of fonts and formats, ranging from Dan Perjovschi’s single scrawled pictogram, FEAR to Tacita Dean’s quote from Andrew Marvell: “Society is all but rude to this delicious solitude”, and Ugo Rondinone’s neatly hand printed poem-proposal that suggests, “let’s skip the 21st century completely”. The artist’s words have also been brought to life in a 38 minute single-take reading performed by the actor Alastair MacKenzie, and recorded on his iPhone, which can be accessed via a QR code on the gallery window or online. Later this year Crocodile Cradle will assume its final incarnation in a book co-published by PEER and launched with a live performance by MacKenzie once we are all permitted to occupy the same room again. 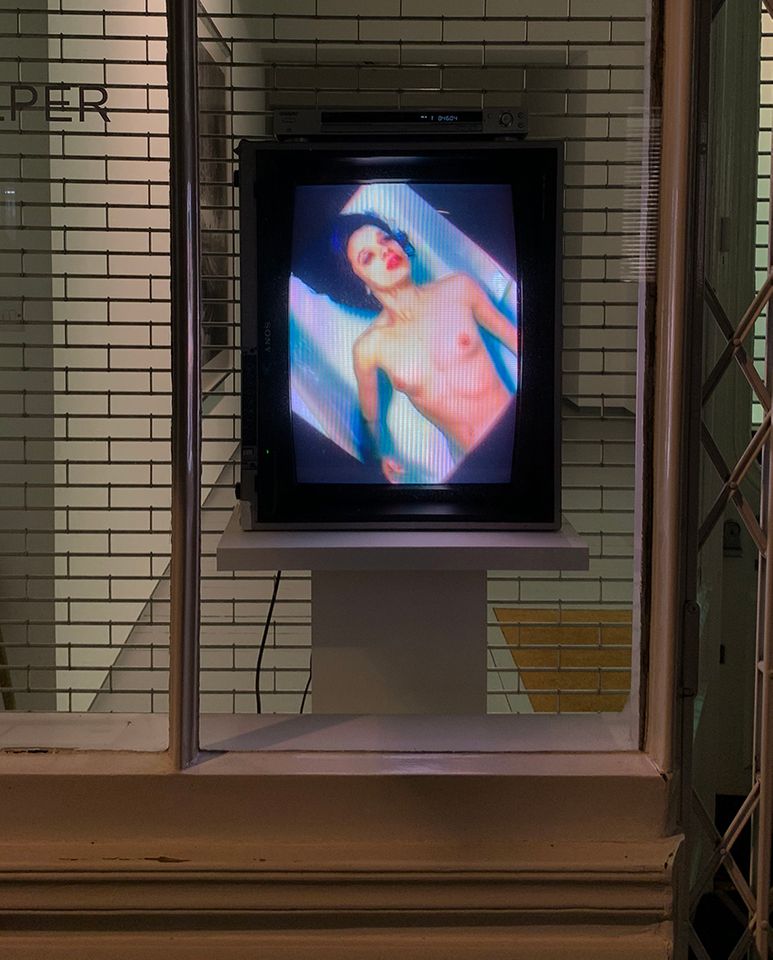 In the window of Paul Stolper’s gallery in Holborn, a television monitor lying on its side beams out into the street Brian Eno’s classic 1984 video work Thursday Afternoon (until 15 March). A series of seven looped “video paintings” filmed in San Francisco in 1984, it features Eno’s friend the actress and photographer Christine Alicino and is shot in vertical format (hence the upended monitor) and uses speed alterations, distortions and processing effects for maximum impressionistic painterly effect. Given that Eno always intended Thursday Afternoon to be looked at in passing, it’s an appropriate choice to be viewed from the street. At the time he described it as a “steady-state, image-based work which one can look at and walk away from as one would a painting: it sits still and you move.” But to keep visitors in their place for a bit longer, a QR code provided by Paul Stolper gallery means that the work can now be watched while listening to Eno’s atmospheric ambient Thursday Afternoon sound track—which he rearranged a year later to become his 11th solo album of the same name. 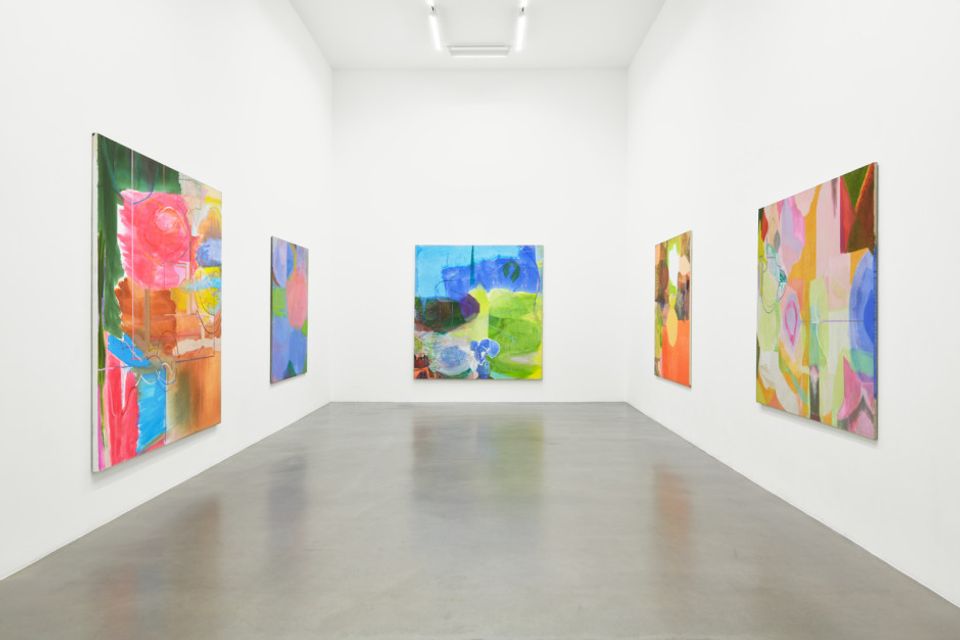 Music also feeds into Victoria Morton’s exhibition of large vividly coloured abstract paintings, which are clearly visible through the shopfront windows of Sadie Coles HQ's Davies Street gallery in Mayfair (until 28 Feb). The title of the show is Pedal Point, a technical musical term that refers to a sustained note over which both harmony and dissonance can evolve. It also attests to Morton’s long standing interest in making music as well as art. She’s an active member of Glasgow’s overlapping art and music scenes, and until 2014 was a member of the post-punk all female band, Muscles of Joy.

Although Morton insists that the primary subject of her paintings is always painting itself, for this exhibition she has combined both the aural and visual strands of her creative activity by making three short films, each devoted to a separate painting in the show and accompanied by a specially composed piece of music inspired by the work. These are viewable on Sadie Coles HQ's gallery web site, under the collective title of Pedal Point Notes and in the HOMEWORK section, a platform devoted to artist’s lockdown projects. 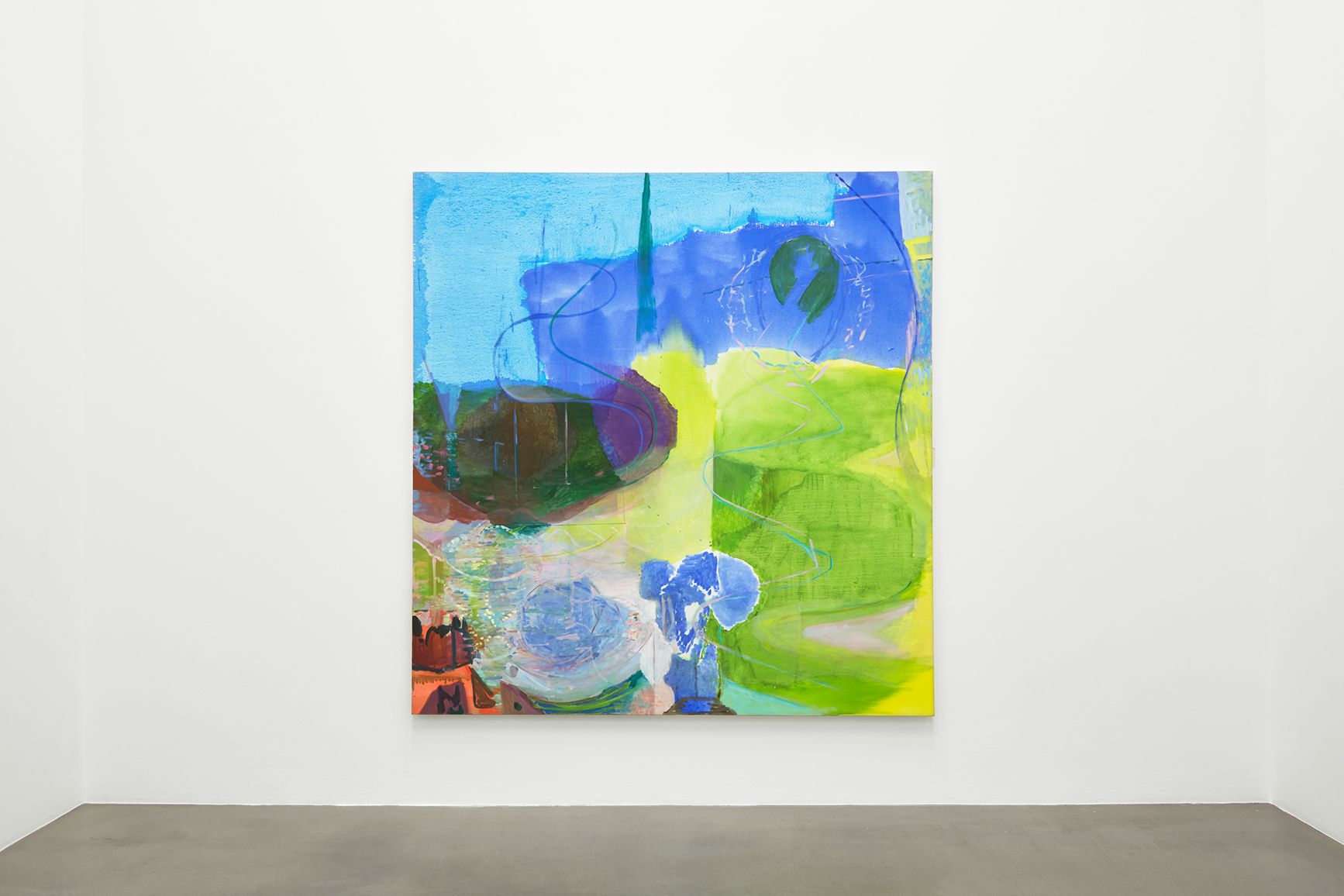 Morton doesn’t regard these films as artworks in their own right but as a means to have a more intimate, close-up experience with her shuttered exhibition which, running through the lockdown month of February, was only ever going to be seen from afar. “I wanted to give people the chance to get sucked into the space of the painting, to offer something quite immersive and hypnotic,” she says.

Each film is named after the work it responds to and offers a very distinct atmosphere in which variously filmed sequences of painterly details are set to range of electronic, instrumental and ambient sounds. In Pedal Point the mood is elegiac, with floating riffs of trumpet and fragments of footsteps and snatched voices accompanying pools, stains and patches of colour. La Danse lives up to its name as slices and blocks of hot cerise and turquoise as well as more sombre portions of painting slide back and forth, advancing and retreating to a trancey electro-rhythmic soundtrack. And in the liquid, fluid Serpents, rising and falling surges of piano swell and ripple around layered veils and gauzy mists of paint. At times it seems like being submerged underwater, or watching a storm advance.

Of course nothing can substitute a direct physical encounter with the works themselves, but these films offer a refreshing alternative to the usual online viewings and propose a different way in which to read the paintings. Overall, the imaginative presentation of all three exhibitions is a testament to the determination of artists and their galleries to extract the maximum benefit out of a deeply unsatisfactory situation and find creative ways to alleviate the art-starved lockdown experience.