New works by Thomas J. Price and Larry Achiampong on The Line extend the debate on public sculpture 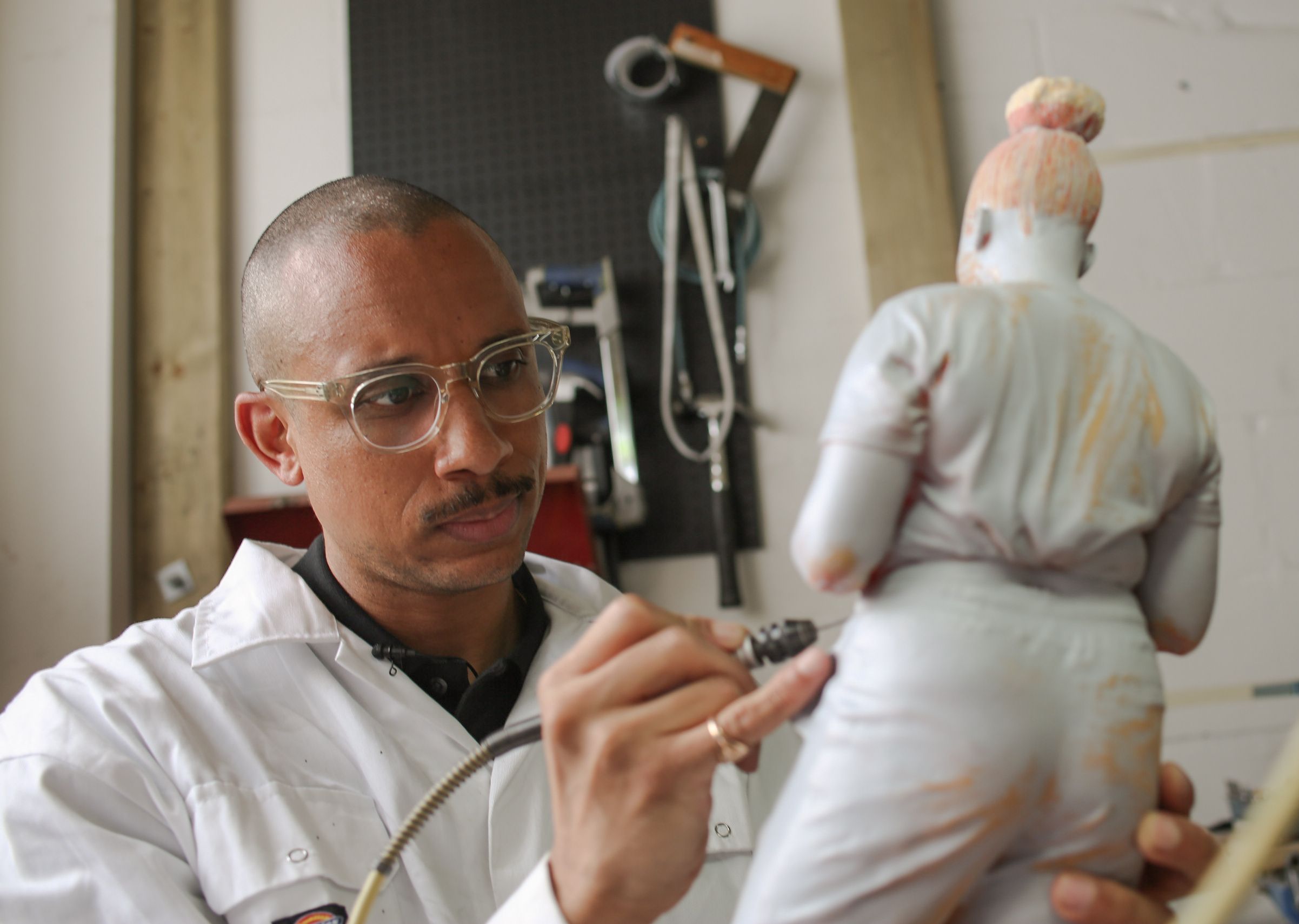 Thomas J. Price works on a model for his new sculpture for The Line Photo: Adam Kaleta

In this summer of social distancing and increasingly stringent indoor mask-wearing, what better way to experience contemporary art than along a three mile riverside sculpture trail? The Line, which is celebrating its fifth anniversary with a series of new commissioned projects, propels walkers through East London’s natural and industrial landscapes as it follows the Greenwich Meridian Line through East London’s natural and industrial landscapes, linking the Queen Elizabeth Olympic Park in Stratford, down to the O2 in Greenwich. Now London’s first dedicated art walk is on the cusp of ushering in a new phase that both celebrates its past track record as well as looking to a more collaborative future that challenges and confirms the role of public sculpture.

The brainchild of the young art dealer Megan Piper and the late urban regeneration specialist Clive Dutton, The Line opened in 2015 with a changing exhibition programme of works borrowed from the vaults of both private and public collections. These included an original lineup of pieces by Damien Hirst, Bill Viola and Eduardo Paolozzi , as well as younger artists such as Thomas J. Price; with sculpture by Gary Hume, Laura Ford and Joanna Rajowoska among the loaned works currently in situ. Alongside this changing lineup are pre-existing, permanently sited works such as Antony Gormley’s monumental Quantum Cloud and Richard Wilson’s chunk of sand dredger, both installed by the O2, as well as the unholy alliance of Anish Kapoor and Karsten Holler in the ArcelorMittal Orbit that forms The Line’s finale—or starting point—in London's Olympic Park.

When The Line first opened, Piper declared her desire “to shine a light on the extraordinary world class work that is hidden from public view and to bring the inside out”, describing the project as “a walk, not a park—a dynamic exhibition that’s about linking places and people in a part of London that doesn't have the museums and galleries afforded to other parts of town.”

As it prepares to mark its fifth birthday, The Line finds itself in a radically different world. In addition to the arrival of Covid-19, public sculpture has become a lightning rod for Black Lives Matter protests across the US, the UK and Europe as the abominable subjects of so many historical monuments are laid bare and their removal demanded. At the same time, the glaring inequalities and injustices that permeate every part of the contemporary art world have also been put under scrutiny. As Marc Quinn’s recent intervention in Bristol confirmed, the realm of public art continues to be an enduring bastion of pale, male entitlement; yet this is something The Line has attempted to redress right from the start, when Thomas J. Price’s Network, a nine-foot bronze of a young black man gazing at his telephone, was part of its inaugural lineup.

Price’s work is now back on The Line as part of a special anniversary programme   of specially commissioned works to be shown alongside the existing loaned pieces. On 7 August, the artist unveils Reaching Out, a new monumental bronze, also around nine feet high, this time of a young woman who will be cradling her phone in almost exactly the same location as her male predecessor, near the historic Three Mills by Bow Creek. “Tom has been part of our story from the very beginning,” Piper says, “and we are so pleased to have him back with a new piece made especially for The Line.”

The work was made earlier this year and Price comments that his informally dressed subject, who is created from an amalgam of photographs, scans and earlier works “is not the visual acceptance in the mind of a white man of what a black woman should look like, or what power should look like. I want everyone to be able to identify her, it’s about drawing people to the sculpture so they can feel the humanity of this character". Despite the monumental size of the statue, “I tried to make it so that she’s actually slightly vulnerable," Price says, "because in this vulnerablity and openness, in this sort of naturalism, she has a real power.”

Covid-19 has curtailed The Line’s full anniversary programme, with new site specific pieces from Anne Hardy and Rana Begum and a series of billboards and window vinyls celebrating the work of the Newham-based Spiritualist painter Madge Gill, all slated for installation early next year. However, this August bank holiday weekend will also see the inauguration of another anniversary commission: an important new audio piece by Larry Achiampong made especially for The Emirates Air Line, the cable car that stretches across the Thames linking the Greenwich Peninsula to the Royal Docks on the north bank. 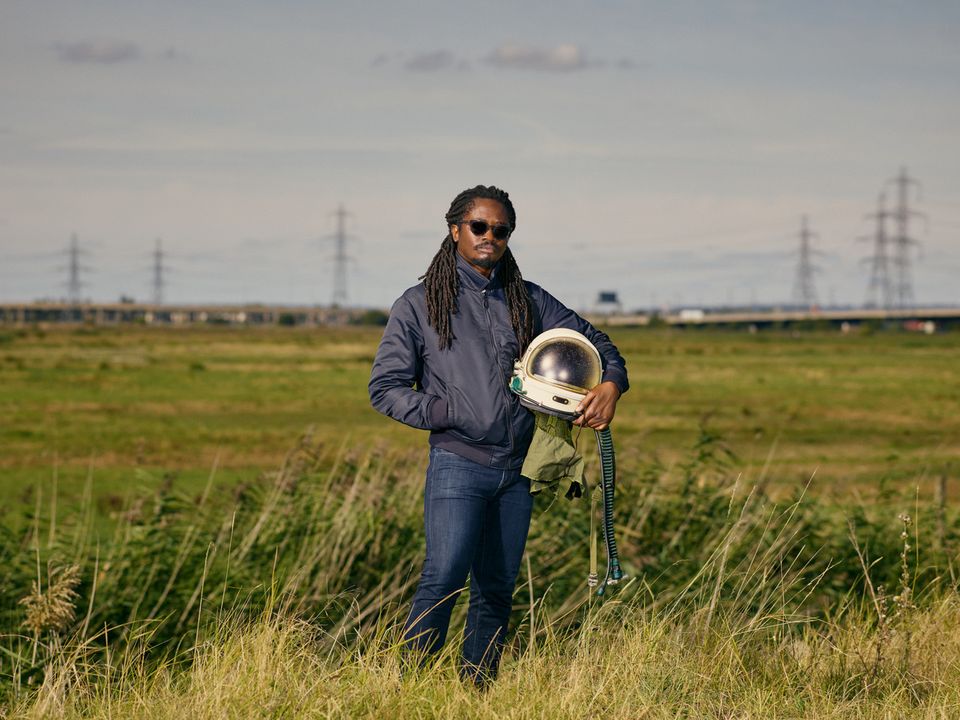 Titled Sanko-time after the Ashanti phrase "Sankofa", meaning to go back and retrieve, the work combines audio recorded both in the UK and Ghana, input from local London primary school children and a monologue written and performed by the artist. “It talks about a personal journey, but hopefully from a perspective that allows people access,” says Achiampong, whose parents came from Kumasi Ashtown in Ghana to settle in the UK in the early 1980s. He observes that “the Royal Docks are a celebrated global centre of innovation and industry and yet there’s still the sting of colonialism in the water”, and the artist hopes that his audience might “even consider themselves as the voice that is talking about the reverberations of the horrors of slavery, the discussion of Empire and the relationship with the Meridian.”

The work consists of two ten-minute tracks, one for each journey across on the cable car, which can be downloaded to mobile devices by activating a QR code at the entrance to the Emirates station or the individual cable cars. While Achiampong feels that the best experience of the piece will be “on the cable car moving through the air and across the water”, he says that he also likes the fact that, once downloaded, it can be experienced everywhere and “potentially becomes more of an ongoing conversation”.

Achiampong works in many media—his recent Art on the Underground commission for Westminster station replaced the classic roundel tube logo with colours and patterns from the Pan African flag—but he’s especially happy with how his sound work for The Line pushes at the notion of what a public artwork can be. “I’m really excited about how it can travel and be shared and become part of a conversation with other people” he says. “You don't perhaps experience as many audio art works as sculpture or paintings yet audio is one of the most consumed aspects of media and to bring an artistic process and critical conversation to that has been really exciting for me.”

These projects by Price and Achiampong, along with the other commissions which have now been pushed back to early next year, not only celebrate the first five years of The Line but also usher in a new phase of collaborations and commissions that aim to build on its track record of opening up and democratizing public sculpture. “The Line launched with a loans programme of monumental sculptures, which will now be complemented by site-specific projects involving a wider range of media, including sound, film and performance,” says Piper. “We will also place greater emphasis on health and wellbeing and the benefits of being outdoors and think creatively about how we can use public space in different ways.”

Both Price and Achiampong are happy to be helping The Line mark this turning point. “I think Megan has done a fantastic job” says Price. “She appreciates good sculpture that is not made by committee but starts with the quality and the integrity of the work. Now she’s helping more artists to recognize their practice in the public realm.” Achiampong especially hopes that his work Sanko-time “might inspire young black people”, stating: “ I imagine how a younger self might have experienced that work? At that age I’d never experienced anything like that. There are so many young black artists out there who aren’t being given the space to contribute to these important conversations. It feels really special to be a part of something that is trying to redress that.”