From Siah Armajani on democracy and exile, to Michelle Handelman's look at otherness 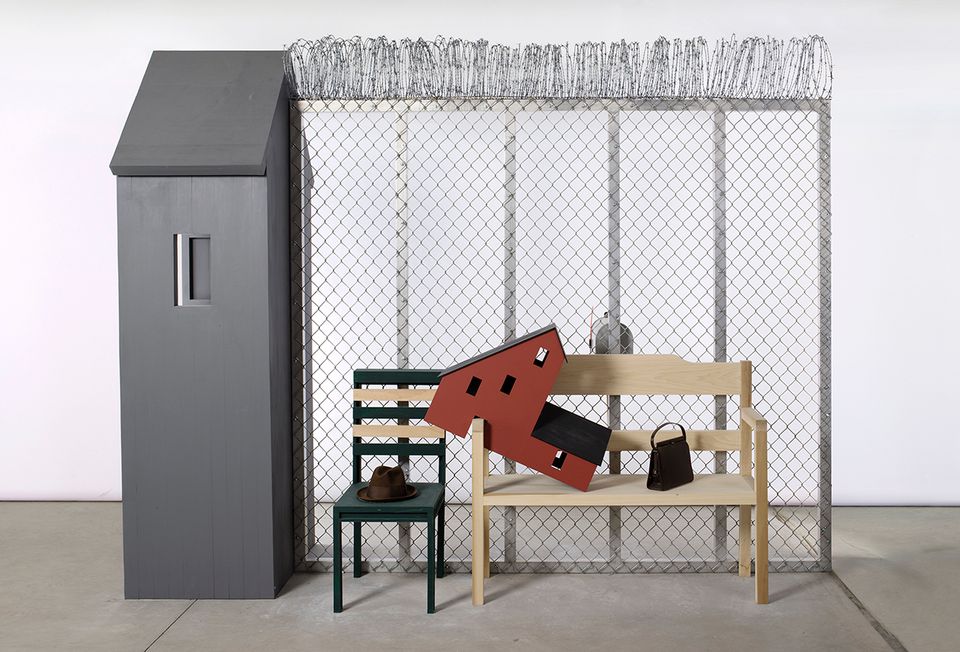 Siah Armajani, Seven Rooms of Hospitality: Room for Deportees (2017) Courtesy of the artist and Rossi & Rossi

It seems like an ideal moment for Siah Armajani: Follow This Line at the Met Breuer (until 2 June), the first major US retrospective of the Iran-born artist, who came to the US in 1960 as a young student to escape political persecution and deals with themes like exile and democracy in his work. It does justice to his decades-long career, with a range of objects from the mixed-media works he made in Tehran in the 1950s, like Shirt #1 (1958), inscribed with spells, poems and school exercises, to architectural maquettes in the Dictionary for Building series, to the Sacco and Vanzetti Reading Room #3 (1988), an angular space that references both Soviet Constructivist and American vernacular architecture (and the anarchist immigrant brothers executed for murder). One standout—and extremely timely—recent piece is Seven Rooms of Hospitality: Room for Deportees (2017), a large-scale installation that includes a barbed-wire fence ad is part of a series that looks at “aspects of migration and immigration”, the artist says.

It would be “unthinkable to have a retrospective [on Siah Armajani] without having his [outdoor] public work”, a major part of his practice, says Nicholas Baume, the director and chief curator of the Public Art Fund, which has re-created one of the artists best-known projects, the delightful Bridge Over Tree, at Brooklyn Bridge Park. “That piece always evoked excitement, smiles, happiness,” Armajani says of its original presentation at the Walker Art Center in Minneapolis in 1970. Though the work, a nonsensical covered bridge with a sharp rise over one little tree, was inspired by Heidegger’s notions of “location” and “neighbourhood”, the experience of climbing its steep steps is one of simple joy. There is something magical, almost meditative, about it, and it is fun to see children enjoying it so much. It is also the perfect setting, playing off of the nearby Brooklyn Bridge, and can charm even jaded and cranky New York commuters spotting it from trains crossing the Manhattan Bridge.

Toeing the line between political manifesto and camp opera, the video artist Michelle Handelman’s Lover Hater Cunty Intellectual (until 26 May) offers a daring and dramatic inquiry into femininity and otherness as a wellspring of power. On view at the downtown gallery Signs and Symbols, the multimedia installation transforms the space with dark, post-apocalyptic wallpaper bearing images of burning cars overlaid with text reading in big, bold letters: “You have no idea how weak I am”. The centrepiece is a video in which the Latinx performance artist and activist Viva Ruiz despairs, dances and lectures, proclaiming: “My identity is a revolving door of possibilities” and “I want everything because queerness is a borderless state”, all set against a vibratory lo-fi goth soundtrack. The work is an outgrowth of Handelman’s larger project Hustlers & Empires, commissioned by the San Francisco Museum of Modern Art last year, which explores how resistance to oppression can shape identity.