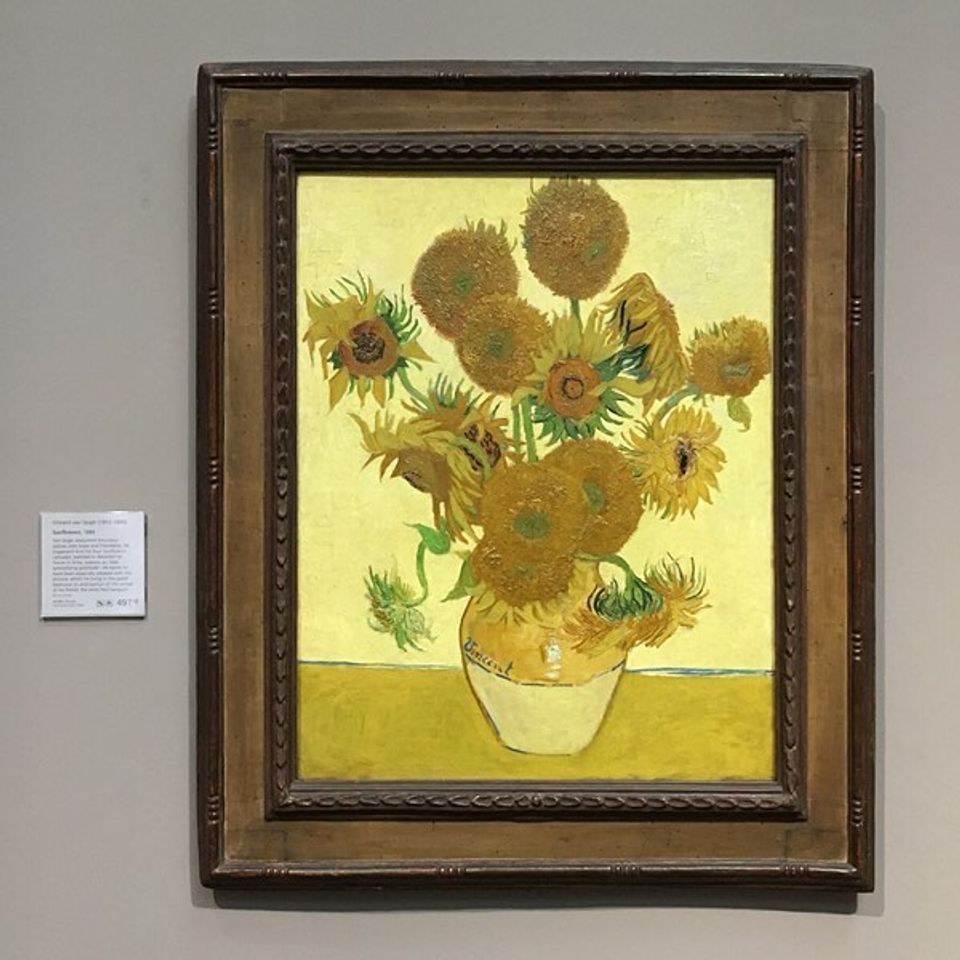 When the National Gallery tried to buy the Sunflowers in 1923 Jo Bonger, the artist’s sister-in-law, resisted, saying “I could not bear to separate from the picture I had looked on every day for more than thirty years”. But in the end the National Gallery’s request proved irresistible, since “no picture would represent Vincent in your famous gallery in a more worthy manner”. The price paid was £1,304.

For 2020, the Japanese will be paying a fee to borrow Sunflowers and the other National Gallery works, thanks to sponsorship from the Yomiuri Shimbun, one of the largest Japanese media companies. At a wild guess the fee for the Van Gogh loan alone might involve adding three more zeros to the 1923 purchase price, although the actual figure is a closely-guarded commercial secret. All this is for an artist who was unable to sell his work.

When the Sunflowers arrived in London 1923 it went to what is now Tate Britain, but was then the National Gallery’s extension in Millbank for British and Modern European art. It remained there until 1939, when the Van Gogh was evacuated during the war to Muncaster Castle, a country house in the Lake District. In 1961, the Sunflowers was moved from Millbank to Trafalgar Square on its transfer from Tate to the National Gallery.

Since 1923 the Sunflowers has only been very rarely sent away on loan. In 1948, after Tate’s last Van Gogh retrospective, it went to two further venues, Birmingham and Glasgow, and in 1968-69 to London’s Hayward Gallery. There have been only three loans abroad, to Paris in 1955 and the Van Gogh Museum in Amsterdam, in 2002 and 2013.

The Sunflowers will also shortly be displayed in the Van Gogh and Britain exhibition, opening at Tate Britain on 27 March. Although this is only just down the road from the National Gallery, the painting is to be presented in a fresh context. At Tate it will be part of the story of how Van Gogh had an important impact on British 20th-century art, particularly with his Sunflowers still life.

Similarly with Japan, there is an appropriate link, since Van Gogh loved Japanese prints in the late 1880s, and they had a major influence on his paintings, especially in terms of composition and the use of colour. Van Gogh, in turn, would become popular in avant-garde circles in Japan at an early stage, soon after the First World War. There were more colour reproductions of Van Gogh’s paintings published in Japanese books and periodicals by the early 1930s than in Europe and North America.

In 1987 another version of the Sunflowers—a copy done by Van Gogh a few months after the London original—was sold at Christie’s for £25m. Bought by the Yasuda insurance firm, it is now owned by their successor Sompo, and the painting is in a museum in the company’s Tokyo headquarters. In 2020, the year of the Tokyo Olympics, these two versions of Sunflowers will therefore both be on view in the Japanese capital.

In Tokyo and Osaka the National Gallery’s Sunflowers is likely to be seen by around a million people in the six months or so of the 2020 exhibitions. That may seem a huge number, although probably a similar number normally enjoy the painting when it hangs in London.

Christopher Riopelle, the National Gallery’s curator of 19th-century paintings, said six years ago that the Sunflowers would only be lent “for the most compelling reasons”. Until now this has meant very occasional loans to a particularly relevant UK exhibition and the Van Gogh Museum, the artist’s “home”. But with falling government grants (in real terms) and growing ambitions, financial pressures have now become compelling. The National Gallery spokesman has also promised that the fee will be partly used for “sharing our pictures with audiences in the UK”.

In other Sunflowers news

The Van Gogh Museum in Amsterdam today (11 January) announced that its own version of the Sunflowers has been temporarily removed to the conservation studio.It owns one of the three versions of the yellow sunflowers, a copy of the August 1888 London Sunflowers, done with Paul Gauguin in mind, and painted in January 1889.

A museum statement says that “the final phase of comprehensive research into the condition of the work will be completed”. The painting will then “be restored in order to ensure that it is preserved for future generations in the best possible manner”. The restoration will be relatively simple and will be done just after the further research. The museum says that the Sunflowers will be back on display on 22 February.

CORRECTION: The National Gallery version of the Sunflowers was lent abroad three times, not twice as stated in their press material. It was also lent to the Orangerie in Paris in 1955.