Unseen for 25 years, they all come from a very private American collector

Although not yet announced, Sotheby’s will have four works by Van Gogh at its London evening auction on 4 February. All come from the same source and none have been seen since they were briefly displayed at New York’s Avanti Galleries in 1995. This was one of the very rare post-war Van Gogh exhibitions mounted by a dealer.

The Sotheby’s works have been consigned by an unnamed US owner, who is very discreet. It is unusual for a private individual to have as many as four works by Van Gogh—and there are probably only a handful of US collectors in this league.

All four of the pieces at Sotheby’s are early works, done while the artist was living in The Hague (1881-3) and later with his parents in the Brabant village of Nuenen (1883-85). His models were ordinary people and his style was then hesitant and crudely expressionist. These Dutch paintings and drawings do not fetch the huge sums of his later exuberant French works, with their vibrant colours. One of Van Gogh’s favourite models was Adrianus Zuyderland, an elderly resident of an almshouse in The Hague. In the Netherlands they were known as “orphan men”. Orphan Man (1882) depicts Zuyderland in profile, with his distinctive wide head and thick white side-whiskers. He wears his almshouse cap and thick overcoat on an autumnal day. The Sotheby’s estimate is £400,000-£500,000. (In 2016 another drawing of Zuyderland kneeling at prayer soared above its £300,000-£500,000 estimate at Sotheby’s, selling for £1.1m.) Another of the drawings is sometimes thought to depict a carpenter from the workshop which lay just beneath the modest apartment that Van Gogh shared with the former prostitute Sien and her two children. However, Sotheby’s identifies the gaunt-faced man as a blacksmith, because of the type of hammer he holds and his heavy leather apron. In The Hague Van Gogh knew a blacksmith, who helped make a perspective frame, and he possibly could have been the model. The drawing is estimated at £450,000-£550,000. 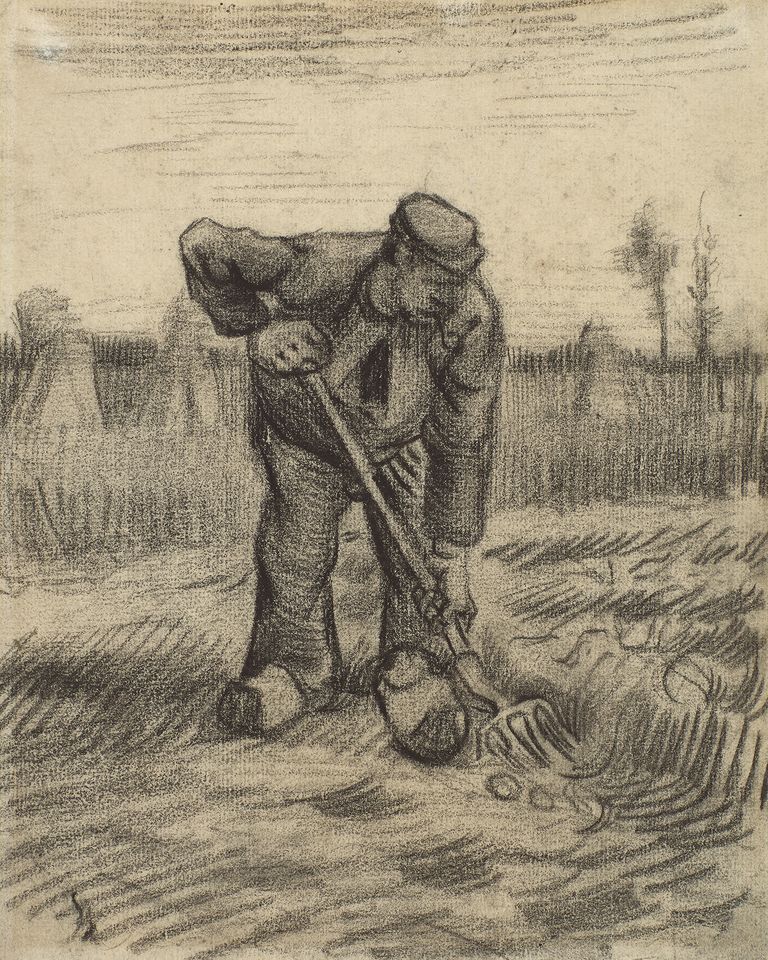 The third drawing, made with strong strokes of black chalk, was done in the fields of Nuenen, where Van Gogh eventually moved after his break-up with Sien. Peasant digging up Potatoes (1885) depicts a labourer with a pipe, working in a field with a couple of potatoes near his fork. Conical stacks of wheat lie in the background. The work is estimated at £450,000-£550,000. The final work coming up at Sotheby’s is a painting, depicting a woman resting in a cottage, done in the characteristic dark tones of Van Gogh’s Dutch period. Peasant Woman Seated (1885) shows the sitter absorbed in her own thoughts. Her hands are overly large, emphasising that she is a manual worker, but her head is strangely thin. The estimate is £900,000-£1.2m. Similar figures appear in Van Gogh’s first masterpiece, The Potato Eaters (1885), painted a few months earlier.

All four of the Sotheby’s works are likely to appeal to connoisseurs, rather than those wanting a trophy Van Gogh from the artist’s later period in France (1886-90). Van Gogh’s French paintings generally sell for well over £10m—and often for a great deal more.

The Van Gogh works will be displayed at Sotheby’s from 29 January to 4 February.