Why the Met’s Delacroix show seems both glorious—and irrelevant 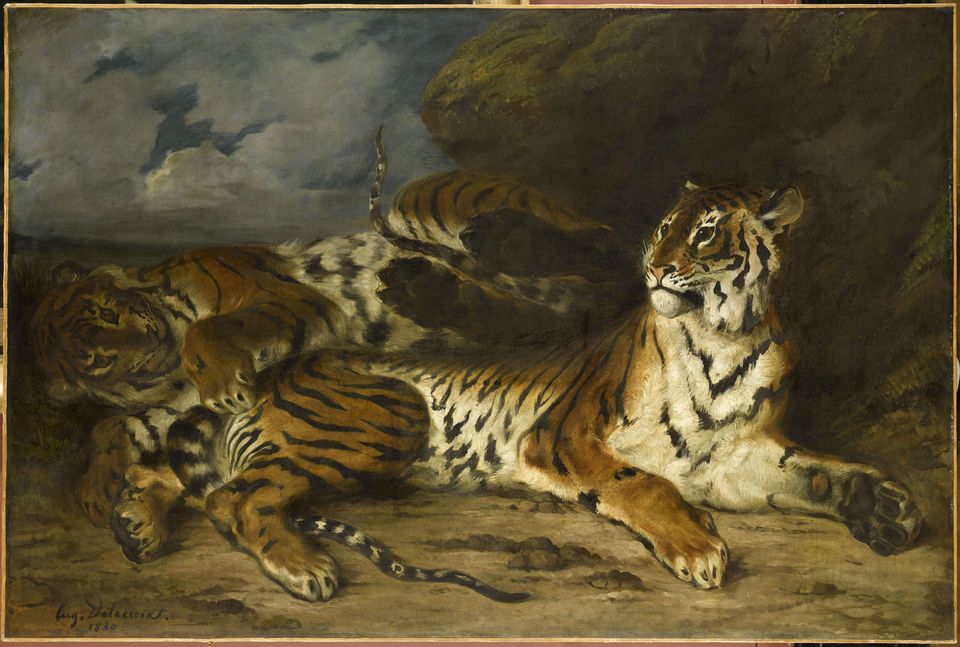 A painting that could have been left out: Young Tiger Playing with Its Mother (1830) Photo courtesy Musée du Louvre, RF1943

First, please know that I consider myself lucky to live within striking distance of The Metropolitan Museum of Art. It’s always a pleasure to be there. Always. The collections in every department are a blessing, encyclopaedic and magnificent, deeply researched, with room to move all around. I didn’t care for the overly reverent installation of the Costume Institute’s recent show of fashion inspired by Catholicism, but such lapses tend to be few and far between.

Then there’s Delacroix. This supposed blockbuster exhibition was largely imported from the Louvre, where it belongs. At the Met, where it sits within a context spanning several millennia, it looks glorious but also irrelevant. “It’s staggering,” countered the curator Asher Miller, on my way into a press preview. “But not what you’d expect.”

Personally, I loved the low lighting and the deep hues of the walls in each gallery, where the 157 works are installed both chronologically and thematically. And though they include a few gems that could register as discoveries, I found a small sculpture by Rodin that I came across in a hallway far more absorbing.

That’s why I asked Miller if he could name a work that his show could not have done without. He pointed to one of the earliest, Christ in the Garden of Olives (1824-26), a large canvas depicting a mob advancing on a resigned Jesus Christ. This is a painting that was hung so high in the Parisian church where it landed when new, and became so occluded over time, that it was barely visible. Finally, conservators took it down for cleaning, and—voila! It is indeed a marvel. Also compelling, for different reasons, were small sketches for commissioned murals. Delacroix brushed them so quickly that they look utterly abstract, and have a dynamism that I longed to see in every painting.

The Delacroix viewing experience was a little like standing on the lip of the Grand Canyon. Wow, really big! The show has several paintings devoted to big cats, as well as seascapes, historical scenes, and a few flower paintings I wish had been left out. This is not an artist who generally painted from real life. He was a true Romantic. Maybe it’s the moment we’re living in now, when real life has become surreal and mysterious, that makes the show seem beside the point.

So, why did I get the feeling that this show was out to prove something new? Of course, if academic painting sanctioned by the French Salon is your thing, then by all means, plan a visit. It doesn’t get better than this. On second thought, maybe it could. Think of Ingres. Or Gericault. When the Met does that one, I’ll be first in line.

• Delacroix, The Metropolitan Museum of Art, until 6 January 2019