Artists’ battle for refugees is beginning to pay off 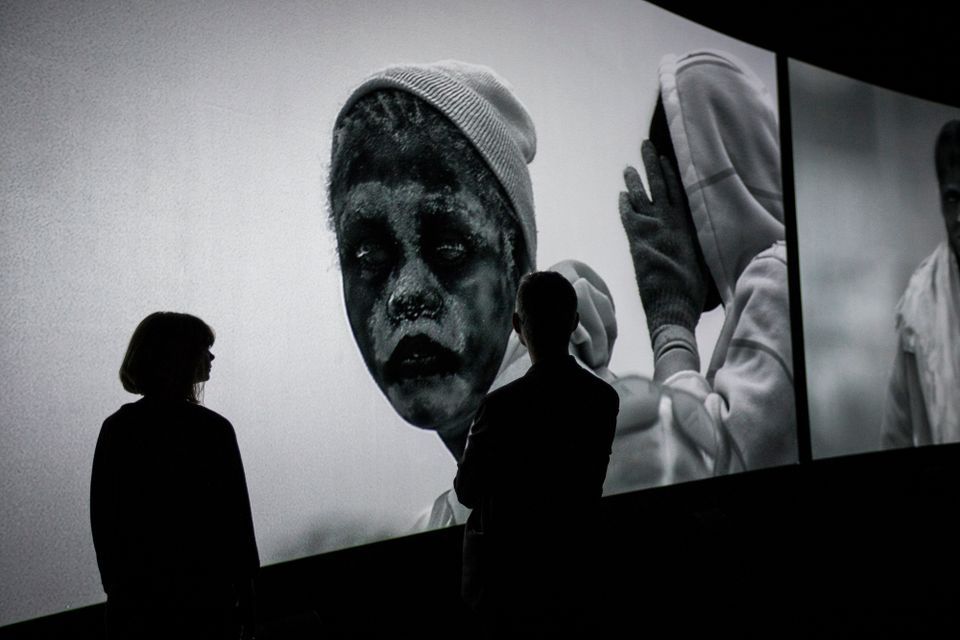 Banu Cennetoglu’s powerful work The List appeared in Liverpool in July as part of the city’s biennial (until 28 October). The piece features the names of the refugees, asylum seekers and migrants who have died “within or on the borders of Europe since 1993”, according to the anti-racism organisation United for Intercultural Action. It was first used in an art project by Cennetoglu in Amsterdam in 2007, and has been shown in grimly updated form in cities as far-flung as Athens, Sofia, Istanbul and Los Angeles. In its Liverpool incarnation, The List contains 34,361 names.

Twice, however, the 280m-long hoardings have been attacked, with the posters containing the list ripped down. Cennetoglu decided to leave the work in tatters “as a manifestation and reminder of this systematic violence exercised against people”.

The shredded, graffitied posters in Liverpool add to the potency of Cennetoglu’s gesture: they are a bleak symbol of worsening attitudes to migrant people, of which the detention of children on the US-Mexican border by President Donald Trump’s administration is but the most infamous development.

Like the Liverpool Biennial, this year’s Manifesta in Palermo and the most recent Documenta have reflected how broadly artists are responding to the refugee issue. But making art on the subject is a thorny process. Who can forget Ai Weiwei’s photograph clumsily restaging the shocking image of the body of the Syrian toddler Alan Kurdi washed up on a Turkish beach? The artist Jake Chapman told me that Ai’s response was “fucking obscene”. (Chapman has never made art about refugees; instead, he bought a boat for the charity Refugee Rescue, which has since saved thousands of lives.) The problem of artists responding to the crisis prompted the organisation Refugees, Survivors and Ex-Detainees (Rise) to write a statement in 2015, complete with ten points that artists should consider if they are to make ethical and responsible interventions.

But the fact is that the situation in southern Europe is getting worse. In September, the Guardian newspaper reported that no rescue boats from non-governmental organisations had been present in the central Mediterranean for a number of weeks, because Malta’s and Italy’s anti-immigration policies were keeping rescue boats out of their ports. It reinforced yet again an unfathomable and shaming reality: that politicians in countries signed up to the Geneva Convention, all across Europe, are using populist rhetoric to create a situation in which, as Regina Catrambone, who co-founded the Migrant Offshore Aid Station, put it: “Migrants are dying of a preventable cause, which is the lack of a robust search-and-rescue programme.”

Some artists have documented the authorities’ inadequate response. While making his film Incoming (2017), the photographer and film-maker Richard Mosse—using a military-grade thermographic camera capable of capturing images from a long distance—shot what he described as “a scene from hell” from the Lesbos shore. A boat carrying more than 300 people was shipwrecked several kilometres out to sea, and yet the first boat on the scene, operated by Frontex, the European Border and Coast Guard Agency, was, Mosse says, “designed to monitor and surveil these refugee routes, not to rescue people”. Later, he says, a Frontex helicopter was “swooping in and zooming above… and actually harassing the people who were drowning in the water”.

On the boat was a Syrian artist, Amel el Zakout, who captured the horrific scene on film and survived. Together, her footage and Mosse’s are being used in an investigation of the incident by the Forensic Architecture group, which has been shortlisted for this year’s Turner Prize. Forensic Architecture has form in this field: its Forensic Oceanography project produced a damning report in 2012 on the so-called “left-to-die boat”, on which 63 people died of thirst and starvation in the Mediterranean in 2011, despite contact with a military helicopter. Nato, the report concluded, failed to assist the migrants and prevent the 63 deaths.

It is too early in the latest investigation to know what it will conclude. The collaboration proves that artists can, in various ways, have real-world influence on the issue. Of course, they must be ethical and responsible in dealing with these fragile communities, as Rise advises. But their voices are needed more than ever amid the din of the cynical populists.