Leonardo marketed as a rock star ahead of Salvator Mundi sale 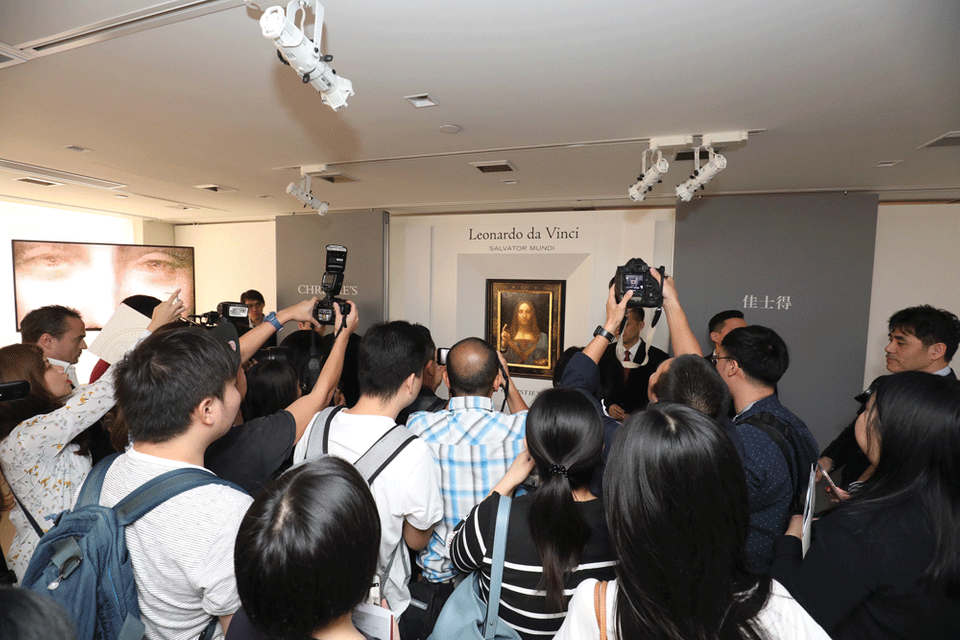 The painting travelled to Hong Kong ahead of the auction, suggesting that Christie’s anticipates strong interest from East Asia Christie’s

Rarely has Christie’s gone into such hyperbolic overdrive as with the marketing of Leonardo da Vinci’s Salvator Mundi (around 1500), which is due to go under the hammer in New York on 15 November.

Presented by the firm as the “greatest artistic rediscovery of the 21st century” and even the “Holy Grail of Old Master paintings”, Salvator Mundi is one of fewer than 20 extant paintings by Leonardo, and probably the last in private hands. (There are others on whose attribution scholars disagree.) In its publicity, Christie’s gleefully repeats the words of the distinguished scholar Martin Kemp, who has described the portrait as the “male Mona Lisa”, thus linking it to the one work that has universal recognition.

This is a trophy, destined for a billionaire stimulated by an extraordinary opportunity to acquire a work by the Renaissance genius. But what has really raised eyebrows and hackles in some quarters is its inclusion in a sale of contemporary art. This, according to Christie’s audacious specialist Loic Gouzer, is partly because the firm had already brought in Warhol’s Sixty Last Suppers (1986) and used this to clinch the deal to sell the Leonardo in the same session. But mainly, he says, it is because “there is something immortal and timeless to [Leonardo’s] images”. For him, confronting the painting with 21st-century work “adds a new context, a new perspective”. Gouzer is a pioneer in this sort of disruption, having orchestrated “curated” sales such as the highly successful Looking Forward to the Past auction at Christie’s in May 2015, which included works from Monet to Kippenberger, and raised $705.8m.

The decision to shoehorn the 500-year-old Renaissance painting into a contemporary art auction also reflects the strength of this arena, where the highest prices are being paid for living artists such as Jeff Koons and for blue-chip works by the likes of Rothko, De Kooning, Freud or Bacon. Partly because of the dearth of top examples, Old Masters do not achieve such heights. As the authoritative dealer Johnny van Haeften says: “In the Old Master field, $100m is a great deal of money, but less so in in the contemporary field.”

Buyers in this arena tend to be young, so it is no coincidence that the auction house’s campaign is “sexing up” the work, harnessing popular fiction and contemporary culture. “As fascinating as any bestselling thriller” enthuses the blurb beneath a cringe-making video on the firm’s website, featuring an Aphex Twin-esque soundtrack more befitting of a Scandi noir thriller. Hammering home his point, Gouzer claims that “young people look at Leonardo the same way they look at Basquiat”, likening Leonardo to a “rock star”.

In saying this, he is aiming squarely at buyers such as the 41-year old Japanese internet entrepreneur Yusaku Maezawa, who splurged $110.5m on an untitled 1982 painting by Jean-Michel Basquiat's at Sotheby’s New York in May. Or Wang Wei and Liu Yiqian of Shanghai; Liu has been one of the highest-profile buyers recently, notably with his purchase of Modigliani’s Reclining Nude (1917-18) for $170.4m in 2015. Their Long Museum, West Bund is currently hosting Rembrandt, Vermeer and Hals in the Dutch Golden Age: Masterpieces from the Leiden Collection (until 25 February 2018), a show supported by Christie’s in a clear bid to increase awareness and appreciation of Old Master paintings in the Far East. In October, Salvator Mundi was shown for three days in Hong Kong, where curiosity and enthusiasm was such that there were queues and a two-hour waiting time to see it.

The painting is already sold—as is the Warhol—because a third party has agreed to buy it at around the $100m estimate, which will set a new auction record for any Old Master, so the only excitement on 15 November will be whether the magic of Leonardo da Vinci’s name and feverish drum-beating from Christie’s will bring in further bidders—and to see where they come from.