CommentMuseums in the changing world order

In the second part of a new series, Adrian Ellis examines the issue of post-colonial restitution 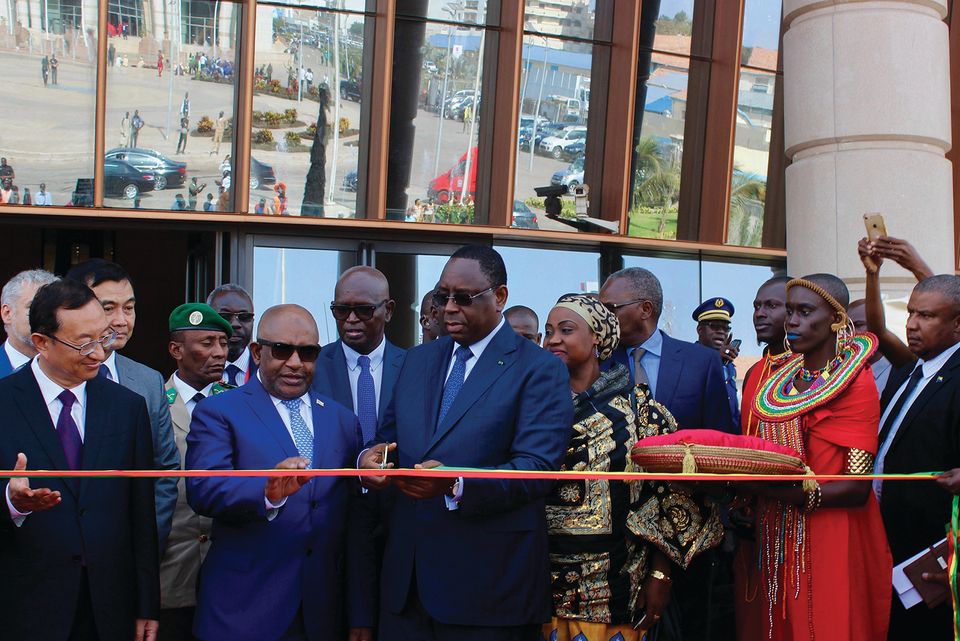 Senegal’s president Macky Sall cuts a ribbon at the opening of the Museum of Black Civilisations in Dakar last December courtesy of the Department of Arts, University of Pretoria

When Felwine Sarr and Bénédicte Savoy delivered their report last November, its uncompromising recommendations caught many European museum leaders off-guard. Commissioned following President Macron’s clarion 2017 declaration in Ouagadougou, Burkina Faso, the authors advocate for full restitution and transfer of legal title of objects from sub-Saharan Africa held in French public museums, if requested and if secured in questionable circumstances. Much of the material, they argue, is of enduring significance to the communities from which they were wrested, often in brutal circumstances, leaving their creators’ descendants bereft of critical connections to the past. The report could be read as simply another salvo in a long, messy and unequal war between Western museums and those who argue that their extensive holdings of African, Asian and Oceanic objects are in large part retained through legal manoeuvres; obfuscatory rhetoric; foot-dragging; and, when all else fails, the application of superior political power. However, there are reasons for thinking this particular salvo has opened a new and possibly decisive battle in the long war.

For the first time ever, a European leader has made unequivocal statements with respect to the untenable character of the status quo. Macron’s formal response to the Sarr-Savoy report is not yet known, and a conference hosted by the Ministries of Culture and Foreign Affairs to discuss the report, originally scheduled for April, appears to have been postponed. The president may well balk at some of the report’s conclusions, but he has underscored the legitimacy of its premises repeatedly in many widely reported public statements, and he responded to its delivery with the promise of return to Benin of 26 bronzes held at Musée du quai Branly–Jacques Chirac that were looted in 1892. And as a head of state rather than a museum director, he has effectively undercut arguments against restitution that rely primarily on the protection of legislation.

The German government appears to be edging toward a similar position. Savoy is currently working on a panel assembled by Culture Minister Monika Grütters to address Germany’s colonial legacy in Burundi, Cameroon, Namibia, Rwanda, Tanzania and Togo. The minister has expressed support for a more proactive stance on restitution: provenance efforts have been stepped up; new funds allocated to the task; and the remit of the German Lost Art Foundation has been expanded beyond Nazi looted objects to include colonial acquisitions. Michelle Münterfering, Minister of State for Cultural Affairs in the Foreign Ministry, has stated that current museum policies “contradict German values of today”.

Meanwhile, the National Museum of World Cultures and the Rijksmuseum—with its extensive holdings from Sri Lanka and Indonesia—have announced they will be returning artefacts. Other European museums are making similar declarations, although the substance of these is yet to be tested.

The British Museum appears to be maintaining the position of the Declaration on the Importance and Value of Universal Museums, signed by 18 peer institutions (but not the British Museum) in 2002: respect the law as it stands, not as it could stand; avoid the slippery slope to depletion to which any concession potentially leads; acknowledge the wide range of circumstances in which objects were acquired rather than generalising from the most egregious cases; remember the first duty of stewardship and ensure at all costs that objects are safe from conservational lapses or theft; keep objects where they can be seen in the broadest global and historical context; do not forget that the geopolitical entities requesting their “return” are rarely the entities from which they were taken; and look for imaginative alternatives to permanent restitution, such as curatorial exchanges and long-term loans. And generally, one might reasonably add, say as little as possible about these issues in public. The US has not yet made any moves either in this latest round, but it is worth remembering that the Smithsonian National Museum of African Art is perhaps the only museum with African holdings of largely unquestioned provenance, founded as it was in the post-colonial 1960s.

The rationale for a more far-reaching approach to restitution is reinforced by a parallel museum-building boom in sub-Saharan Africa, some of which is to house contemporary African art, but much of which is being built with a focus on historical and cultural collections, most of which are currently held overseas. This gambit has not worked yet for the Acropolis Museum, which still awaits the Parthenon Marbles—but in this different political context things may play out differently.

These new museums include:

• The Javett Arts Centre at the University of Pretoria (scheduled mid-2019), which will include in its displays the golden rhinoceros of Mapungubwe, currently on loan to the British Museum;

• The Benin Royal Museum (BRM) Benin City (scheduled 2021) and its affiliate, the Museum of West African Research Institute, “a world-class museum with technology-enabled displays, as well as a research centre focused on archaeology, art and antiquities research”; and 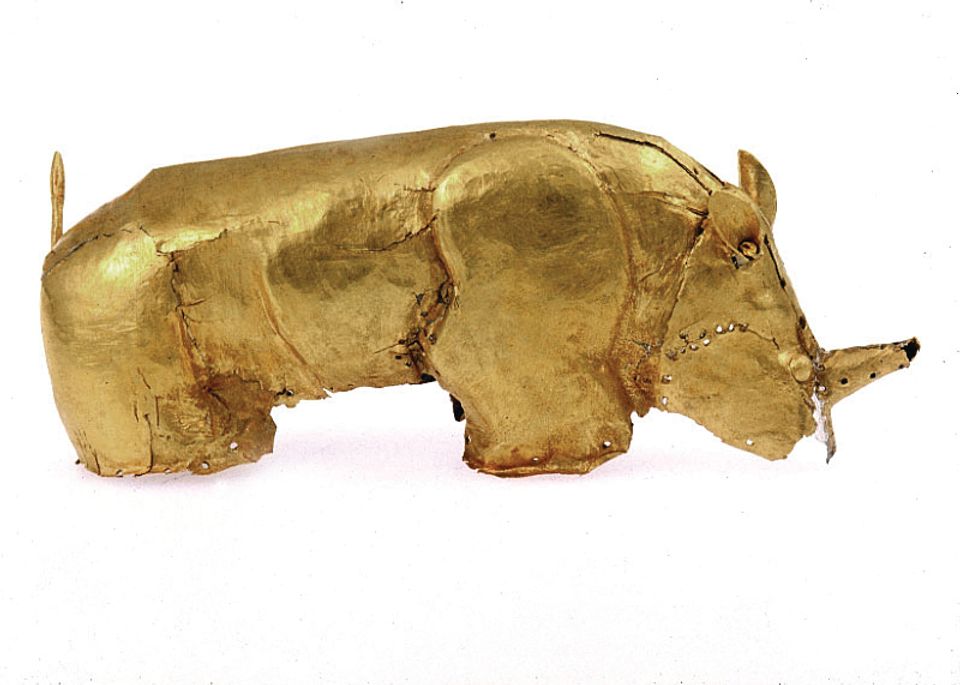 golden rhinoceros of Mapungubwe courtesy of the Department of Arts, University of Pretoria

These projects are fuelled in part by the global resurgence of assertions of the primacy of national identity, but other geopolitical forces are at work too. China is contributing to the capital costs—$35m in the case of the Museum of Black Civilisations—and it recently announced extensive African participation in its Silk Road International Museum Alliance, part of its One Belt One Road initiative. China has made prodigious investment in African infrastructure projects over the past decade and has the stated ambition of transforming the political and economic landscapes of Eurasia and Africa over the coming decades via a network of partnerships. Alongside transport, energy, agriculture and education projects, the agenda includes museums, expos, festivals and intangible heritage initiatives—cultural diplomacy at its most pointed. The Macron initiative needs to be seen partly in the context of France’s—and the West’s—losing battle for influence in Africa.

These moves all resonate with and draw political energy from changing public attitudes—a sort of feedback loop. The growing electoral importance of immigrant communities from outside Europe within France and Germany are part of the picture, but so is a more general scepticism about the moral basis of museums. Black Panther—2018’s biggest grossing movie, and the ninth largest grossing film ever—features a coruscating five-minute scene in which a museum curator talks patronisingly and inaccurately to an African-American about the artefacts displayed. The protagonist responds: “How do you think your ancestors got these? Do you think they paid a fair price? Or did they take it… like they took everything else?” Within the museum world itself, well-publicised alternative tours and apps like Museum Hack and Uncomfortable Art explore the dark side of museum holdings with polemical verve; a perspective that reflects the disposition of the upcoming generation of museum administrators and curators more accurately than their institutions’ official stance.

Encyclopedic museums are increasingly conflicted and diffident about how to contextualise their non-Western holdings. Berlin’s Humboldt Forum, opening later this year, bringing the collections of Asian Art and Ethnological Museums together, is reported by Süddeutsche Zeitung to be in a state of “permanent crisis” as it works through its curatorial policy. The Africa Museum in Tervuren, Belgium, has re-presented its collection partly in the form of a widely publicised mea culpa. Cumulatively, these are characteristics of a legitimation crisis.

Outside of the context of a headline victory or defeat involving a priceless treasure staying or going—the Marbles, the bust of Nefertiti, a Benin Bronze or Priam’s Treasure—the issue of restitution has mostly been an arcane professional preoccupation. The moral, philosophical, legal and practical questions to which restitution gives rise have tended to underwrite the status quo. However, public attitudes are at an inflection point. Geopolitics may make this a tipping point.