A man holds a US flag upside down, a sign of distress, as protesters march down the street during a solidarity rally for George Floyd, in Brooklyn. Protests were held throughout the country over the death of Floyd, a black man in police custody in Minneapolis who died after being restrained by police officers on 25 May. Wong Maye-E/AP/Shutterstock

America is in crisis and the art world is not helping. Amid ongoing protests across two dozen cities in the US following George Floyd’s killing by police in Minneapolis last week, a Kaws Companion sculpture and other works of art were looted from 5Art Gallery in Los Angeles on Saturday. And it seems that fighting for a Kaws wins out over fighting for a cause.

The gallery—which presents “urban” pop and street artists, according to its website, and features works by artists like Banksy, Invader and Takashi Murakami—posted a story to Instagram detailing the looting as it happened, which proved a kind of poetry in motion. The work of Kaws, aka the New York graffiti artist Brian Donnelly, has often been castigated for its “conceptual bankruptcy” while it fetches ever-ballooning prices at auction. His multimillion-dollar, oversized toy figurines known as Companions are in many ways emblematic of the contemporary art world’s excess of wealth and inflation of importance, all of which is of course based on an extensive lineage of white privilege and patronage.

As the masked black protester ran out of the gallery with the grey Companion—ironically removing the piece of overly commodified artwork from the white cube and restoring it to its more radical street genesis from which it was inspired—what remained was a graffitied message that read “fuck white art” on the gallery’s exterior.

Consider, however, the caption on 5Art’s Instagram post about the looting, which reads: “What a sad day! We are so much against what happened to George Floyd. But this affected our employes [sic] and the artists that had nothing to do with this. Thanks to everyone who helped us today ?? Please send over every footage you have.”

The “but” in this statement is the unequivocal defence of white privilege in the art world. It explicitly claims that the dealers, their staff and the artists whose work they sell are exempt from the perpetuation of systemic inequality. It also suggests that their sympathies for the theft of a black life at the hands of police could be causally curtailed by the looting of their property by a protester, meaning their support of anti-racism is changeable at best and self-serving at worst. And by asking for video footage that could be used to identify the man who took the sculpture and ostensibly press charges against him implicitly calls on that unequal system to enact justice in the gallery’s favour while once again threatening the life of a black person.

Many commenters on 5Art's Instagram lamented the destruction of private property within the scope of these protests rather than the loss of lives that led to the situation. Or the freedoms now at risk of being lost, as US president Donald Trump promises to mobilise the military against civilians, and police respond with undue force against the protestors, running over some with cars, pepper spraying children and identified journalists, and shooting rubber bullets at citizens on their own property.

What a sad day! We are so much against what happened to George Floyd. But this affected our employes and the artists that had nothing to do with this. Thanks to everyone who helped us today ?? Please send over every footage you have.

But the looting of the Kaws sculpture almost seemed to become a catalyst for individuals in the art world, from meme makers like Jerry Gogosian to writers and curators, to start calling on institutions and commercial entities to take a stand.

“The video of the Kaws being taken from a gallery—maybe nature is healing,” wrote the art critic Antwaun Sargent on Twitter, adding that “the silence of the contemporary art world, who have spent the last few months claiming art is essential, haven’t done much of anything to show they are on the side of the protestors, justice”.

Indeed, the silence of most galleries and museums about the protests has been as deafening as the sirens that have echoed through major cities across the nation—which is curious since they have been banging a loud drum about art’s relevance to society lately.

The coronavirus (Covid-19) pandemic closed galleries and museums across the US in March, draining multimillion-dollar budgets overnight and resulting in widespread layoffs of contract and lower-pay workers—who are statistically more likely to be people of colour versus their high-earning white counterparts. Since then, the art world’s party line has aggressively been about how the world needs art “now more than ever”, relying on an imagined history of art as some grand unifier, a utopian social tool for the masses that has somehow inexplicably been made by and held in the hands of mostly white and male artists for centuries, and which we must all rally around to support now.

And yet as literal masses of every race have taken to the streets for a week straight in a unified rally for equal rights and an end to racialised police brutality, many of the country’s largest museums—their collections stocked, by the way, with looted artefacts from Africa, the Middle East, Asia and the Indigenous lands on which they sit—have remained slow to comment on the issue.

At the time of this article’s writing, the Los Angeles County Museum of Art had posted a statement of solidarity on social media on Saturday as the city was placed under an executive order curfew by Mayor Eric Garcetti. The Metropolitan Museum of Art was the only institution of New York’s “big three” to have offered a declaration of solidarity of in support of black Americans in a caption posted alongside Faith Ringgold’s Freedom of Speech, though others posted similar sentiments within an hour of the Met. 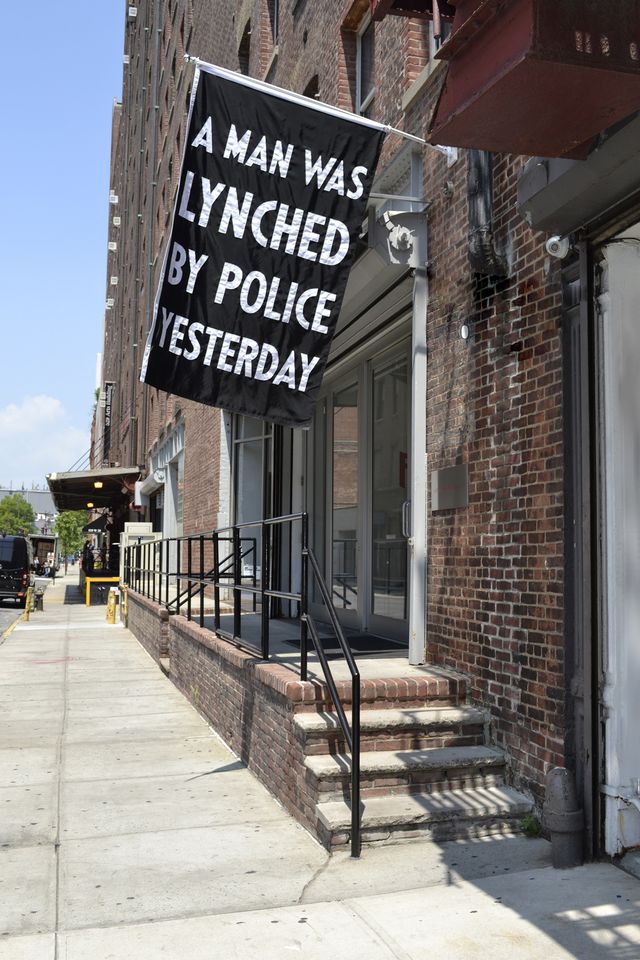 Some commercial galleries have made gestures of solidarity and activism, reposting links for bail funds to which to donate, like Lyles & King. Others have shared images of political works and quotes by black artists they represent, like Jack Shainman and Bridget Donahue, or in some cases referencing the work of activist artists, of which there are many, including the cofounder of the Black Lives Matter movement Patrisse Cullors, and Dread Scott whose perennially relevant flag that simply states in white and black “a man was lynched by police yesterday” was shared widely on social media last week.

These actions, however well-intentioned, are not enough and show how deeply ingrained white privilege is within our industry. The art world as a predominantly white entity must be far more vigilant in the ways it remains complicit in racist structures and cease simply parroting black people’s words in times of trauma. Days into nightly nationwide protests, decades into reports of systematised violence against black people, and centuries into systemic oppression that benefits the white and wealthy in this country, it is not just too little too late, but insulting if not dangerous to black communities—as the 5Arts case proves—if museums, galleries and auction houses do not make changes to the way they do their business and the people they do it with in the here and now.

As an industry, we are all already late to the game. Financial and material shifts are necessary to rebuild not just a more inclusive art world but a less oppressive society, or there will be little change. Until then, the art world is not progressive so much as predatory, relying on the labour and sacrifices of others and continuing to reap the benefits of a broken system while waiting for another to be built.