On The Art Newspaper’s anniversary, Donatien Grau reflects on the radical expansion of museums' financial, political and cultural influence 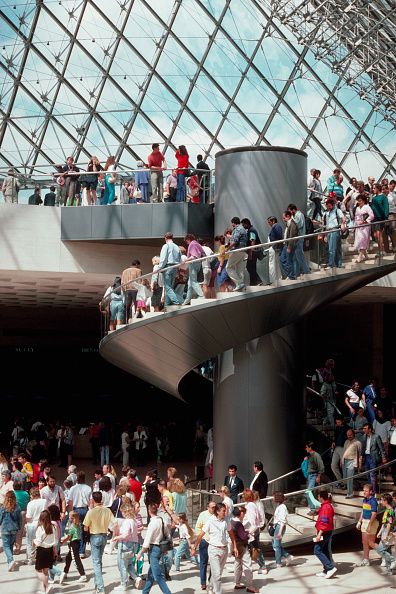 The rise of mass tourism has been a defining challenge for museums in recent decades: here, crowds of visitors at the Louvre in 1990 © Ted Streshinsky/Corbis/Corbis via Getty Images

If we could time-travel back to 1990, what kind of museums would we see? Thirty years ago, museums were almost exclusively Western institutions imposed upon the world by colonial powers. Paris, London, New York, Washington, DC, Berlin, St Petersburg and Vienna were the beating hearts of a system that had not much changed since the 1920s. They were on the verge of the greatest expansion of their financial, political and cultural resources they had ever experienced.

In Paris, the recently opened Musée d’Orsay was seen as a radical attempt to bring the most contemporary architecture into a repurposed industrial-age building. The Louvre’s new Pyramid entrance had just opened, but its ambitious restructuring known as the Grand Louvre was several years away. Russia’s Hermitage and Pushkin museums were still under Communist rule. The Berlin State Museums, long divided between East and West, were taking the first steps towards reunification. The Kunsthistorisches, Victoria and Albert (V&A) and British Museum were places mostly, if not exclusively, for connoisseurs. Alan Bowness had just retired as the director of the Tate Gallery and been replaced by a brilliant curator called Nicholas Serota. The Guggenheim in New York could not yet compete for the limelight with the Metropolitan Museum of Art or the Museum of Modern Art (MoMA)—which was still largely the construct of founding director Alfred Barr. The J. Paul Getty Museum was housed at Getty’s Roman-style villa in Malibu and the Los Angeles County Museum of Art was a local initiative.

Opening up to the masses

How distant that world may now seem. Since then, we have seen radical changes. Museums had always been political, but then they tended to reflect the times, rather than being an active force. This has shifted in large part due to the contribution of leading museum directors who redefined their jobs and institutions. To name only a few: Anne d’Harnoncourt at the Philadelphia Museum of Art, Philippe de Montebello at the Metropolitan, Thomas Krens at the Guggenheim, Glenn Lowry at MoMA, Mark Jones at the V&A, Neil MacGregor at the National Gallery and the British Museum, Serota at the Tate and Henri Loyrette at the Louvre.

Of course, there was the wider democratisation of culture and the explosion of tourism. But with Loyrette, MacGregor and Serota, directors discovered that they could be more than ambassadors, more than cabinet ministers. Their role and their museums brought together culture, spirituality and mass audiences. Where else can culture reach up to ten million people a year physically, and significantly more online?

Museums assumed a responsibility that universities mostly set aside: that of continuing education. You go to a museum to experience remarkable art but also to learn. The pedagogical and contemplative modes of museums are not contradictory. The internet generation may be less trained than their parents at sensing the wealth of differences between 2D and 3D images. But the medium has become an enormous resource: if museums can provide engaging content online and facilitate physical experiences on-site, then it is a double win. Digital technology brings a wealth of information to museum visitors—before, after or while they wander through the galleries—all at the tap of a smartphone screen. It offers flexible, creative content to a wide audience, in ways that would be impossible on the walls.

‘You pay, we operate’

Museums have also emerged as big business, with the potential to transform their local economies. They cost a great deal, but they can contribute a great deal. With the surge in visitor numbers came the need for fundraising. Museums could be thought of as Western commodities the whole world wanted to buy. That was the concept Krens tapped into with the Guggenheim franchise model (“you pay, we operate”), which reinvented Bowness’s public service-driven creation of Tate Liverpool. Museums have become increasingly linked to private money, to be used for the public’s interest—an understanding most often shared by sponsors.

Institutions are held accountable like never before, though the live debate on cultural representation has been building for more than 50 years. Museums have a duty to give a contemporary reading of their time. When conservative voices accuse the current anti-racist movements of historical revisionism, they confront the crux of museums: the purpose is not to cancel history, but to make it more apparent. It is to see what our culture did not allow us to see before, to broaden our narratives with elements that had been long overlooked. The fact that Alexandre Dumas is a national French hero is not contradicted by the fact that he was black; quite the opposite. Pont-Aven in Brittany was not a “primitive” backwater where Paul Gauguin found inspiration; painters flocked there from all over the world.

As we in museums all hope for the return of our audiences in the wake of Covid-19, let us not forget the visionary achievements of museum leaders going back 30 years or more (Montebello, Bowness, Michel Laclotte, among others). Museums are no longer mere Western constructs; they have been entirely redefined, for instance in Mumbai with the CMSVS, in Dakar with the Museum of Black Civilisations and in the United Arab Emirates with Louvre Abu Dhabi.

The power of the present is more palpable than ever in today’s museums, as even the most historical institutions experiment with contemporary art exhibitions. But all museums are contemporary: they are a product of their times, a fact they can either deny or embrace. The challenge facing museums in 2020 is to be more inclusive than ever while respecting the thread of each history, hiding and negating none. Museums must embrace this mission with the greatest sense of responsibility, offering at once learning, contemplation and discovery.

Only then can they remain relevant in a changing world, where funding is likely to decline due to the continuing challenges of the pandemic, and where the very alliance that reshaped museums—that of power, money, visibility and audience—is coming under severe scrutiny. An era of museums is closing down. Was it a golden age? It may be that there is no golden age, that every time has its possibilities and limitations. Public service will carry us forward: as the public changes, so does our very notion of public service. Where the audiences of tomorrow lie, therein lies the mandate of museums.