Remembering Germano Celant, champion of Arte Povera and a noted curator, critic and historian on both sides of the Atlantic

Italian impresario was a curator of contemporary art at the Solomon R. Guggenheim Museum in New York, and artistic director at the Fondazione Prada in Milan

In his career-long investigation of Arte Povera—the artistic phenomenon he had, in fact, christened—Germano Celant alternately described artists as “alchemists” and “nomads”, who conduct “guerilla warfare” against accepted norms, styles and institutions. For anyone who knew Germano or, as I did, had the opportunity to work closely with him, it was clear that these attributes applied equally to his own unorthodox methodology as a curator, critic, philosopher and impresario. It feels inconceivable that a man of his prodigious energy and passion for the intellectual life of art has gone, after succumbing to Covid-19 at the age of 79, and the art world mourns his passing.

Germano Celant was born in 1940 in the Northern Italian port city of Genoa; his adolescence coincided with the Italian “economic miracle”, marked by the post-Second World War transition from a largely agrarian economy to one defined by industrialisation and an embrace of the free market. Though he would later in life organise an exhibition on the impact such modernisation had on art, cinema, fashion and design—The Italian Metamorphosis 1943-1968 (at the Solomon R. Guggenheim Museum, New York, in 1994)—his key memory from this period was of the impassioned fighting between Communist workers and neo-Fascist party members. His identification with working-class struggles led to an unyielding support for artists as cultural producers and, perhaps, a life-long resistance to aligning himself exclusively with any one institution.

The same held true for his chronologically overlapping position of artistic director at the Fondazione Prada in Milan, which he assumed in 1993. And when the foundation opened its campus in 2015, Germano’s title morphed to artistic and scientific superintendent, a title he claimed to prefer since being a director implied too much authority and bureaucracy. True power, he once explained to me, lies not in running things but rather in having the strength and resolve to acknowledge one’s collaborators and supporters, something he never failed to do.

As a young man, Germano enrolled at the University of Genoa to study engineering, adhering to his parents’ wishes, but soon came under the sway of the Renaissance scholar Eugenio Battisti, who professed a “baroque vision of art”. He taught that art should be understood for its multi-sensate capacity, in which its conceptual valences are as critical as the visceral experience it causes. In 1963, Battisti founded the Museo Sperimentale in Genoa as a teaching museum, and Germano was charged with soliciting donations from contemporary artists around Italy. This, in effect, launched his direct engagement with living artists and his mission to represent the art of his time. In 1967, he organised the defining exhibition Arte Povera—IM Spazio at Galleria La Bertesca, which included work by Alighiero Boetti, Luciano Fabro, Jannis Kounellis, Giulio Paolini, Pino Pascali and Emilio Prini.

True power, he once explained to me, lies not in running things but rather in having the strength and resolve to acknowledge one’s collaborators and supporters, something he never failed to do. Nancy Spector

Like the fabled Pictures exhibition staged by Douglas Crimp at Artists Space, New York, decades later, this show defined a movement even though a number of its practitioners were not included. Germano’s embrace of a “poor art” that used humble materials was positioned at the time as a poetic antidote to the market-oriented slickness associated with American Pop Art and Minimalism. The aesthetic he touted in the accompanying manifesto published in Flash Art, “Notes for a Guerilla War”, though rooted in an Italian sensibility, shared much with what is now understood as the emergence of a global post-minimalism with its emphasis on contingency, process, materials and the corporeal. When he published his 1969 book Art Povera, Germano had expanded his roster of associated artists to include an international array of post-minimalists including Joseph Beuys, Jan Dibbets, Eva Hesse, Hans Haacke, Richard Long and Lawrence Weiner, to name a few. 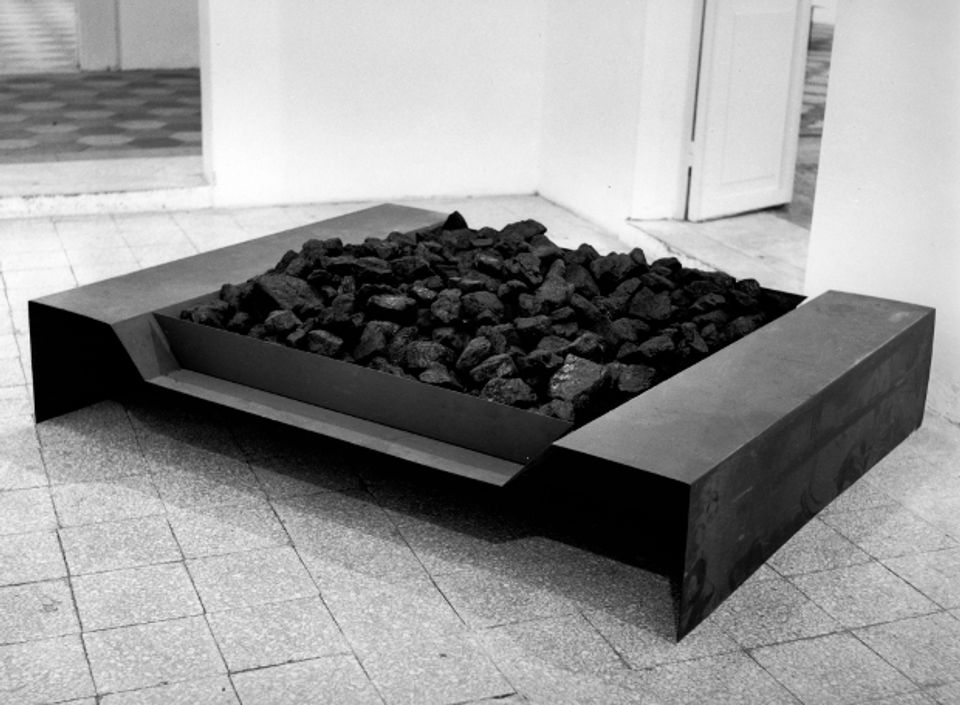 Germano’s first exhibition at the Guggenheim expanded on his Arte Povera origins with a major Mario Merz retrospective, in 1989, but the shows that followed evinced his ecumenical tastes: Rebecca Horn; Claes Oldenburg; Robert Mapplethorpe and the Classical Tradition, Andy Warhol (at the Museo Guggenheim, Bilbao); and the aforementioned The Italian Metamorphosis. While I assisted him on the Merz and Horn exhibitions, we collaborated on a series called Osmosis that brought together pairs of artists to create something entirely new. The first (and only) iteration realised was a small show of work jointly conceived by the unlikely alliance of Haim Steinbach and Ettore Spalletti. The subsequent two pairings we were actively preparing combined Pina Bausch with Barbara Bloom and Laurie Anderson with Wim Wenders. This unrealised, experimental project beautifully encapsulated Germano’s belief that “the museum must abandon its monotheism and the theology of art if it is to represent its link with other archipelagos of communication and production… The spilling over… of all the visual practices is essential to an understanding of a historical period… The treatment of a cultural epoch should not admit any disciplinary limits.”