Ignominy to influence: a history of women at the Royal Academy

London institution’s founders included two women, but a long period of male domination has only recently been challenged 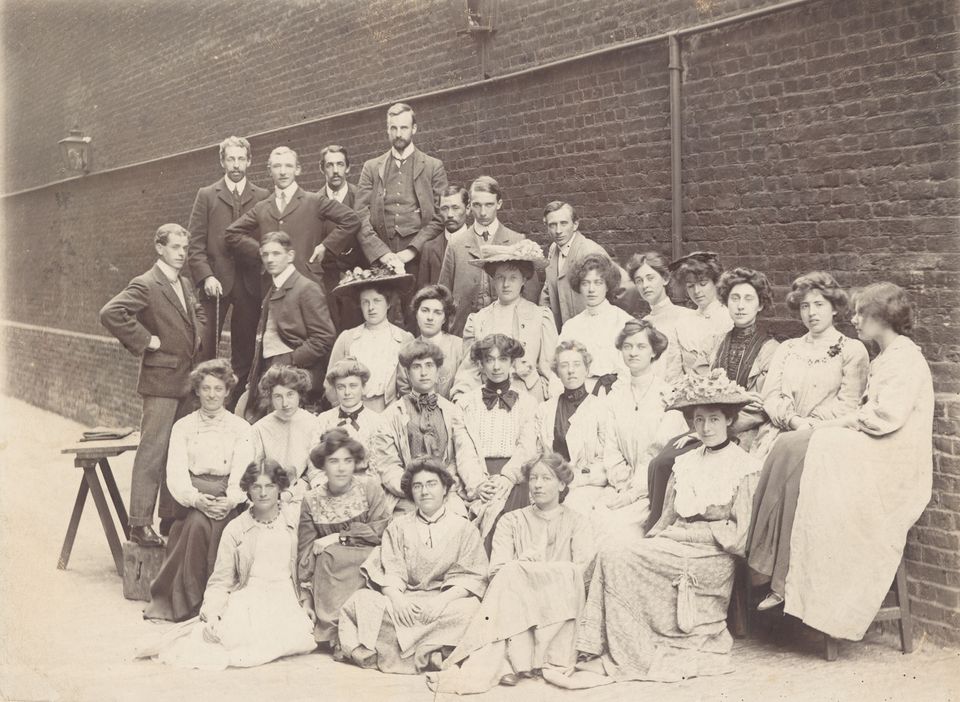 Students at the RA Schools —including Ethel Morgan, the writer’s great-grandmother—around 1906 The Royal Academy of Arts, London

In July 1901, Ethel May Morgan enrolled to study painting at the Royal Academy (RA) Schools. Neatly inscribed in that year’s intake column on the student register, a liberal posy of Roses, Olives, Florences and Gertrudes is scattered among the Cecils, Reginalds, Percivals and Victors. A photograph taken around 1906, the year she graduated, shows Ethel among a group of students, of whom more than two-thirds are female.

Ethel Morgan was my great-grandmother. Studying at the RA Schools did not bring her fame or fortune, but it furnished her with the skills to support herself and her family across a long career as an artist (and even to sculpt prosthetic limbs for soldiers during the First World War). When she enrolled, it was 41 years since the first female student, Laura Herford, had been admitted, somewhat by hazard, in 1860, after submitting work signed only with her initials. It took decades of heated argument before a ban on female students attending life classes was lifted during the 1890s.

It is odd that it should have taken so long for the RA Schools to admit female students, for there were certainly female artists involved in its foundation in 1768. “Women have exhibited at the Royal Academy right from the beginning; it goes back to the two female founder members,” says Helen Valentine, the RA’s senior curator. “Although Mary Moser was the daughter of the Keeper, she was exhibiting and winning prizes from the age of 14: she was a serious artist. Angelica Kauffman was very successful both here and abroad.”

The presence of Moser and Kauffman among the RA’s 34 founder members might have seemed indicative of progressive views, but the institution soon “became very male”, Valentine says. Even during Moser and Kauffman’s lifetime, limits were imposed on their participation. Johann Zoffany’s The Academicians of the Royal Academy (1771-72) shows the 32 male Academicians preparing for a life class with two male nudes: the female Academicians are present only as portraits on the wall. No further women were elected to the Academy until Annie Swynnerton was made Associate in 1922 and Dame Laura Knight a full Royal Academician in 1936.

The male-dominated conservatism of the British art world had earlier made its institutions the target for high-profile attacks by suffragettes. In March 1914, Mary Richardson slashed Velázquez’s Rokeby Venus (1647-51) at London’s National Gallery. Further incidents followed at the National Portrait Gallery and the British Museum, as well as at the RA, where Mary Wood smashed the glass of John Singer Sargent’s 1913 portrait of Henry James at the Summer Exhibition, cutting the canvas repeatedly with a meat cleaver while shouting: “Votes for women!” Later informed that she had caused damage worth as much as £300 to a painting valued at £700, Wood responded: “I quite understand; if a woman had painted it, it would not have been worth so much.”

It was not until the late 1960s that women gained equal access to Academicians’ events. The final push came in the wake of a spirited letter from Gertrude Hermes in 1966, in which she described how the three female members invited to a meeting to elect a new president of the Academy were barred from attending the dinner that followed. “This is an ignominious situation which I have never found myself in before and will not lend myself to ever again,” Hermes wrote. “It was humiliating and I left hurriedly.”

Admissions to the RA Schools have been split roughly 50/50 since 2000. Changes to the gender balance among Academicians have necessarily been slower: there can be no more than 80 at one time, with vacancies arising when incumbents reach the age of 75 and attain Senior RA status, or upon their death. Of the 79 current Royal Academicians, only 25 (just under one-third) are female; of Senior Royal Academicians, women make up less than a quarter, which suggests that things are shifting, if slowly. 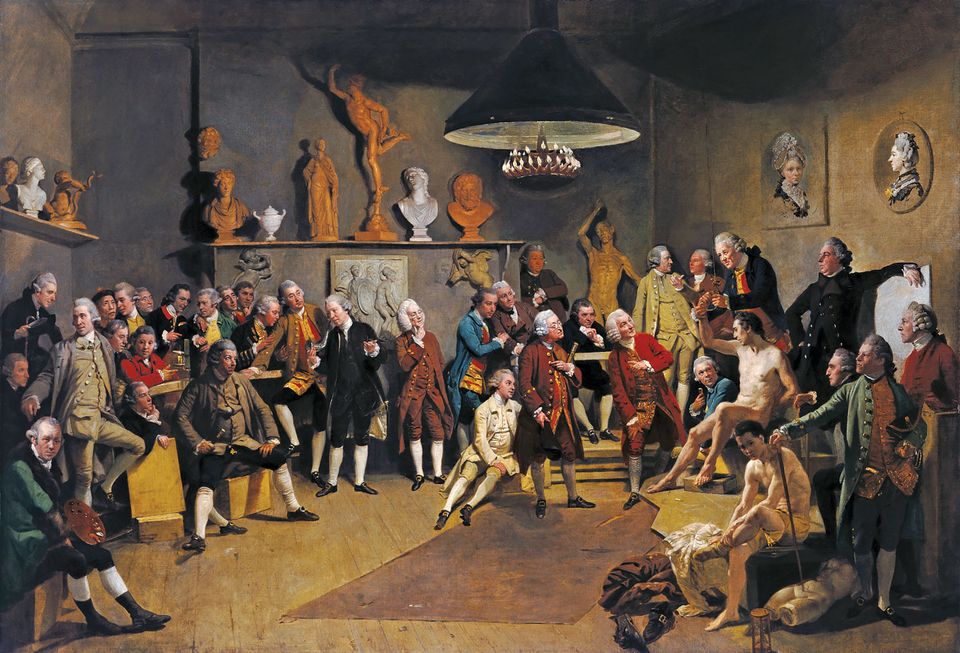 Zoffany’s painting depicts the RA’s 34 founders taking a life class, but the two female members are present only as portraits on the wall The Royal Collection, London

Still, it all sounds a little stick-in-the-mud and patriarchal: is the RA really still relevant to today’s art scene? Yes, because the role of the Academicians is to elevate and support the next generation, says Sonia Boyce, who was elected RA in 2016. “The most important thing is that one is voted in by one’s peers,” she explains. “As an institution, the Royal Academy is there to foster what is emerging as well as what is established. Within that context, the work of women artists and black artists has to be thought about.”

Rebecca Salter, the current Keeper of the RA, recalls that in the 1970s, when she was a student at Bristol Polytechnic, she was “not taught by any women at art school, and I wasn’t aware of any female artists”. The differing perspective she has observed in the current student body at the RA Schools has come as a surprise. “I can’t imagine a male student I was at college with acknowledging the work of women artists; now, they talk about the work of women artists in the same way they talk about male artists,” she says.

Free of fees, the independent postgraduate programme at the RA Schools has a peculiar degree of self-determination. The 50/50 admission policy predates the arrival of the curator Eliza Bonham Carter, the head of the RA Schools, and she says that it is her intention for the curriculum to echo the gender balance of the student body, “so there would be an equal number of people speaking in lectures and artist talks”. It is an issue that the students are vocal about. “What strikes me is, first, how articulate students are on this subject, and second, the fact that it is so present, so live and so unresolved—there’s a sense of how much still has to be done,” Bonham Carter says.

Topping the list of the female artists whom Bonham Carter identifies as having the greatest influence on her students are Hito Steyerl, Isa Genzken, Meret Oppenheim, Eva Hesse and Jenny Holzer. As tests of relevance go, this is telling: the list is dominated, today, by artists from Germany and the US. One wonders if an Academician’s name might ever make it on to a future version.