As a major exhibition opens in Birmingham, the British artist discusses how growing up in Guyana has ensured that maritime themes are in his DNA

The British artist Hew Locke is best known for works reflecting both his fascination with and ambivalence towards ideas and images of Britishness within a global context. His explorations of cultural and national identity have ranged from giant images of the Royal Family ornamentally encrusted with mass-produced plastic goods to an immersive installation on the battle cruiser HMS Belfast with mannequin sailors decked out in carnival costumes and masks. Locke was born in Edinburgh and is based in London but spent his childhood in the then recently independent Guyana, and the language and symbolism of colonial and post-colonial power continue to be an enduring preoccupation. Recently he turned his attention to ships, in the suspended fleet of model boats displayed at the Folkestone Triennial in 2011 and in the Diaspora Pavilion at the Venice Biennale in 2017. An extended version features in Here’s the Thing, Locke’s major survey at Birmingham’s Ikon Gallery, opening this month, which combines historical sources with his own personal and political concerns.

The Art Newspaper: Your preoccupation with the Royal Family and post-colonial Britain has a particular resonance within the present political climate. Does the title of your Ikon exhibition refer to the current status quo?

Hew Locke: “Here’s the thing” is a phrase I use a lot when I’m about to put a point across or explain something, and, to an extent the title refers to the situation we find ourselves in. But I have always been working around these ideas of nationhood, of Britishness and how cultures invent themselves. This goes way back to growing up as a kid in Guyana. I was born in Edinburgh but arrived in Guyana in the mid-1960s in time for independence; I have childhood photos of me in a t-shirt with the Guyanese flag on it. So I saw a flag being made, a nation being made and we sang the national anthem for the first time. Cut to all these years later and it’s no surprise that I am working with ideas of nationhood from a point of view of both being in a country and also how it relates to the world, and how we are now in this very, very tricky situation.

Growing up in Guyana seems to have been a crucial influence.

I came to study at art school in England in 1980 but it wasn’t until I made a trip back to Guyana in 1987 that I really connected with who I was and what I was about. What people don’t talk about in Guyana is that the majority of the population are descended from indentured servants from India. So I went to a school run by Anglican nuns from Kent but I also grew up with mosques and celebrating Hindu festivals, and I realised that’s where my love of Indian miniatures, ornament and latticework comes from. Guyana is a small country and we didn’t have a tourist industry; we had to really fight to make ourselves heard.

Is this also the origin of your interest in globalisation?

Yes. I was always looking out. It’s about loving where you are but wanting to connect with the whole wide world. We lived right by the sea and we’d sit and watch the boats going out and then eventually disappearing over the horizon. I was constantly aware that we are a nation that has a history in trade, so it’s not surprising that ideas around trade and migration have ended up becoming a large part of my work. Guyana means “land of many waters” and to get anywhere you had to travel by boat, so the maritime thing is in my DNA. It was a colonial society with a global outlook.

The grand finale of the Ikon show is a flotilla of model boats suspended from the gallery ceiling.

It’s 50 boats of varying sizes, some of which I showed in the Diaspora Pavilion in Venice in 2017, along with some new additions. They are boats from a number of different periods and places—some are completely made by me, some are found objects which I have customised. It is called Armada—which I thought was an appropriate title for these times. But although it in part addresses our current fear of invasion, Armada is also a Spanish-Portuguese word for a naval fleet—I always like to give titles that have a double-edged meaning. It’s about the past and the present clashing together so you have a galleon next to a rusting hulk of a cargo ship, which in turn is next to a ship that you are not really sure where it comes from. 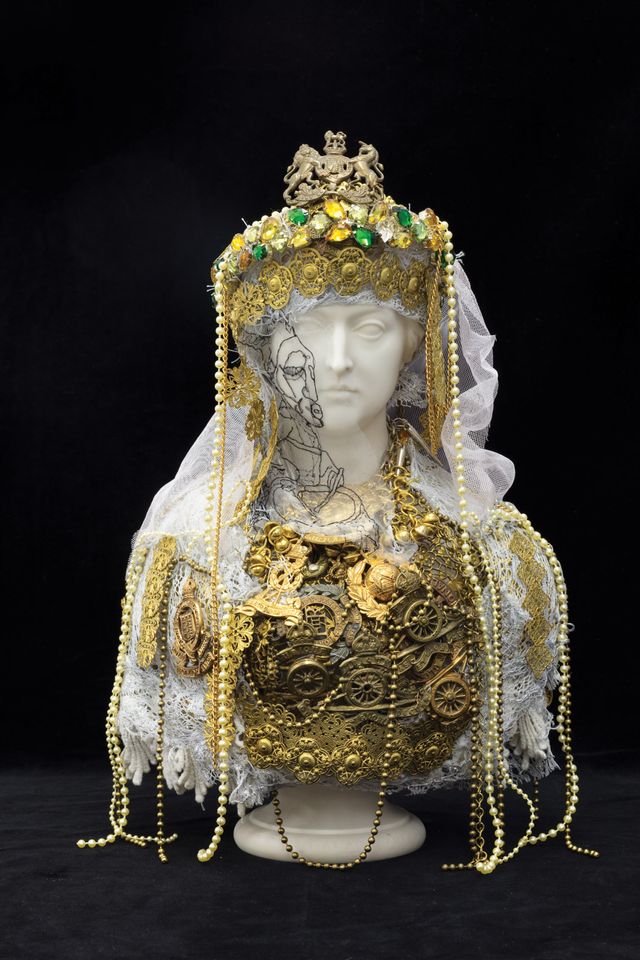 They all look very battered, with torn sails and rusty patches, and yet at the same time they are lovingly adorned with flowers and medals

Yes, they have all seen better days. Basically they are meticulously messed about: a broken kind of beauty is what I am trying to do. They are votive boats, based on models I’d seen in churches and cathedrals in continental Europe which are there for a variety of reasons, but usually to give thanks for surviving on the sea. These boats I make are loved things: that’s what’s important about them. Some have UN medals dotted on them; some have votive coins and good luck tokens. They are not specifically talking about the current refugee crisis: it’s about a longer, wider view of history where perhaps yesterday’s refugee might be today’s citizen.

Your images of the British Royal Family cover their faces with incrustations of cheap, mass-produced plastic toys and decorations. Are they a celebration or a critique?

There’s a very fine balance and I agonise about it a lot. In my head I’m neither a royalist nor a republican; I’m just fascinated by the whole institution and find it strange and intriguing. And, of course, it is not just about the Queen; it’s also about her as a representation of the nation, which goes back to my fascination with Tudor portraits like the Ditchley Portrait of Queen Elizabeth I, where she is standing on a map as Gloriana, symbol of Albion. Bedecking the Queen’s image also came out of a seminal moment in British society when Princess Diana died in 1997, the same year as my English grandmother, and these votive altars and shrines sprang up in a way that was almost as if the country shifted from being Protestant to Catholic overnight. So these works are not a joke but they are not political satire either—it’s heartfelt and quite serious for me. I have made dark images of the Queen and lighter images of her, it’s a nuanced thing.

In your most recent Souvenir series, portrait busts of Queen Victoria and her family are almost smothered with medals and jewellery.

I’ve been fascinated with statues since I was a kid seeing statues of Queen Victoria in Guyana. The busts in this series were originally souvenirs of the Crystal Palace and they are now deeply unfashionable, which I also love. I have deliberately reduced my use of plastic over the past few years and here I have added not only jewels but also military badges and replica medals. There are some from the Benin campaign and the Ugandan and Zulu Wars, and there’s even a medal from the second Afghan War of the late 19th century. They are weighed down by the literal burden of history and this goes back to my idea of how a nation creates itself, what stories it sells to itself and how this relates to ideas of Britain and its history that are weighing down the minds of people today. This whole show is essentially about power: who had it, who has it and who desires it.

Born in 1959 in Edinburgh, Scotland, while his father, the Guyanese sculptor Donald Locke, was studying. His mother is the painter Leila Locke. In 1966 the family settled in Guyana and in 1980 Locke returned to the UK, receiving a BA in fine art in 1988 from Falmouth University and an MA in sculpture from the Royal College of Art in 1994.

In 2000 Locke received a Paul Hamlyn Award and an East International Award, while Hemmed In Two appeared at the Victoria & Albert Museum. Other significant exhibitions include the 2011 Folkestone Triennial. In 2015 The Jurors, commemorating 800 years since the signing of Magna Carta, was inaugurated at Runnymede, and the Imperial War Museum commissioned The Tourists, an intervention on HMS Belfast. Locke’s installation On The Tethys Sea was shown at the Diaspora Pavilion at the 2017 Venice Biennale. 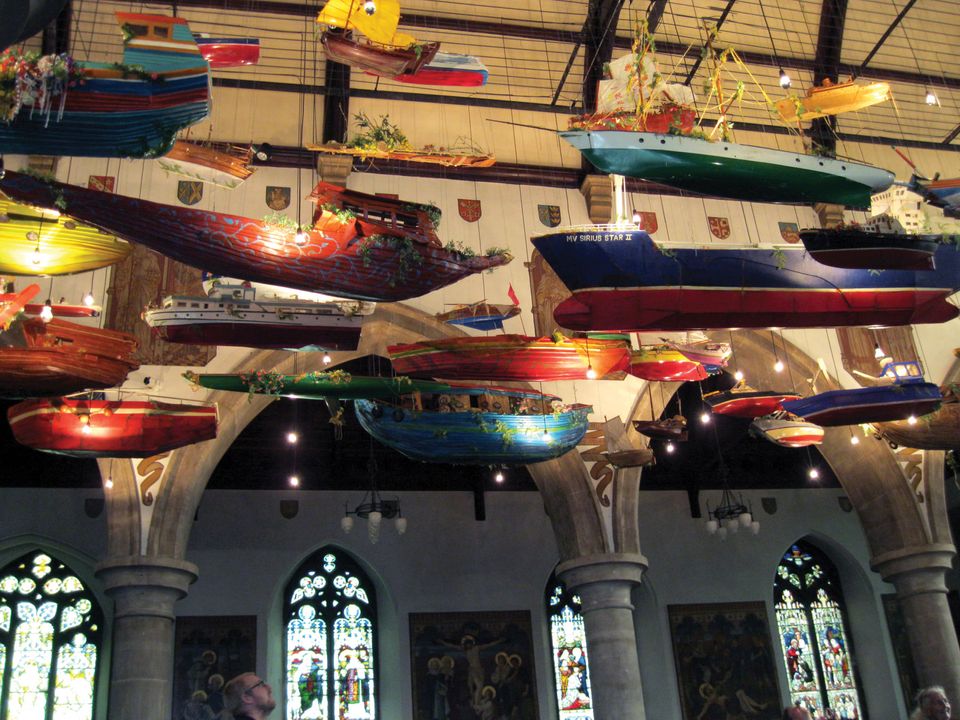 ”This was my first contemporary version of the votive boats I had noticed in European cathedrals and churches. It was commissioned for the second Folkestone Triennial in 2011 and hung in the nave of St Mary and St Eanswythe Church. There are boats from Japan and Malaysia as well as Folkestone fishing boats and a Saudi crude oil tanker that was held to ransom by Somali pirates. They are all a variation on the idea that, wherever we come from, we are all in this thing together: there but for the grace of God go you and I.” 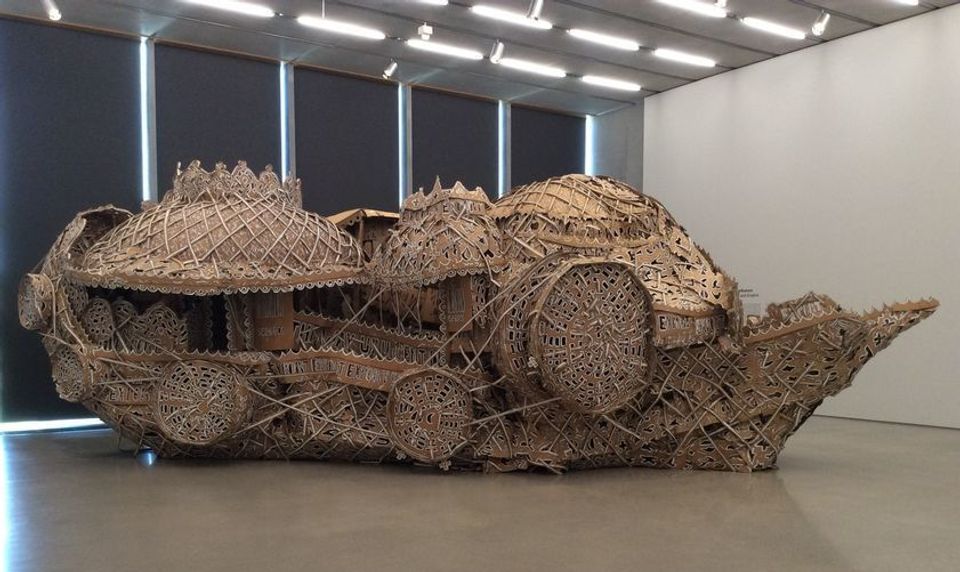 ”This was my first big cardboard piece. It was about using really cheap materials to lift packaging from something everyday into something magnificent. The export signs refer to the fact that at that time all my work was deemed to be an export from somewhere else, and the barcodes are those of objects from the Victoria and Albert Museum that have racist connotations. The work was first shown jammed between the pillars at the entrance to the V&A, and the title is also to do with how I felt jammed in by people’s opinions at the time. It is now in the Perez Collection in Miami so it has literally become an export in its own right.” 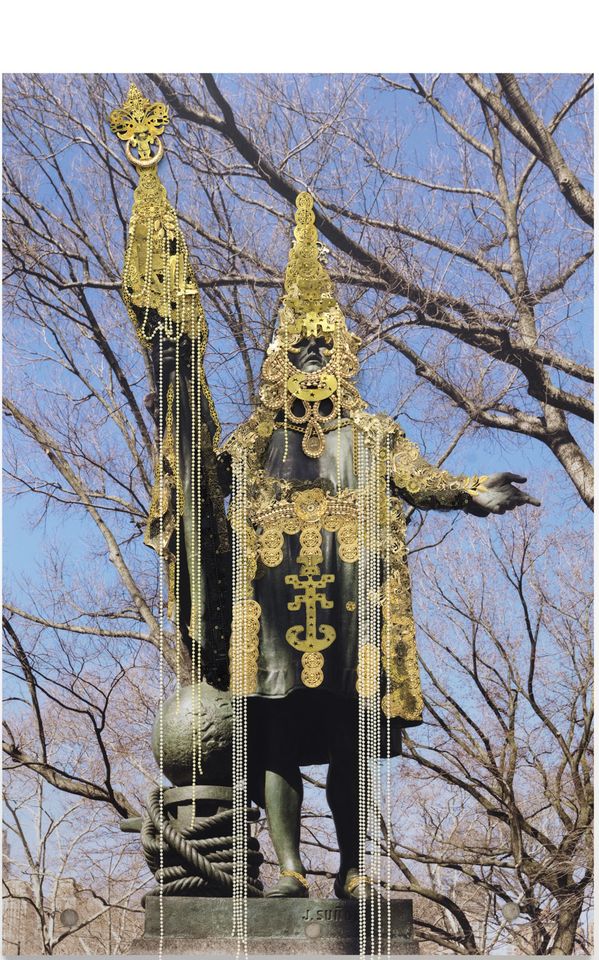 ”Statues are controversial things but it’s also often more complicated than it might seem: if you are a Native American then Christopher Columbus is obviously a big problem, but if you are an Italian-American then he’s an important historical figure. The ornamentation relates to the history around it; in Guyana the indigenous Amerindian population were at the bottom of the pile and here I have added pre-Columbian designs and also a replica Indian Wars medal.“