By using The Art Newspaper website you agree to our use of cookies as described in this Cookie Policy.
Close notice
Preview
ePaperNewsletter
Artist Beau Stanton’s Ava Gardner mural in Los Angeles. Photo: courtesy of the artist

Wearing its art on its sleeve: Los Angeles' enduring passion for murals

The city’s street paintings, vehicles for protest since the 1930s, continue to be a flashpoint

Los Angeles is a painted city, known for its long history of street murals. And these works ignite a fierce response from its residents, whether it be a sense of pride or an urge to protest.

The power of such public art can be seen in the recent uproar over a mural portrait of the late Hollywood actress Ava Gardner, painted by the street artist Beau Stanton at the Robert F. Kennedy Community Schools complex in central Los Angeles. In December, Korean activists complained that the sun-burst background was too similar to Imperial Japan’s Rising Sun flag–which many today view as a symbol of aggression and a reminder of war crimes—and the school appeared to cave to pressure to remove the mural.

But then the street art star Shepard Fairey stepped in, threatening to remove his own portrait of Senator Kennedy from the front of the school’s library, metres from where the politician was murdered in 1968 at what was then the Ambassador Hotel. “Ironically, the only way to serve what [Kennedy] stood for is to use the threat of the removal of his portrait mural to stand up for artistic expression over reactionary misinterpretation and censorship,” Fairey writes on his website. 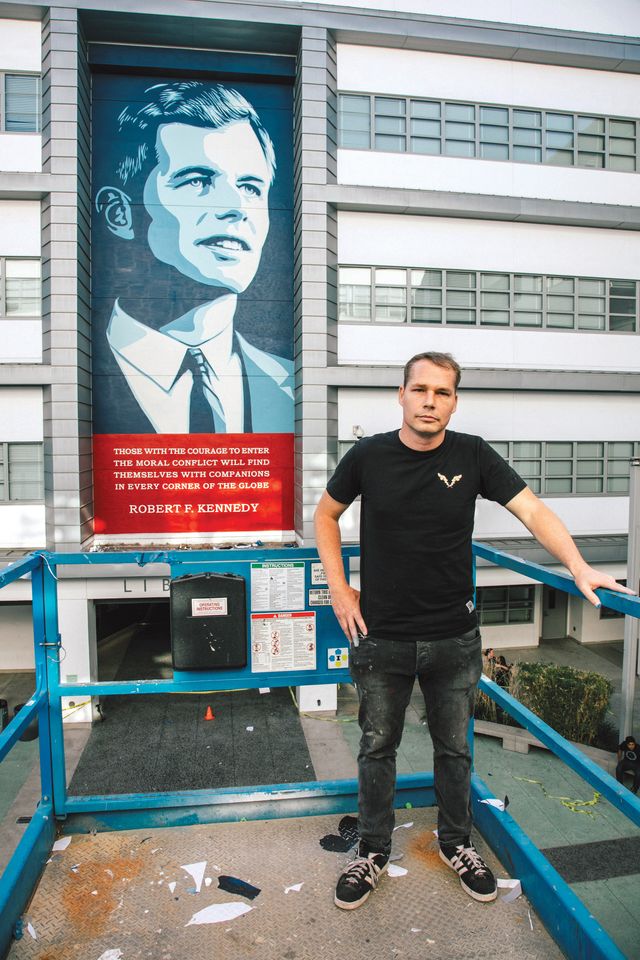 For now, Stanton’s painting is safe—as we went to press, the school was discussing the future of the work with all interested parties—but the standoff shows just how high emotions can run when it comes to the city’s murals.

The earliest surviving public mural in Los Angeles caused scandal when it was painted by the Mexican artist and communist activist David Alfaro Siqueiros in 1932. América Tropical was commissioned by F.K. Ferenz, the director of the Plaza Art Gallery, which occupied the second floor of the Italian Building in El Pueblo, the historic heart of Los Angeles. But, instead of painting something idyllic celebrating “the land of plenty”, as requested, Siqueiros came up with the image of a crucified Indian figure, with an American eagle looming above him. Two sharpshooters take aim at the bird of prey from nearby.

“Legend has it that Siqueiros and a couple of assistants painted the central section overnight before the unveiling,” says Leslie Rainer, a senior project specialist at the Getty Conservation Institute, which cares for the mural together with the city.

The reaction to the brazenly anti-American work was severe: the sharpshooters were painted over within two years and the mural was completely whitewashed by the end of the decade. The Los Angeles art critic at the time, Arthur Miller, wrote in 1934: “It is a powerful work. Some people think it very ugly. A week ago, fifteen feet of the fresco was whitewashed […] This brings up once more the question of artist’s rights versus owner’s rights.”

Renewed interest in the piece came in the 1960s with the rise of the Chicano mural movement, a form of resistance and way of expressing particular blends of Mexican-American culture. The art historian Shifra Goldman started a grassroots campaign to preserve América Tropical, which eventually reopened to the public in 2012.

“What is eerie is how timely it is today,” Rainer says, noting how, during the late 1920s and early 1930s, as many as 1.8 million Mexicans and Mexican-Americans were deported from the US.

Despite never returning to Los Angeles—Siqueiros’s visa was not renewed—the Mexican artist’s anti-imperialism stamp was left indelibly on the city, inspiring others to do the same.

In the decades that followed, the faces of Che Guevara, Lenin and other revolutionary figures began to spring up in neighbourhoods such as Boyle Heights, Highland Park and East Hollywood. Further challenges to the white, capitalist hegemony came with the multiculturalist muralist movement that mushroomed across Los Angeles in the 1970s and 1980s. An artist working on one of the city's many murals Photo: Lord Jim/CC BY 2.0

One of south Los Angeles’s most revered murals, Our Mighty Contribution (2000-02), depicting African-American figures including Martin Luther King Jr and the former Black Panther leader Kathleen Cleaver, was defaced in November with swastikas. Created by around a dozen local artists including George Combs, Alonzo Davis, David Hammons and Roland Welton, the vandalised part of the mural was quickly repainted.

There are now plans to build Destination Crenshaw, a 1.3-mile open-air museum in South Los Angeles that planners say will revitalise the heart of black Los Angeles. As part of the $100m project, Our Mighty Contribution is due to be fully restored and treated with a protective coating.

Murals in their myriad forms are just one part of the rich tapestry of outdoor works in Los Angeles, however. The dealer Jeffrey Deitch, who is showing at Frieze Los Angeles this week, notes how the photo-realistic art of someone like Kent Twitchell, whose monumental portrait of the Los Angeles artist Ed Ruscha adorns the American Hotel, differs from the work of the street artist RISK, who brought a version of New York City’s “wildstyle” graffiti to Los Angeles.

“Murals are quite beloved in Los Angeles; when television shows pan across scenes of the city, they often include these murals. But graffiti is not treated in the same way,” says Deitch, who in 2011 organised the exhibition Art in the Streets at the Museum of Contemporary Art, Los Angeles while director there.

“Everyone drives here—the billboard is the image that is visible as you go rushing by at 50mph,” Deitch says. “It’s a completely different visual culture to London or New York, and these murals really fit in with that.”

In 2002, a row over the proliferation of commercial billboards caused a decade-long embargo on murals, with city laws making no distinction between artistic works and commercial signs. The moratorium was lifted in 2013, but by then organisations such as the Social and Public Art Resource Center estimated that half of the city’s murals had been lost.

The Los Angeles mural artist Art Mortimer recalls how, once the ban was revoked, “murals just exploded; they were everywhere”. Now, he says, “it’s not about history or the community: it is art on walls”.

Mortimer also observes how the art form has become professionalised. “When I painted Brandelli’s Brig in 1973 [a mural inside a mural, outside a bar], it was all done on a handshake. We agreed on what it was going to be and how much they were going to pay me, and I got busy,” he says. “Now the contracts are drawn up by lawyers and you have to have insurance.”

As street art becomes increasingly marketable, its public function is starting to be eroded. One mural on Melrose Avenue that only allowed verified social media influencers with more than 20,000 followers to pose in front of it sparked outrage last year. Flanked by security guards and covered in a white sheet to prevent the hoi polloi from sneaking a peek, the mural consisted of a pair of wings encased in a heart emblazoned with the words “City of Angels” and the words “love” and “art” at its base.

While Deitch detects a growing number of artists who are using street art’s newfound prestige to create brands and cash in, he also supports the talented muralists, taggers and street artists who have become part of the mainstream art discourse.

“Almost every ambitious artist I’ve met, whether they started on the street or went to Yale School of Art, wants to participate in art history,” he says. “Regardless of background, street art gives people a profile and an opportunity to practise their craft. I believe it should be open for everybody.”