Does the imperial collection really include a mirror of wisdom, a sword of valour, and a jewel of benevolence gifted from the gods?

In the world of lost art there are objects that have been clearly documented by reliable sources and that are no longer available to us, their locations currently unknown. But then there is a world of objects that may have existed and may still exist; we simply do not know where. They inhabit the realm of mythical history, a kingdom populated by question marks where belief is optional.

Scholars tend to think that such aspects of mythical history—the legends of King Arthur, for example, or El Dorado, the city of gold—grew from kernels of non-magical fact and truth that were then embellished by oral tradition until they developed into the multifaceted stories we know today. Therefore, there probably was a king whose name became Arthur, he probably had a core of knights, and he probably had a prized sword that may well have been called Excalibur. But the embellishments (and of course, sceptics would say, the supernatural bits) are fictitious. Jesus Christ is one such example. No one doubts that a kind man named something like Jesus of Nazareth lived in the first century AD, preached, developed a following and was executed. That is agreed upon as fact. The rest of the story? It is a matter of faith and personal preference. 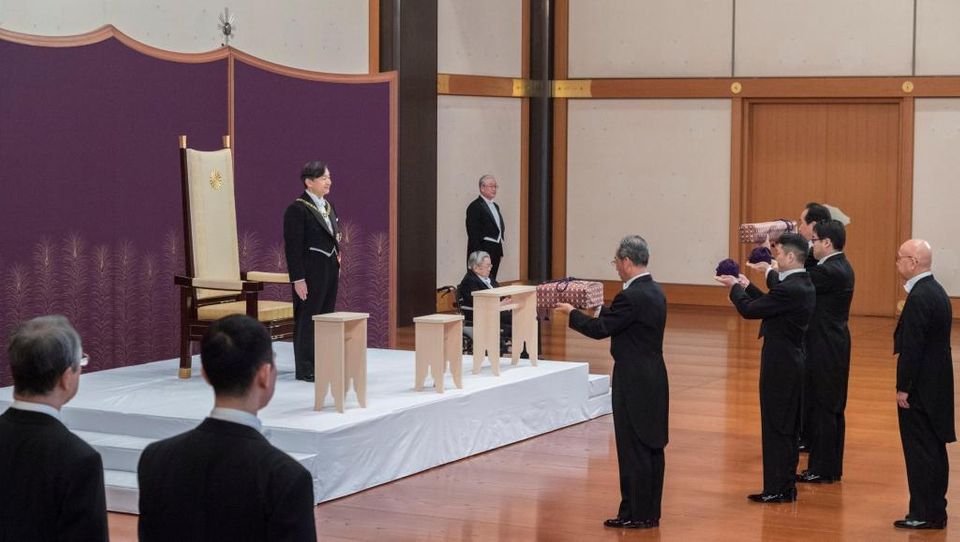 The Treasures of the Imperial Family are presented to Naruhito during the Emperor's enthronement in Tokyo on 1 May 2019 Photo: Imperial Household Agency of Japan

And so it is with the lost art of this month’s column. The Imperial Regalia of Japan, also called the Three Sacred Treasures of Japan, are said to include a mirror called Yata no Kagami (representing the virtue of wisdom), a sword called Kusanagi (valour), and a jewel, Yasakani no Magatama (benevolence). But whether these Treasures exist is an open question, and possibly a matter of faith.

Dating back to AD690, these items are traditionally presented to the emperors of Japan by priests during coronation ceremonies. Tradition also says that they were brought down to earth by an ancestor of the Japanese imperial line, Ninigi-no-Mikoto, after they were given to him by his grandmother, the goddess of the sun, Amaterasu, who sent him down from the heavens to bring peace to warring Japan. Each of the Treasures has its own story. Amaterasu was said to have hidden from her brother, Susanoo-no-Mikoto, taking shelter in a cave and causing the world to grow dark.

The goddess Ame-no-Uzume-no-Mikoto hung the mirror and the jewel outside the cave’s entrance as a trick to draw her out. Amaterasu saw her reflection in the mirror and was startled long enough for the gods to pull her from the cave. To apologise for having driven his sister into hiding, Susanoo presented her with the sword, which he had acquired from an eight-headed serpent called Yamata no Orochi. The first emperor of Japan, Jimmu, Ninigi’s great-grandson, was said to have inherited the treasures from him. They were the physical manifestation of the legitimacy and lineage of the ruler who possessed them.

There are stories of the Treasures having been lost and found, stories that shift depending on who is telling them. A battle was fought on the Kanmom Straits in 1185, when the emperor at the time, Antoku, was only eight. To avoid capture, his grandmother threw the emperor, the Three Sacred Treasures and herself out of a boat and into the sea. The mirror was recovered, but an enemy soldier who tried to force open the box in which it was contained was struck blind. The jewel was later found by divers, but the sword remained lost. Some say that a new sword was forged then, others that only a decoy had been thrown into the water, yet others that the sword rose out of the sea and returned to its shrine through supernatural means. Whatever the fate of the original or the subsequent versions of the Sacred Treasures, they have retained their symbolic power. It is said that when it was clear that Japan would lose the Second World War, Emperor Hirohito instructed the Lord Keeper of the Privy Seal of Japan to defend the Treasures at all costs. 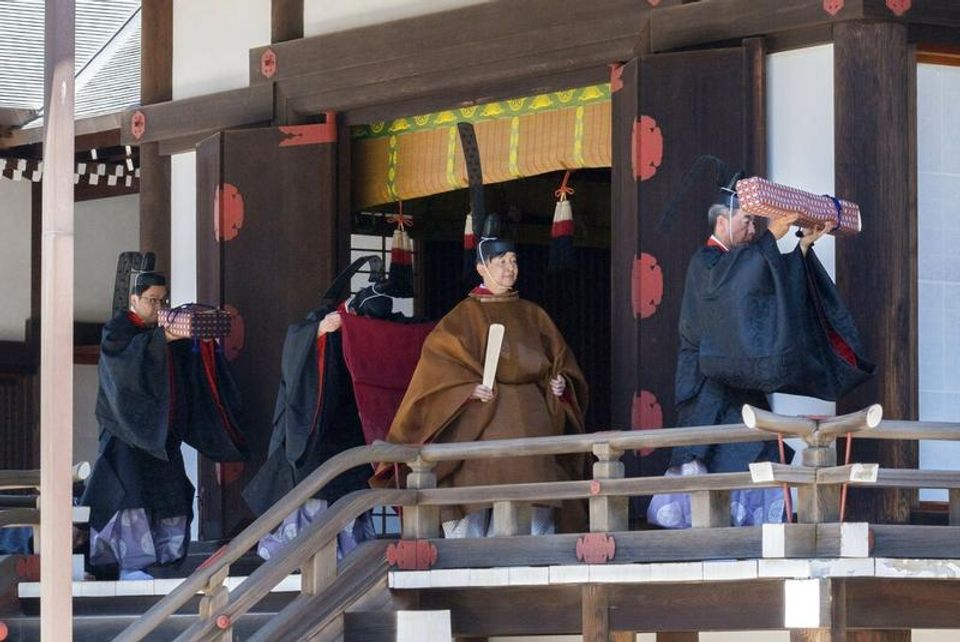 Japan's Emperor Naruhito, centre, walks during a ritual to the sanctuaries at the Imperial Palace in Tokyo after his ascension to the throne as priests carry the mythical sword Kusanagi and jewel Yasakani no Magatama PHOTO: IMPERIAL HOUSEHOLD AGENCY OF JAPAN

Popular belief holds that the three are safeguarded in separate shrines—that Ise Grand Shrine in Mie Prefecture holds the mirror, Atsuta Shrine in Nagoya holds the sword (or its replica), and Three Palace Sanctuaries in Tokyo holds the jewel.

It is forbidden for the public to see the Treasures, so their very existence cannot be proven; they are revealed only to the emperor and selected priests. What was said to be two of the Treasures, the jewel and the sword, were displayed at the accession of Emperor Akihito in 1989, his enthronement in 1990, and his abdication this year, but they were wrapped in shrouds. When Akihito's son Naruhito took up the Chrysanthemum Throne to start the Reiwa era this May, he was also presented with the mysterious Treasures.