The Taddei Tondo has not always been treated as a masterpiece

Michelangelo’s Taddei Tondo­—a masterpiece of his early maturity and the Royal Academy’s great artistic treasure—has moved again. The circular, unfinished marble relief of the Madonna and Child with the infant St John the Baptist, which has quietly occupied a specially designed niche in the Sackler Wing of the Royal Academy since 1991, made the short journey last year to the National Gallery for the Michelangelo & Sebastiano show. There, away from the RA’s rather too-discreet setting—at the end of a long corridor lined with plaster casts—it could literally be seen in a new light. Not only did the Tondo emerge from behind its greenish bulletproof glass to show Michelangelo’s dynamic carving technique in all its stunning detail (thanks to newer glass technology), but the lighting, casting gentle pools of shadow within the relief, crystallised the immense emotional and spiritual power of the narrative. Following the exhibition, the Tondo was freely displayed in another National Gallery context, hanging in a room next to other High Renaissance masterpieces, notably the Leonardo da Vinci Cartoon, which the RA sold to the National Gallery in 1962 for £800,000.

The Tondo was bequeathed to the RA in 1830 by Sir George Beaumont, a talented amateur landscape painter and connoisseur, who had himself acquired it from the French neoclassical painter and collector Jean-Baptiste Wicar while in Rome. Wicar was not only a major collector of Michelangelo’s drawings, but also the man in charge of Napoleon’s expropriation of works of art from Italy, France and the Austrian Netherlands for France’s museum collections. He no doubt used his situation to procure the Michelangelo for himself—he claimed he purchased it in 1812 directly from the Palace of Taddeo Taddei in Florence, where it first hung—and then sold it to the enamoured Beaumont at a price that was considered well over the odds. The great sculptor Antonio Canova helped to broker the sale and organise its packing for its trip to England. Once installed in Beaumont’s “bolt hole” in Grosvenor Square, London, the Tondo became “the chief talk of all artists”, as the painter David Wilkie enthusiastically reported, while the sculptor Fuseli purportedly tried to restrain his fellow sculptor, Mrs Damer, “from finishing it”. Wilkie made a sketch of it, and it was also sketched by John Constable on the occasion of its arrival at the Royal Academy in 1830, following Beaumont’s death. Beaumont had stipulated in his will that the Tondo should be left to the institution that he so admired. Michelangelo’s great marble—weighing 350.75kg—was subsequently delivered to the RA, then located at Somerset House, at the cost of £1. 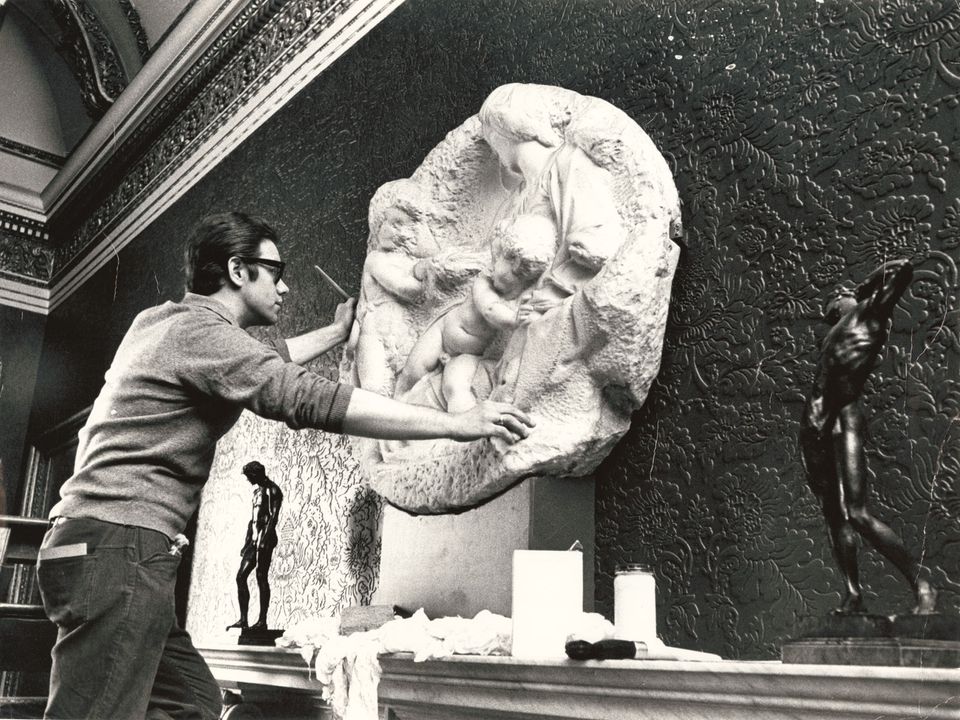 The Tondo has only been loaned by the RA twice in its history (the only other occasion was in 1966, to the Victoria and Albert Museum), although it has moved within the RA during its 188 years. Now it takes pride of place in the new Collection Gallery, curated by the RA’s president, Christopher Le Brun, and designed by Adrien Gardère, where it canonce again be seen in the company of copies. Hung at the gallery’s north end, with windows either side, it forms the climax of a vista flanked by Giampietrino’s 16th-century copy of Leonardo’s Last Supper on the left side, and three of James Thornhill’s copies of the Raphael Cartoons on the right.

Le Brun wanted to put Michelangelo back in the triumvirate of the great High Renaissance masters. In a sense, this is a teaching of the academy’s approach: showing the masters whom the early Academy cited as the great exemplars of how to create great narrative dramas both in colour and in stone.