The cost of producing crowd-pulling shows can outstrip the cash they bring in. Here are some of the downsides of being just too popular

Blockbusters are often seen as a simple marker of success: the more visitors, the better. Earlier this year 30,000 free tickets to the Louvre’s once-in-a-lifetime display of works by Leonardo were snapped up in just three hours by those desperate to catch the final days of the Paris exhibition—even if it meant opting for a 3am viewing. And already, thousands have turned up to see Tutankhamun’s treasures in London, despite the hefty £31 full-price entry fee. As we went to press the show, which was due to finish in May, was closed until further notice due to the Covid-19 pandemic. Even so, it may still achieve record attendance. Yet despite the public’s enthusiasm for blockbusters, there are downsides. From spiralling insurance costs to visitors with two left feet, we look at the perils that come with being just too popular.

Over the past two years, France has experienced some of its worst strikes and protests in decades because of the government’s plan to reform the country’s pension scheme. But when staff at the Bibliothèque Nationale de France (BNF) called a one-day strike in November, it was for a different reason. Their beef centred on the unexpected number of diehard fans of the Lord of the Rings and The Hobbit who descended upon the BNF to see Journey to Middle-Earth, a 300-piece exhibition on J.R.R. Tolkien that included everything from the author’s work notes to designs for the books’ dust jackets. The throng was so great that library executives were forced to operate ticket booths to shorten the 90-minute queues, according to the Times newspaper. Staff also objected to the impact the Tolkienites had on researchers using the library. The BNF had planned for 80,000 visitors—that number had swelled to 135,068 by the time the show closed on 16 February.

Similarly, overcrowding at the Louvre led reception and security staff to go on strike in May last year. They argued that the world’s most-visited art museum, which welcomed 9.6 million people in 2019, was “suffocating” from a 20% rise in the number of museum-goers over the past decade.

Fake tickets and ticket touts are no longer headaches just faced by concert lovers, theatre aficionados and sporting enthusiasts. Museum-goers are increasingly fallen victim to bogus websites that trick them into paying inflated prices for tickets to some of the world’s most-visited museums. In February, the perennially popular Uffizi gallery in Florence, which had 2.4 million visitors in 2019, won a US court case against a company that had registered several websites with “uffizi” in their domain name. After the ruling, the museum’s director, Eike Schmidt, said: “We have delivered a devastating blow to the web’s bloodsuckers who have been exploiting our heritage illegally and in bad faith for years like parasites, depriving the community of resources.”

Blockbuster exhibitions are also a target for forgers. London’s Victoria and Albert Museum had to contact police in 2013 when staff detected around 50 “good-quality” fake tickets to its sold-out David Bowie exhibition. The tickets had been bought online.

And according to a report by the Arts Management and Technology Laboratory at Carnegie Mellon University, Pittsburgh, staff at the Cleveland Museum of Art, which does not have an entrance fee but does charge for special exhibitions, noticed that in 2016 a single person had bought hundreds of tickets on its website. Believing the person intended to resell them at a higher price, museum officials contacted the buyer, asked for the tickets to be returned, and offered a full refund to send a message that such behaviour “was unacceptable to the organisation”. 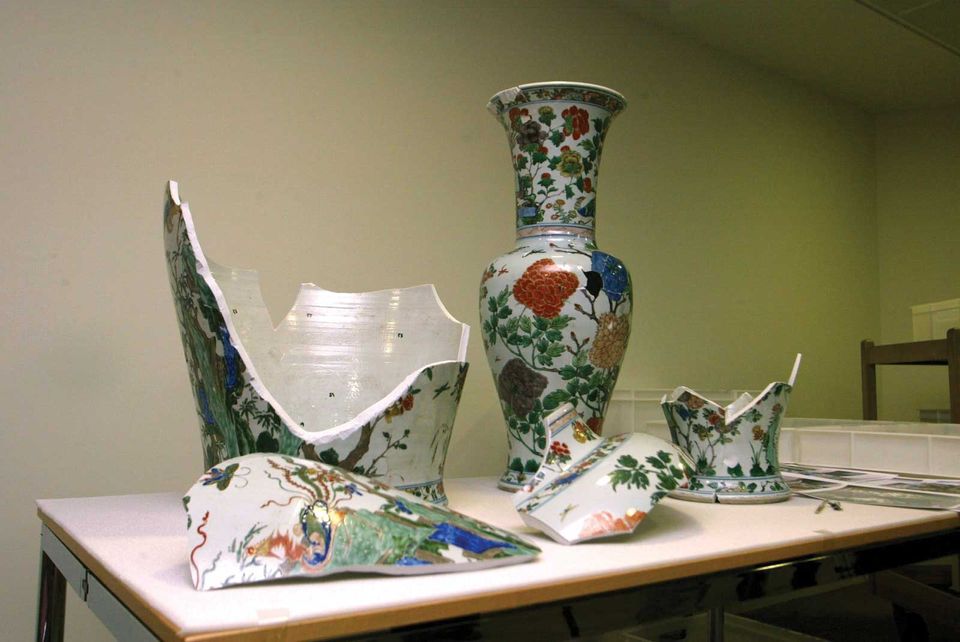 Qing Dynasty vases were broken by a hapless visitor to the UK's Fitzwilliam Museum, Cambridge Photo by Ian McCarney/Shutterstock

Although museums do their best to prevent works of art from being damaged—deliberately or accidentally—the bottom line is, it still happens. Last December, a man attacked and ripped a Picasso canvas at Tate Modern—the second most-visited museum in the UK in 2019 (6.1 million).Who can forget the slapstick scenario in which a visitor with a loose shoelace tumbled down the stairs at the UK’s Fitzwilliam Museum, Cambridge, taking three 17th-century Qing Dynasty vases worth £100,000 with him? In 2017 a visitor to the Hirshhorn Museum in Washington, DC took one step too many in their quest to take the perfect selfie and broke a Yayoi Kusama dotty pumpkin during the popular Infinity Mirrors exhibition.

Sometimes being popular just isn’t all that it is cracked up to be.

When Rembrandt doesn't pay off: a case study from Leiden

Rembrandt's Self-portrait in a cap (1630) © Ashmolean Museum, University of Oxford

From an outsider’s perspective, staging an exhibition on Rembrandt in the Dutch Master’s hometown on the 350th anniversary of his death sounds like a museum director’s dream come true—a free pass to a huge financial windfall. But for Meta Knol, the director of the Museum De Lakenhal in Leiden, the experience led her to conclude that blockbusters are not sustainable, especially for a mid-sized city museum such as the Lakenhal. For starters, the insurance costs for Young Rembrandt: Rising Star were €280,000—a whopping figure for the museum, especially in the Netherlands, where the government does not guarantee the policy for insurers. “It was 25% of the overall budget. We needed to sell 37,000 tickets just to cover insurance,” Knol says.

The high insurance costs, together with other trappings of blockbuster exhibitions, such as expensive media campaigns, required the museum to tack on an extra €7.50 to the €12.50 museum entrance fee, something that did not sit well with Knol. “There should not be a financial barrier to seeing [an exhibition]; they should be available to everyone,” she says.

Overcrowding was also an issue. Ahead of the show’s opening, the museum had completed major renovation and expansion project. Before the building works, the museum had around 55,000 visitors a year: “We had the same number in just three months during the Rembrandt exhibition,” Knol says. The flood of visitors also prompted other costs: the museum had to build a temporary cloakroom, for example.

In the end, the museum was out of pocket. “People assume that blockbusters always make money, but that isn’t always the case,” Knol says. “We were hoping to get more visitors to cover our costs, but we didn’t. But if more people came, the joy of looking at the works of art would be at stake… it’s a Catch-22.”