With the Louvre revealing its virtual reality Mona Lisa, museums ponder the power of tech experiences

Virtual reality (VR) in museums and galleries has reached a fork in the road. On the one hand, it is increasingly being adopted by museums for education and entertainment; on the other, smaller non-profits are pushing artists to test the potential of the technology while it is still nascent. Underlying both strands are questions around the practical limitations of the hardware and a reliance on tech companies’ money and resources.

The Musée du Louvre’s first foray into VR, Mona Lisa: Beyond the Glass, wants visitors to look afresh at the world’s most famous painting. Produced in collaboration with HTC Vive Arts to accompany the blockbuster Leonardo da Vinci exhibition that opened in October (until 24 February), the seven-minute digital experience plays on the hype that has prevented the real Mona Lisa from leaving its permanent gallery at the Paris museum to join the more restricted temporary spaces downstairs. 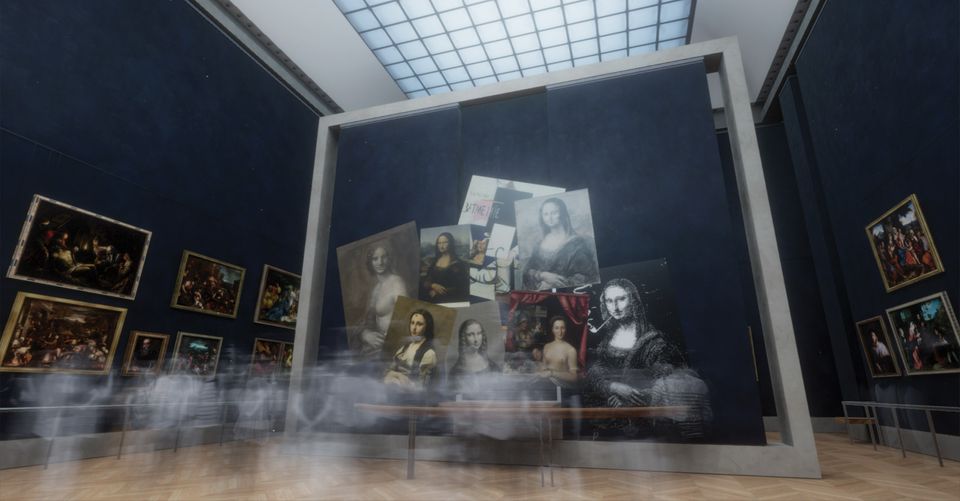 The opening scene is all too familiar: Leonardo’s painting appears as a distant postage stamp obscured by a glass vitrine and crowds of visitors (22,500 people file through the Salle des Etats every day to see it). “It’s hard to feel close to her with all these people around,” the voiceover observes. The ghostly bodies in the room dissolve as the narrator promises to show us “the woman inside the painting” and explain “exactly what makes the Mona Lisa a masterpiece”.

HTC first approached the Louvre about a potential VR experience “about three years ago”, before the Taiwan-based electronics company formally launched its “multi-million-dollar” Vive Arts programme for cultural partnerships in November 2017, says Victoria Chang, the initiative’s director. The process took “a long time, for a tech company”, she says. “But for a museum, three years is nothing.”

“VR is not a gadget—something that you can do in one week,” says the head of the Louvre’s interpretation and cultural programming department, Dominique de Font-Réaulx. The curatorial contribution was “enormous”, she explains, with the two curators of the Leonardo show consulted on every visual detail, from the hairstyle of Lisa del Giocondo to the panoramic Italian loggia in which she sits. (The Mona Lisa was in fact the Louvre’s second choice for the VR treatment; it had initially wanted to use Leonardo’s The Last Supper mural until it became clear how much technical and historical information was needed to render the work in three dimensions.)

The museum is presenting the experience on 11 HTC Vive Cosmos VR headsets on loan from the company (which sell for $699 each) and installed in a side gallery to the Leonardo exhibition, while an extended version will be available for those with their own VR headsets to download for free at home even after the show closes.

In a bid to engage audiences that might never come to Paris, the Louvre hopes to tour the installation to “museums, but not only museums” elsewhere in France and abroad, De Font-Réaulx says, adding that officials are open to developing more VR experiences in future. “It’s a wonderful tool because it links accurate information on the works of art with imagination.”

Virtual reality and augmented reality (AR)—which overlays digital elements on the real world rather than creating a fully immersive alternative—are “unbelievably promising” for the future of communication, says Daniel Birnbaum, who left his post as the director of the Moderna Museet in Stockholm to lead the London-based VR and AR production startup Acute Art early this year. But he points out that major museums such as the Louvre have concentrated on the educational uses of the technology, neglecting its own potential as an artistic medium.

Such reluctance is in part a practical response to the often clunky and pricey hardware, which also requires staff to supervise its use in a museum environment. “It’s simply not so easy to show [VR] to huge audiences,” Birnbaum says. “A successful show has 250,000 people—how would you actually do that?”

Yet the failure of such products to reach critical mass in the global marketplace also offers cultural institutions an “opportunity to experiment” through the partnership model, argues Ben Vickers, the chief technology officer at the Serpentine Galleries in London. In projects harnessing VR, artificial intelligence and, increasingly, AR, the Serpentine has sought to “work with artists so that they can shape the narrative and the potential of these advanced technologies before mainstream adoption”, he says.

After six years of “new experiments ​in art and technology”, the gallery is now preparing to share its discoveries with the wider art world, compiling a report on the intersection of the two fields that is due to launch in spring 2020. The looming question is the role of big tech, Vickers says. “If we globally are having a power shift and companies are starting to manifest their own cultural projects, what does that look like in 20 or 30 years’ time?”