The Sistine Chapel is coming to London this month. And while it may not be the Renaissance original, the effort exerted to resurrect Nam June Paik’s 1990s technological twist on Michelangelo’s masterpiece makes this feat no less impressive. The late Korean-American’s “video chapel” is being reconstructed for the first time in nearly three decades for a major touring retrospective on “the father of video art”. The exhibition is due to open at Tate Modern on 17 October before travelling to the San Francisco Museum of Modern Art (SFMoMA), which co-organised the show with the Tate, and then to the Netherlands and Singapore.

Last shown in the German pavilion at the 1993 Venice Biennale, Sistine Chapel (1993) is a large-scale installation comprised of 40 video projectors beaming overlapping images of graphics and noted personalities, including the artist Joseph Beuys and the rock star Janis Joplin, in rapid-fire succession. Hans Haacke dominated the pavilion’s central space with a celebrated installation that smashed the marble floor installed under the Nazi regime, while Paik commandeered the building’s wings and grounds. Sistine Chapel filled one of these side areas. The pair won the Golden Lion for the joint presentation, though Haacke’s smashed pavilion floor attracted most of the headlines. 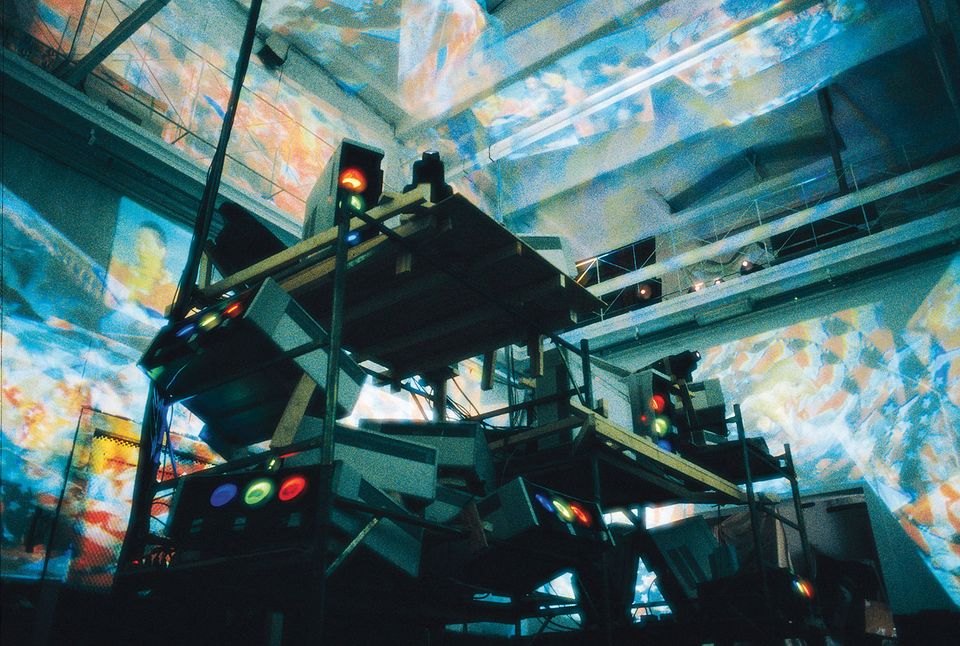 Another of Paik’s video pieces from the 1993 Venice Biennale is due to be auctioned at Christie’s Unicredit sale on 5 October (Anonymous Crimean Tatar who Saved Life of Joseph Beuys—Not yet Thanked by German Folks (1993); est £160,000-£240,000), while Gallery Hyundai is showing works by the artist at Frieze London and Frieze Masters.

Until now, Sistine Chapel has existed in the artist’s estate as four videos and two modified video switches, says the associate curator Valentina Ravaglia, who worked on the show with the co-curators, Sook-Kyung Lee of the Tate and Rudolf Frieling of SFMoMA. Frieling says it takes the might of a major retrospective to be able to pull off a project like this. “It takes a village; it’s not something you can just deliver and place.”

Paik, who died in 2006, did not leave instructions on how to reconstruct it, probably, Ravaglia says, because he never expected it to be restaged: “I don’t think he thought of it as a portable work.” Indeed, installing the piece in Venice was so taxing on Paik’s team, who had to haul 40 heavy projectors up onto scaffolding erected several metres above the floor, that the artist paid for each crew member to have an extra egg for breakfast each morning.

Only a few grainy photographs of the original installation exist, including one in Frieling’s personal archive; before he swapped his journalist hat for a curator’s cap, he interviewed Paik at the Biennale for a German television station.

In the absence of Paik and extensive documentation, the curators turned to John Huffman, the curator of the artist’s estate and one of Paik’s long-time studio assistants. He provided a map of the projected images, complete with the desired sizing and overlap, and then curators and conservators worked with the specialist contractors ADI to determine where each video projector needed to sit. 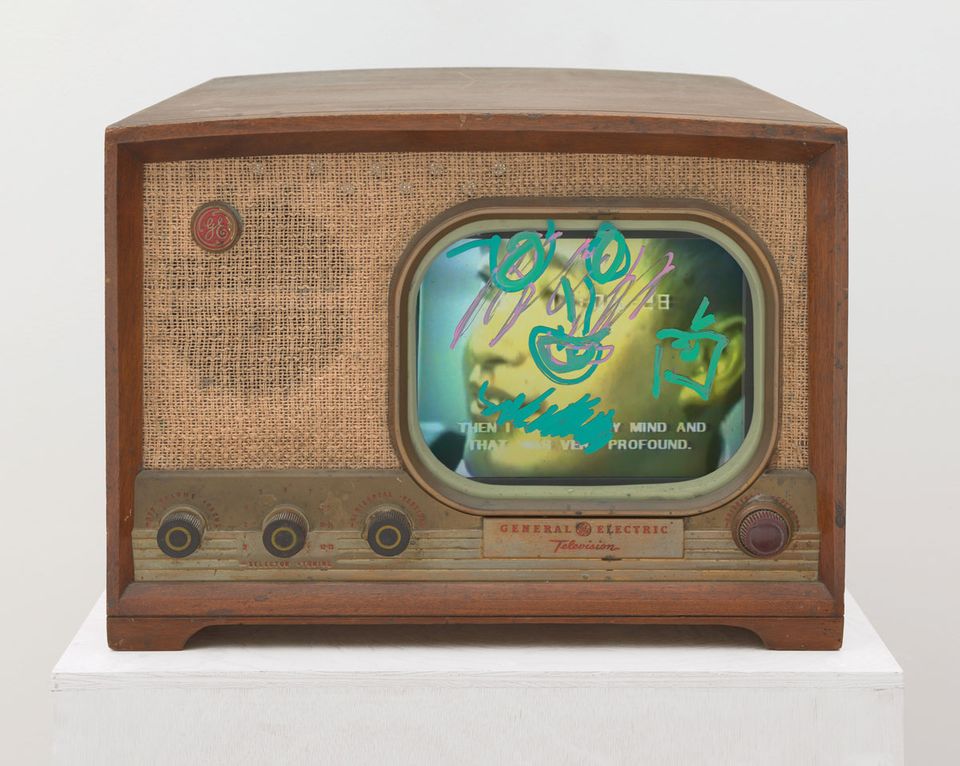 Like Paik’s early TV works, many of the projectors he used for the original installation featured cathode ray tubes (CRTs), which manufacturers no longer produce and so are becoming difficult to source. But Ravaglia says Paik’s decision was mainly motivated by convenience. “It really didn’t matter to him that they were CRT projectors; he just needed ones he could buy in bulk,” she says. Video projectors, especially the old behemoths Paik used, produce a lot of heat so one can only imagine the temperature in the German Pavilion during the height of summer. But the Tate curators decided against whittling down the number of projectors to just ten, choosing instead to use slightly smaller and lighter ones.

One of the main challenges faced by time-based media is the obsolescence of technology. “It’s an ongoing whack-a-mole problem,” says the media conservator Dan Finn from the Smithsonian American Art Museum (SAAM) in Washington, DC, which houses the Nam June Paik Archive. For this reason it is vital that museums “document the artists’ intent, and become comfortable with a notion of ‘the work’ as not just one thing, but as a concept and experience that might manifest differently over time,” says SAAM’s time-based media curator Saisha Grayson.

With Paik, it is his frequent use of CRT TVs and monitors that causes the most difficulty. “No one makes glass [cathode] tubes anymore. It’s a dying technology and so it’s a big source of anxiety within the field,” Finn says. When CRT monitors were new, technicians had developed a way to repair broken tubes, but this knowhow was lost. The good news is that experts are working to revive this skill.

Early on, the Tate called recycling centres around London, asking for old CRT TVs because the institution’s stockpile of equipment was not big enough to support such a large exhibition of video works. Ravaglia admits it is not an ideal way to collect material: “We’d go collect them to find that they looked like a bird bath with pools of water inside the ring where the screen used to be. Only 2% worked.” Finding the right colour and size can also be problematic. “We obviously didn’t want the silvery ones or those shaped like Darth Vader’s head,” she says. The small, five-inch CRT TVs, like those Paik used to create some of his famous robots, are the hardest to source. 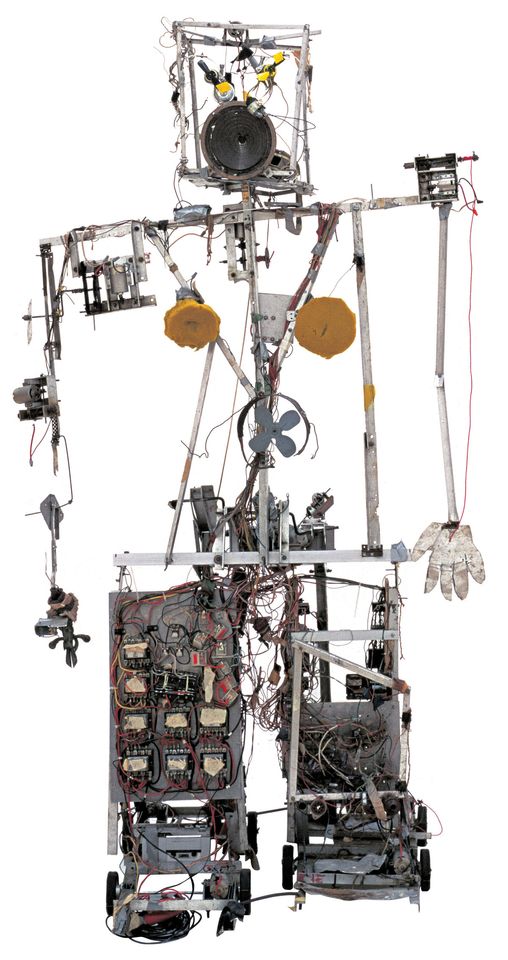 Fortunately for today’s curators and conservators, Paik was acutely aware of the obsolescence of technology and had already begun to replace CRTs with LCD screens in some works. Huffman reassured the Tate curators that they should not be beholden to the authenticity of the medium because Paik would be the first not to care. “He constantly transmitted and translated images and formats from one medium to another, which gives curators some licence to make decisions that might seem counter-intuitive,” Ravaglia says.

Many are still uncomfortable with changing the original monitors, however. “Museums try to use CRTs because of the sculptural element to them. The screens are curved, and the image quality is warmer. LCDs are flat and the images are sharper,” Finn explains. In an effort to preserve the all-so-important curve of old TV monitors, Finn has considered bending flexible LCD screens over the original glass ones.

Many curators dream of presenting rarely exhibited works to see if they still resonate, and Frieling is no different. “If you think about it, how many actually saw Sistine Chapel? It was shown in Italy two generations ago.” He acknowledges that its restaging took a lot of time and resources but, then again, “restoring the Sistine Chapel in Rome would take a lot of resources also”.

A year of viewing art virtually: the best and worst AR and VR work created during the pandemic

A year of viewing art virtually: the best and worst AR and VR work created during the pandemic

Pared down and profit sharing: here are the sales from Art Dubai, this year’s first physical fair

Pared down and profit sharing: here are the sales from Art Dubai, this year’s first physical fair

A Roman Raphael: how scholars view the Old Master at 500

A Roman Raphael: how scholars view the Old Master at 500