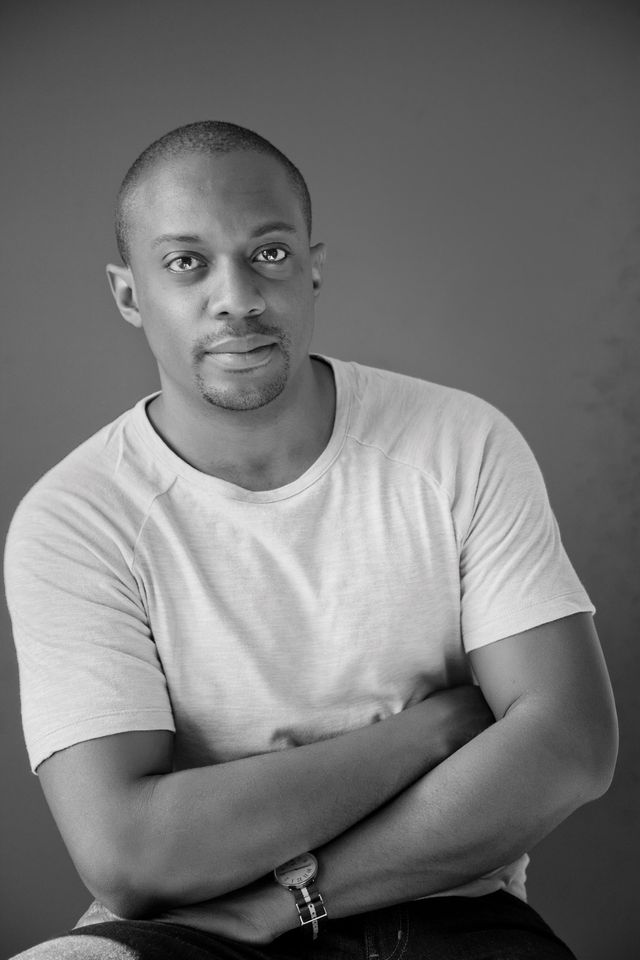 Hank Willis Thomas is making some of the most urgent, timely art in the US. With a knack for adopting popular icons and signs, whether in the form of sporting imagery or memorable photographs of historic events, he takes on key issues, including racial injustice and gun violence, and the historic events underpinning them, like colonialism and slavery, as exemplified in his photographic series Strange Fruit (2011). His work assumes numerous forms – from photographs and video to public sculpture – and the breadth of his work is reflected in his first-ever museum survey, which has just opened at the Portland Art Museum in Oregon. Meanwhile, he has an array of public projects being unveiled this year­—on the High Line in New York and at the foot of the Brooklyn Bridge—and next, in Boston and Seattle.

The Art Newspaper: Mass shootings in US cities like Gilroy, El Paso and Dayton are on the rise. Can you talk about your commissioned work on gun violence at the Portland Art Museum?

Hank Willis Thomas: There are beautiful memorials to presidents and to victims and fallen soldiers of foreign wars on the Washington Mall. Here in New York, we have World War I and World War II memorials, and we have yet to have a memorial for the American soldiers and civilians who died in the wars in Iraq and Afghanistan, where we lost nearly 10,000 American soldiers in the past 20 years. During that same time, more than 200,000 people have been shot and killed in this country. And there is no discussion about how to memorialise the lives of American citizens who fall victim to weapons of war at home.

Since my cousin, Songha Willis Thomas, was murdered as a victim of gun violence in 2000, I’ve been asking myself: “How do you measure life? How do you memorialise life?” The Portland commission is a flag-based work, where each of the 14,719 five-pointed stars commemorates a person who died from gun violence in 2018. These stars represent our American mythology and iconography.

The number of fatalities from military weaponry in the US is staggering. How can you bring increased awareness and humanise the problem?

MASS Design Group and I have been thinking about how you conceptualise and build a national movement to honour the victims of gun violence. I worked with the design group on Brian Stevenson’s Equal Justice Initiative, and the National Memorial for Peace and Justice in Alabama. Brian’s call to action is: “This is an American tragedy, and a very integral part of American history, and we need to have a place to come to terms with it.” So we’re building on that idea, and we’re piloting a potential national memorial. We’re working with the organisation, Everytown for Gun Safety, which has been collecting objects from family members of those who’ve been shot and killed. The objects are put into glass bricks that have been used to make four glasshouses. The installation is travelling to the National Building Museum in Washington, DC in 2020. 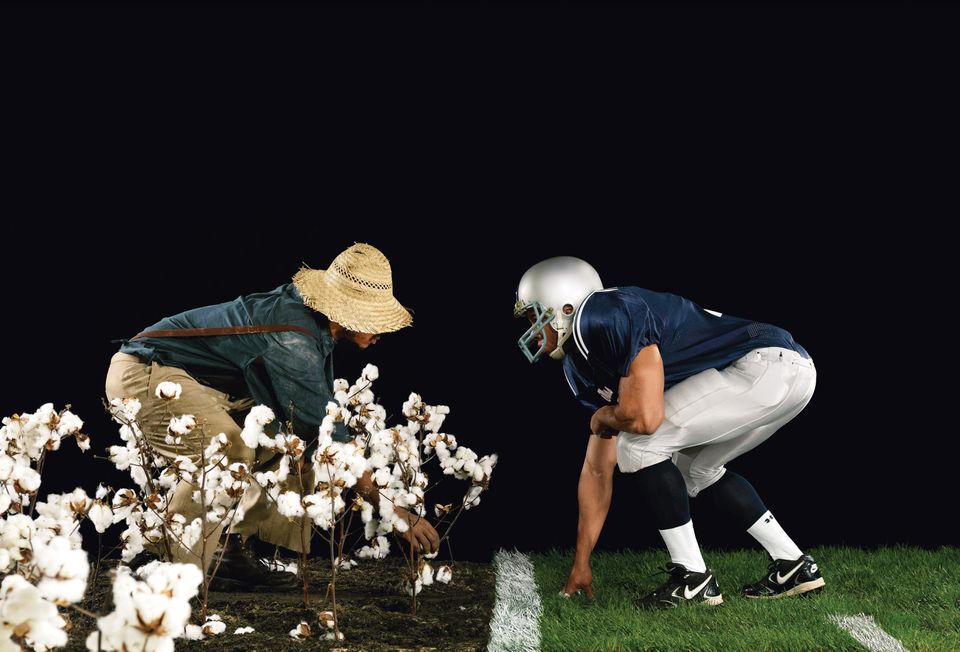 The Cotton Bowl, from the series Strange Fruit (2011) Courtesy of the artist and Jack Shainman Gallery

The Gordon Parks Foundation awarded you a 2019 fellowship that supports artists working with themes of social justice and representation. What images from the foundation’s archives are you working with?

I grew up at the Schomburg Center for Research in Black Culture in Harlem, where my mother was the curator of photography, and also at the Smithsonian’s National American Museum Project, and I interned at the National Museum of American History twice when I was in high school. The legacy of Gordon Parks is everywhere. Gordon Parks stands out because he was an outlier for a generation of African Americans. He was able to build a career in Chicago as a fashion photographer and travel the world for Life magazine, and be employed by the US government with the Works Progress Administration, but also to be the first African American to direct a major Hollywood film.

He directed Shaft in 1971, but I’m looking at his 1969 film, The Learning Tree, based on a book that he wrote about his life as a young black man living in Fort Scott, Kansas. Through my research, I learned that the first Great Migration of African Americans from the south following the Civil War was not to the north but to the west. They migrated to places like Kansas and Nebraska and Oklahoma. I’m weaving some of the film-set photography together with images of migrants who travelled during the 1879 Exodus and were known as Exodusters.

Did you have a relationship with Gordon Parks?

Your Punctum sculptures are powerful reminders of radical acts of rebellion. Where did you find the source material for Resistance (Leopard Man Punctum) (2019)?

Colonial Africans suffered rape, abuse, murder and pillaging, and in reaction secret societies were formed as a type of rebellion. I like to call them African Ninjas because they would sometimes do what we would think of as horrible things, assassinate people and intimidate people, but they also worked to disrupt the incredible oppressive force of colonialism. Most of what we know is inspired by an article in Popular Science magazine in 1943. The sculpture is based on a rendering of a famous work in Belgium of a leopard man preying on a person who’s a colonial collaborator. In a later movie, Tarzan and the Leopard Woman (1946), the actors are clearly Europeans. Most of our interpretations of African popular culture are filtered through European mythology about Africans, and it has nothing to do with Africans at all. 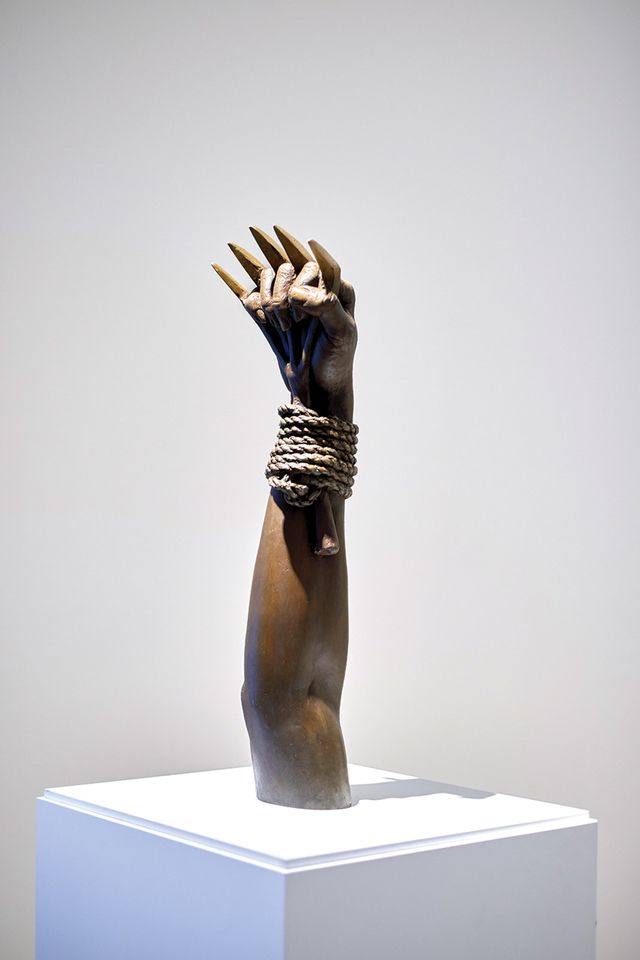 Resistance (2019) Courtesy of the artist and Maruani Mercier Gallery

You’ve mentioned that the claws may have been an inspiration for Wolverine and other superheroes.

You can’t help but think there was some influence since these movies were being made, and these books were being written between 1916 and the 1940s. Jack Kirby and Stan Lee were kids at that time and were reading fantasy novels. Is it possible that Black Panther or Wolverine may have been inspired by the books they read and the movies they saw as children? It’s impossible to believe that those ideas were not there. If it’s all mythology, like most of what we know about Africa is, then why can’t we embrace it and start to tell different stories?

Most of the beauty of the Black experience in America is the incredible joy and vibrancy that lives in the spirit and the soul, in spite of all that’s been done to crush it. I think my mom’s work, where she’s been looking at photographs taken by African Americans since the dawn of photography, shows the other side to the story rather than the story that was put out there.

You’ve used the field of sports to highlight Black excellence. Joel Embiid, an NBA player from Cameroon, modelled for Unity (2019), a monumental sculpture to be installed later this year at the foot of the Brooklyn Bridge. Would you say there is a link between sports and politics?

People sometimes say sports are not political, but if you really think about it, sport is a global industry that intersects with everything from mining to farming to development to urban planning to college and universities, to legal policies around health. What would America be if it weren’t for Jim Thorpe, a Native American Olympian who helped put the American spirit on the map on a national stage? Or Jesse Owens or Wilma Rudolph or Billie Jean King? If you’re not going to allow me to excel in school and in business, and I can play this game, I’m going to play it better than anybody else, and I’m going to try harder than anybody else.

Public sculptures like Unity (2019) and The Embrace, a commission for the Boston Commons honouring Coretta Scott King and Martin Luther King Jr, offer positive, uplifting messages. How do you want to activate the public space with these works?

I think public art is propaganda, frankly. Most of the public art we grew up around was white men on horses looking down on us. The question of the day is, how do we imagine new public art? A new way of championing the spirit of people who we find inspiration from – athletes, activists, yes sometimes maybe soldiers. But we have so many memorials for war and so few for peace. That can’t be by accident, and it’s not sustainable for our psyche.

Do artists have a role to play as civic leaders by engaging a broader public?

I see art, history and politics in everything. For me, artists are civic leaders. It also depends on who you call an artist. My grandmother was a beautician. That’s an art form. Cooking is an art form. I try to encourage people who don’t see themselves as artists to think creatively. Projects like the Truth Booth, Question Bridge and For Freedoms [see key works box] invite members of the public who don’t see themselves as artists to collaborate in the creative process. 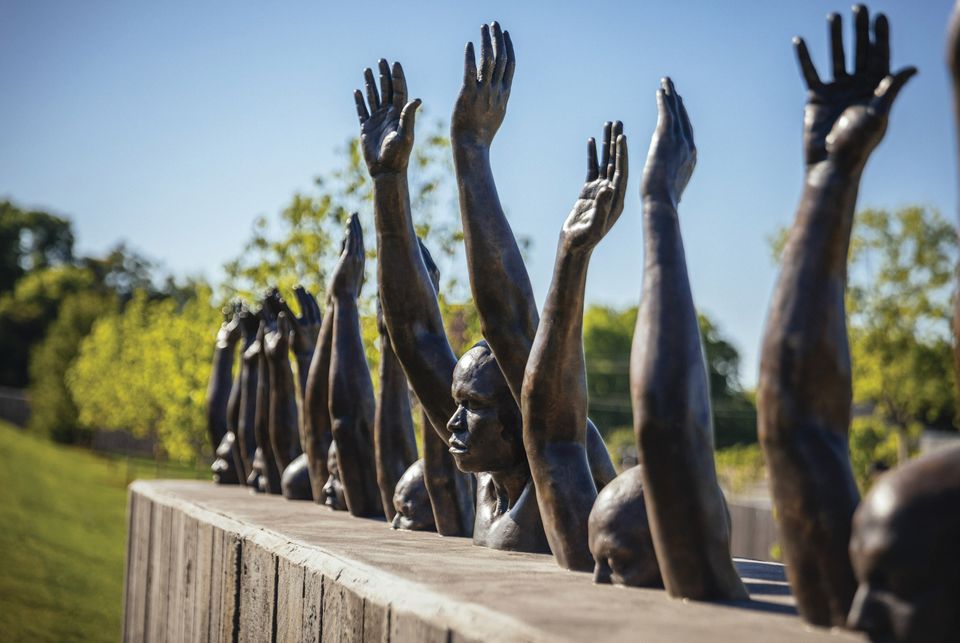 Raise Up (2014) Courtesy of the artist and Jack Shainman Gallery

The monumental bronze and cement sculpture is based on a photograph by Ernest Cole of 13 South African miners as they undergo a humiliating group medical examination in the nude. The piece is permanently installed on the grounds of the National Memorial for Peace and Justice in Montgomery, Alabama, a site dedicated to the legacy of slavery and mass incarceration. It stands as a reminder of police brutality and racial bias in the US criminal justice system.

Inspired by Norman Rockwell’s 1943 series of paintings representing an idealised version of American life, Thomas, together with the photographer Emily Shur, updated the imagery with a more representative picture of American diversity. Rockwell’s paintings were based on President Franklin D. Roosevelt’s wartime speech outlining four essential rights: freedom of speech, freedom of worship, freedom from want and freedom from fear. The works are part of a larger artist-run platform called For Freedoms, launched by Thomas and Eric Gottesman in 2016, that promotes civic engagement through Town Hall meetings, exhibitions, billboard campaigns and artist residencies.

This 20-panel work is based on Civil Rights-era protest signs. Each painting offers a variation, such as, “I Am 3/5 Man”, “You The Man,” and, in the final canvas, “I Am. Amen”—a declarative statement of power and agency. According to Thomas: “I was amazed that just eight years before I was born, it was necessary for people to hold up signs affirming their humanity.”