Harold Ancart on the art of handball 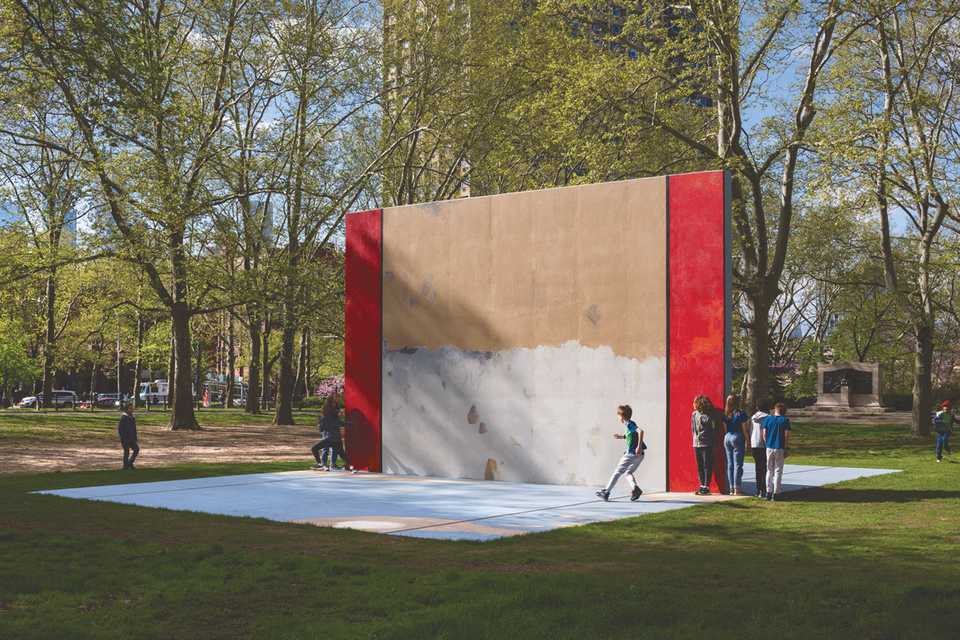 The familiarity of handball courts in parks and playgrounds across New York City can render them almost invisible. But seen through the eyes of Harold Ancart, an artist and immigrant who first encountered them after moving to the city from Brussels in 2007, these free-standing concrete walls are tableaux of beauty and fascination.

“The parallel between this vernacular phenomenon and historical abstract painting is remarkable,” says the 39-year-old painter, as he flips through Xeroxed photographs of some of the city’s 2,000-plus handball courts. With their many coats of slightly mismatched paint patching over areas of graffiti or damage and the patterns of wear from the rhythms of the game, these chance compositions echo abstractions by artists such as Mark Rothko, Kazimir Malevich and Adolph Gottlieb.

For his first public project in the US, which opened on 1 May and was commissioned by the Public Art Fund, Ancart has created an homage to these found works of art. Located in Cadman Plaza Park in downtown Brooklyn, Subliminal Standard is a 16ft-high concrete wall bisecting a concrete floor. Ancart has painted all four vertical and horizontal planes of the wall and base, evoking the game’s lines of play as well as presenting his own slightly surreal riff on handball’s naturally occurring abstractions. 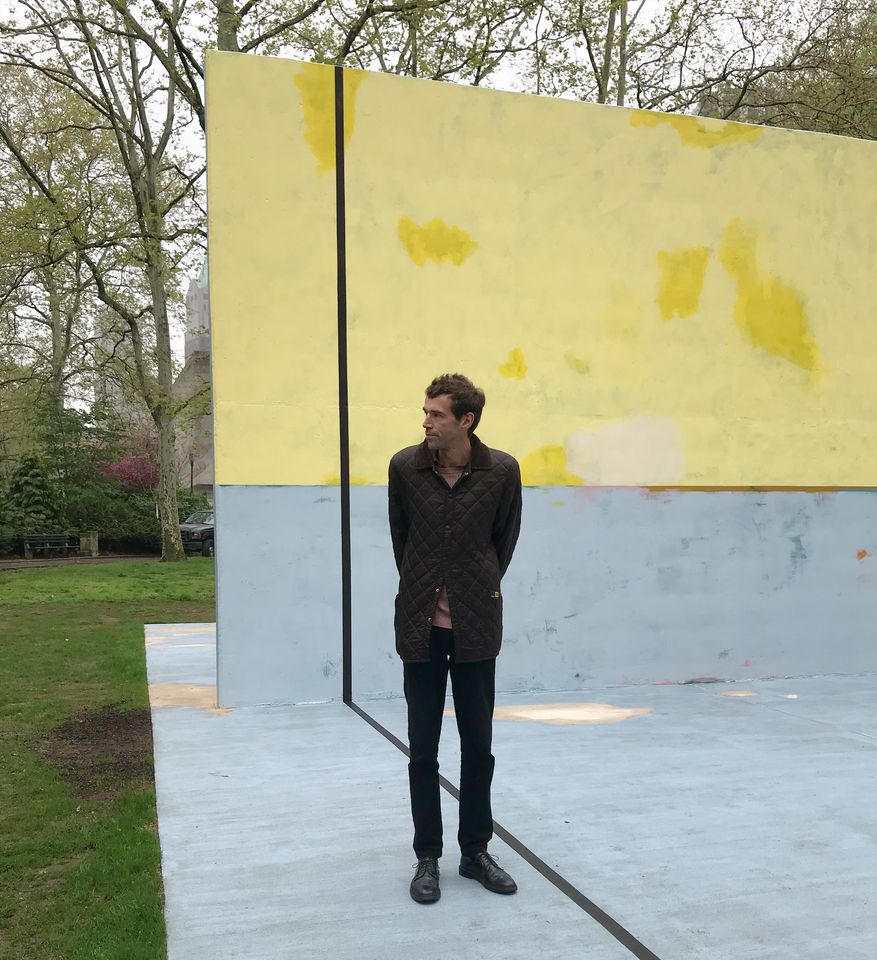 “I hope it’s going to be a contemplative object that is just going to come out of nowhere,” says the artist. On one side, molten red vertical bands at the two outer edges frame a lower half of snowy white and an upper expanse of beige, all dappled with smudgy purplish patches of paint and the glancing shadows of nearby trees. The implied landscape on the flip side sparkles more radiantly, with a grey-blue ground set against a blotchy yellow sky. A ghostly block of white hovers on the horizon line like a distant mountain or iceberg.

A month before beginning to paint in the park, Ancart had not predetermined the exact palette or composition and wanted to maintain an improvisational attitude onsite. “There are so many possibilities, it’s endless,” says Ancart, who typically paints in oil stick and has tested for a more durable paint for concrete. His Brooklyn studio is filled with models painted in a range of colour combinations, from austere to Day-Glo. These have been exhibited at the Independent art fair and at Clearing gallery in Brooklyn, which jointly represents the artist with David Zwirner.

Daniel Palmer, an associate curator at the Public Art Fund, likens Ancart to an athlete who may have a game plan but stays nimble on the field. “If he were to use an exact small-scale model, it could feel like an approximation,” says Palmer. “He needs to respond to the structure and shadows, the way the light’s hitting.”

“When it comes to painting,” says Ancart, “the only thing that matters is the outcome, but the outcome is also what you should never think of while you paint.”

The public will be free to engage with the results as they wish. “People will see immediately it’s not a regulation court so they might play a modified version of handball,” says Palmer, noting that the game was originally invented by immigrants who poured the concrete for many of the city’s courts during the Great Depression and often congregated in these democratic social spaces. “But I think it would be really beautiful if someone uses it as a bandstand or has a dance performance on it, or kids kick their soccer ball against it or play tag against it.”

Ancart has become recognised for his paintings of icebergs, campfires and plants, rendered strange and monumental in isolated masses of unnatural colour. At Zwirner’s booth at Frieze New York, he is presenting his latest paintings of a single matchstick, towering like a lamppost against a Venetian sunset or a craggy Clyfford Still-like terrain. “The structure of the match itself is spectacular,” says Ancart, who approaches the subject serially as Monet did his Haystacks or Warhol his portraits of Marilyn Monroe. “When this super-simple structure repeats, it allows you to mess around as much as you want after that.”

The son of an antiques dealer, Ancart describes being a poor student at school, who excelled only at drawing and roller skating. In 2007, he received his master of fine arts degree at the École Nationale Supérieure des Arts Visuels de la Cambre in Brussels and, feeling there were limited opportunities for him locally, struck out for New York.

On the plane, he thumbed through Art Diary International—the Yellow Pages for the art world—and made a list of artists to contact. Richard Serra was at the top. “I went to knock at his door,” he says, recalling how the artist’s studio manager interrogated him before calling several hours later with an offer of a short gig. Ancart also worked for Jenny Holzer and gradually found a community of artists and art professionals who helped him forge a career. Those include the curator David Breslin, who in his job at the Menil Collection in 2016 acquired and exhibited 27 oils on paper of mountains, billboards and moonscapes that Ancart had painted roadside during a cross-country trip in his Jeep.

Ancart believes that the wear and tear on his handball court will only improve its aesthetics. “I have the feeling that the urban flora will take over,” he says. “They’re asking me, what will you do if someone graffitis it? I’m like, take the brush and cover up the graffiti—or not. We will see. It’s going to be bulletproof because it’s exactly what’s happening in the reality. How could it age badly?”